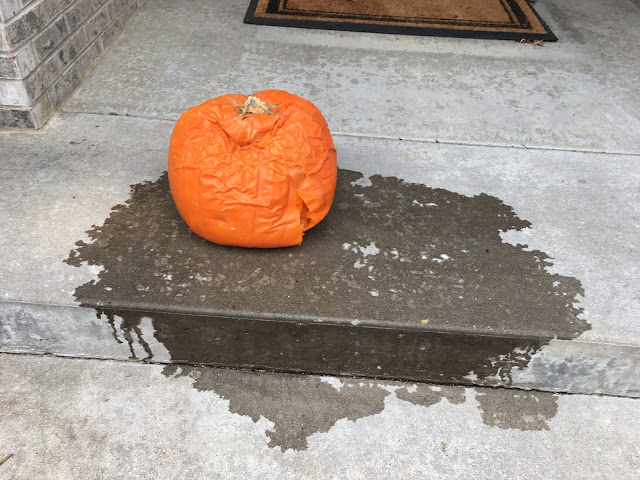 Note to self: in the future, don't leave pumpkins on the front porch through hard freezes.

At our latitude, temps are typically in the 40s in early November, and decorative pumpkins can be left until about Thanksgiving.  Not this year; arctic cold arrived with killing frosts and hard freezes weeks ahead of schedule.  Glad I got my dahlias out of the ground promptly.

I loaded this fellow into a wheelbarrow and gave him a ride to the woods behind the house, where it will provide some welcome nutrition for local critters.

Addendum:  Relevant article at The Atlantic this week - What To Do With That Rotting Pumpkin Corpse.


You might be tempted just to throw them all away—and that’s certainly what many people do. Every year, more than 1 billion pounds of pumpkin get tossed out and left to rot in America’s landfills. Some are thrown away the day after Halloween, contributing to the 30.3 million tons of annual food waste in the U.S. When left to decompose in a landfill, that food waste produces methane gas, a greenhouse gas that’s far more potent than carbon dioxide. (It’s not just in the U.S.; The Guardian reported that in the U.K., people are expected to throw away a record 8 million pumpkins this year.)

Suggestions at the link.