You notice the blue because of the black

In this segment from the BBC's Planet Earth series, David Attenborough describes the courtship ritual of the superb bird-of-paradise.

Not explained in the video is the science behind that extraordinary color.  For that, we need to turn to a new Nature Communications publication: 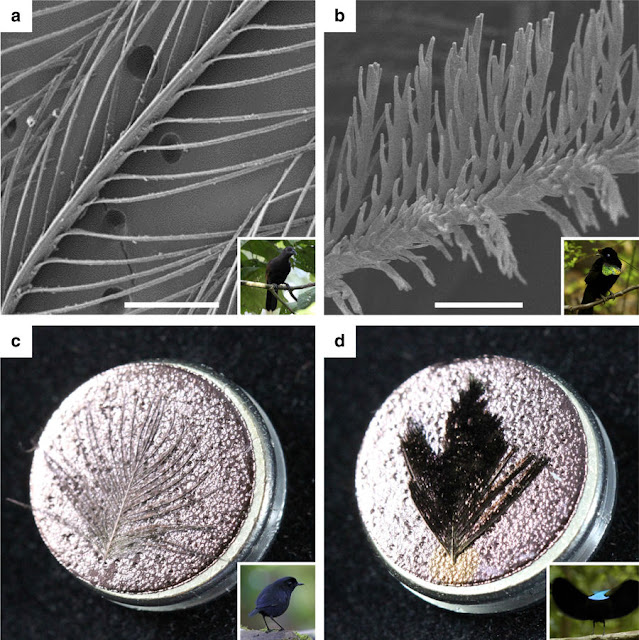 [normal black feather on the left, "super-black" on the right; details at the link]

By increasing the number of times light scatters, structurally absorbing materials can increase total light absorption to produce a profoundly black appearance. For example, a shiny metal with a smooth surface that reflects 30–70% of visible light can be converted to a matte black material that reflects less than 5% of light by adding microstructural surface complexity that increases structural absorption. Natural examples of structural absorption have been described in the wing scales of butterflies...

Our findings demonstrate that super black bird of paradise feathers structurally absorbs up to 99.95% of directly incident light... Interestingly, in both butterflies and birds of paradise, super black patches are always adjacent to bright, highly saturated, and structural colors... We hypothesize that structurally absorbing super black patches evolve because they exaggerate the perceived brilliance of adjacent color patches through a sensory/cognitive bias inherent in the vertebrate mechanism of color correction.

More at the link.  Fascinating.  Via Wired.