Pyramus and Thisbe, and the wall between them 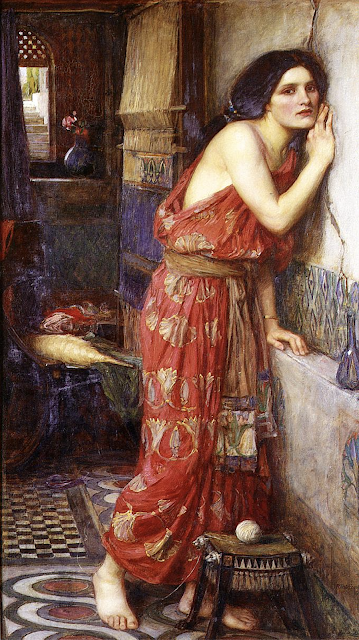 This couple was referenced recently in a book I was reading, and I realized I knew nothing about their story, so here it is:


In Ovid's Metamorphoses, Pyramus and Thisbe are two lovers in the city of Babylon who occupy connected houses/walls, forbidden by their parents to be wed, because of their parents' rivalry. Through a crack in one of the walls, they whisper their love for each other. They arrange to meet near Ninus' tomb under a mulberry tree and state their feelings for each other. Thisbe arrives first, but upon seeing a lioness with a mouth bloody from a recent kill, she flees, leaving behind her veil. When Pyramus arrives he is horrified at the sight of Thisbe's veil, assuming that a wild beast has killed her. Pyramus kills himself, falling on his sword in proper Babylonian fashion, and in turn splashing blood on the white mulberry leaves. Pyramus' blood stains the white mulberry fruits, turning them dark. Thisbe returns, eager to tell Pyramus what had happened to her, but she finds Pyramus' dead body under the shade of the mulberry tree. Thisbe, after a brief period of mourning, stabs herself with the same sword. In the end, the gods listen to Thisbe's lament, and forever change the colour of the mulberry fruits into the stained colour to honour the forbidden love.

There are older versions of the myth, noted at Wikipedia (whence the image by John William Waterhouse, 1909).  Romeo and Juliet is an obvious adaptation.

Our mulberry fruits are purple rather than red, but perhaps it depends on whether the lovers spilled arterial or venous blood.