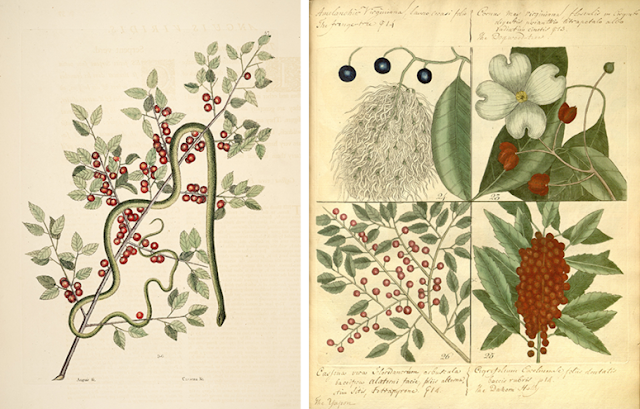 Excerpts from an article at the always-amazing Atlas Obscura:


Cassina, or black drink, the caffeinated beverage of choice for indigenous North Americans, was brewed from a species of holly native to coastal areas from the Tidewater region of Virginia to the Gulf Coast of Texas. It was a valuable pre-Columbian commodity and widely traded. Recent analyses of residue left in shell cups from Cahokia, the monumental pre-Columbian city just outside modern-day St. Louis and far outside of cassina’s native range, indicate that it was being drunk there. The Spanish, French, and English all documented American Indians drinking cassina throughout the American South, and some early colonists drank it on a daily basis. They even exported it to Europe...

Upon export to Europe, cassina was marketed in England under the names “Carolina tea” and “South Sea tea,” and in France as “appalachina,” likely a reference to the Appalachee people.This confusing array of names emphasizes the practicality of the Linnaean classification system, which was still in its infancy when Europeans learned of cassina. William Aiton, an eminent British botanist and horticulturist, director of Kew Gardens, and “Gardener to His Majesty,” is credited with giving cassina the scientific name it bears to this day: Ilex vomitoria. Ilex is the genus commonly known as holly. Vomitoria roughly translates to “makes you vomit.”...

In the earliest days of the Southern colonies—when plantations were being carved out of woodland and luxury imports were rare—cassina drinking was widespread from slaves to plantation owners. But as plantations became larger and more profitable, the nouveau riche demonstrated their wealth by drinking expensive imported tea.

For further discussion of the NON-emetic properties of the tea, see Atlas Obscura.