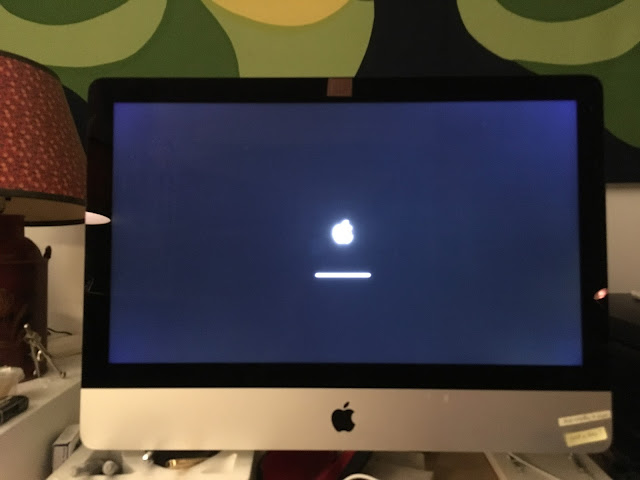 Yesterday when my iMac started up, the usual "susumi" sound was absent and the screen opened up dark instead of grey.  The Apple logo appeared, along with the expected progress bar.

The progress bar evolved way too slowly, then stopped.  After an hour it was still frozen at about 95% complete.  I restarted while zapping the parameter RAM; that accomplished nothing.  And rebooting in the Safe mode (shift key down) didn't help.

So I went to my old Mac to look for help online.  When I rebooted in Recovery mode (command-R), I at least got a response: 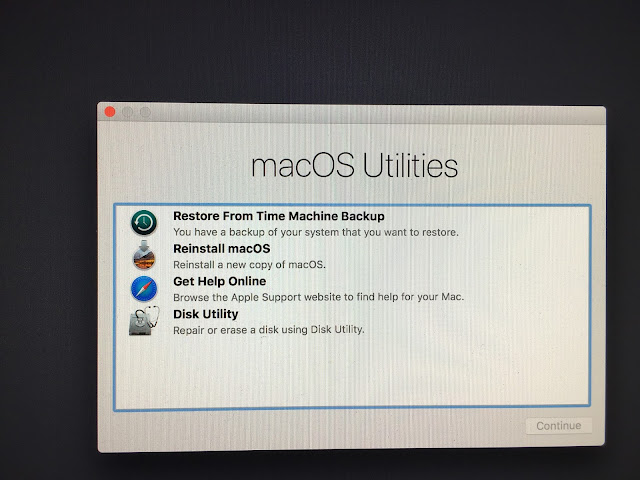 I had already been to multiple other help sites, several of which suggested that the frozen progress bar at the end of the startup process probably indicated a problem with "permissions," which should be fixable using Disk Utility.  So I opened it... 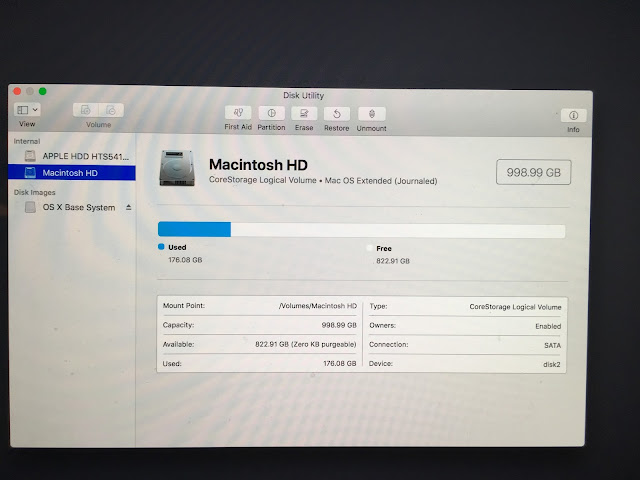 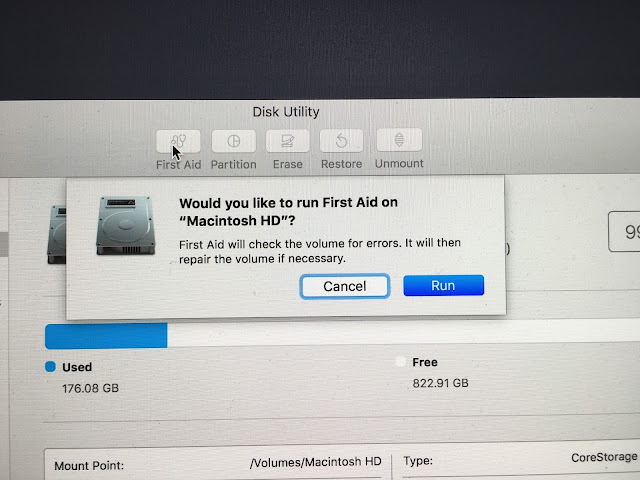 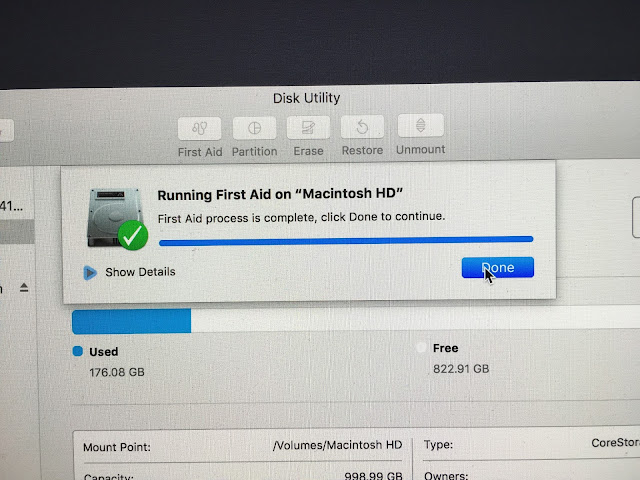 ... but after clicking "Done" the iMac still wouldn't complete the rebooting process.

On my old Mac (the one I'm using right now to access the blog) (running OSX Yosemite 10.10.5), the First Aid program presents the  option of repairing permissions: 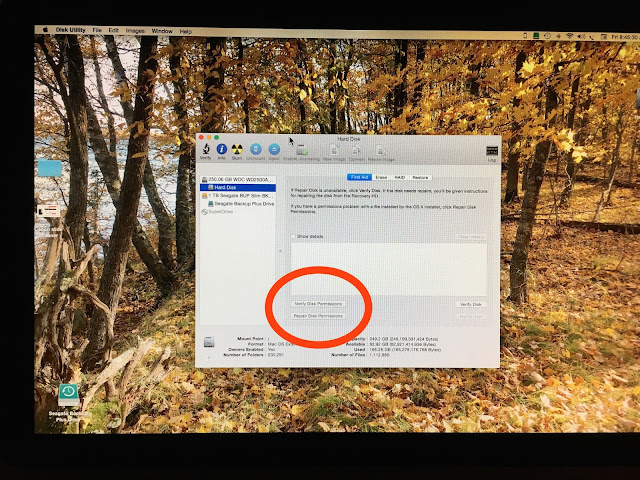 But this new, crashed, iMac running OSX 10.13.something doesn't seem to offer that option.  ???

Of course, his may not be a permissions problem at all.  Does anyone know what might be causing this?

Of possible note, I did try to option of seeking help online at Apple, and the frozen computer did connect me, so much of its guts, including web access, appears to be functional, but I just can't access stored material.

My next option is to restore using a Time Machine backup.  Here's where I have to offer a "mea culpa" and admit that I don't keep the Time Machine constantly attached to the Mac because my desk is so full of gadgets (printers/scanners, digital microscope, USB extender, lamp, SAD light etc.  So my last complete backup was in mid-February.  I can restore from there, losing a couple months of bookmarks for the blog (many hundreds of them) and various Word documents and uploaded photos.

More importantly, restoring to February status will lose my entire Turbotax tax return, which I had joyfully completed yesterday.  Today was to be the day to file online and submit payment.  I don't know if I can retrieve the entered data from Turbotax online on this old computer or whether it's only stored on the crashed hard disk.

So I am frantically looking for some way to revive the Mac with the frozen progress bar.  I'll be seeking help from Apple online and perhaps over the phone.  In the meantime I'm seeking help from readers who might have any suggestions for me.

This isn't the end of Life As We Know It, but absent a satisfactory recovery, especially of my tax data, I'm just not going to have time to blog for at least several weeks.

You learn something every day.  Reader Charlie has introduced me to rebooting in Verbose mode (command-V).  I just did so, and the screen lit up with line after line of TMI-for-an-English-major: 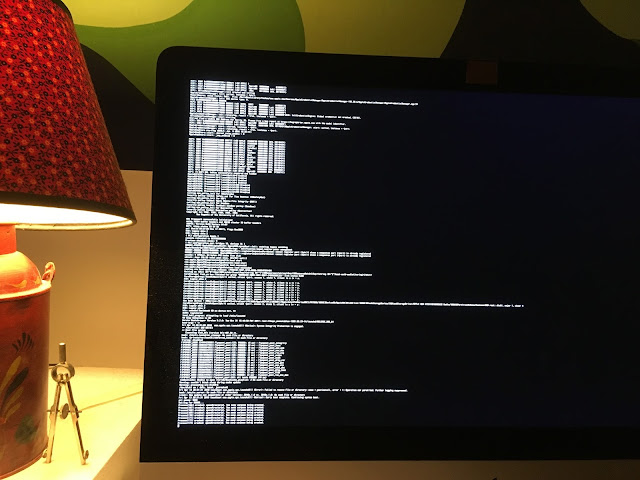 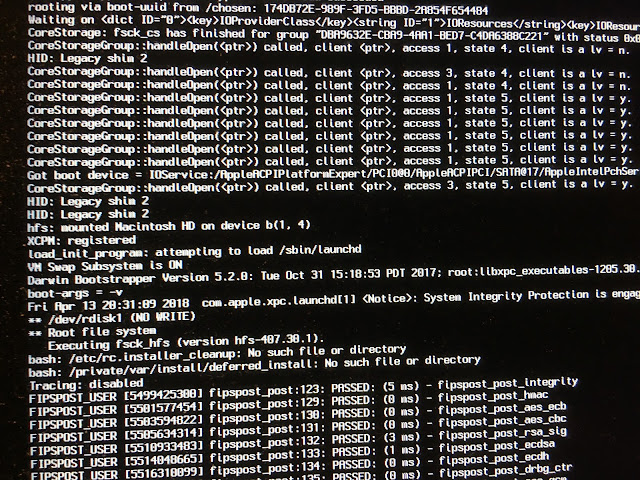 Eventually it settled in to a mantra of "too many corpses" - 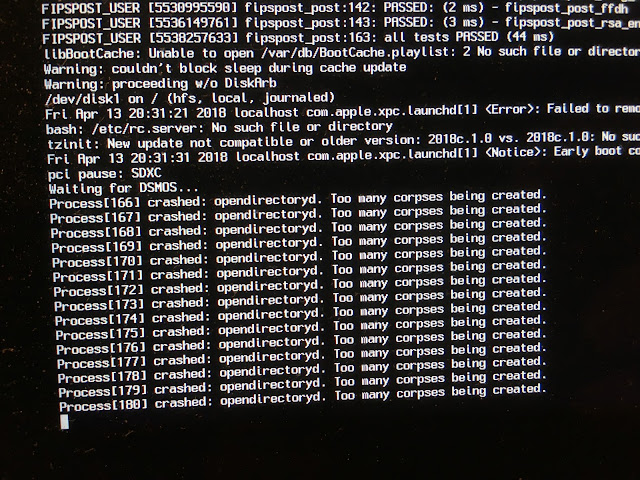 That continued past the 300th iteration before I finally had mercy on it and powered it down for the night.

Charlie, there may be a clarification of what's going on earlier in the readout, but I couldn't find a way to scroll up to get closeup photos.  Tomorrow after the Mac and I both get some rest, I'll try another Verbose boot with camera in hand.

If I ever start a band, "Too Many Corpses" might be an interesting name.  I've appended it to the title of this post for now...

Excellent information at Robin Monks for any reader experiencing the same problem. 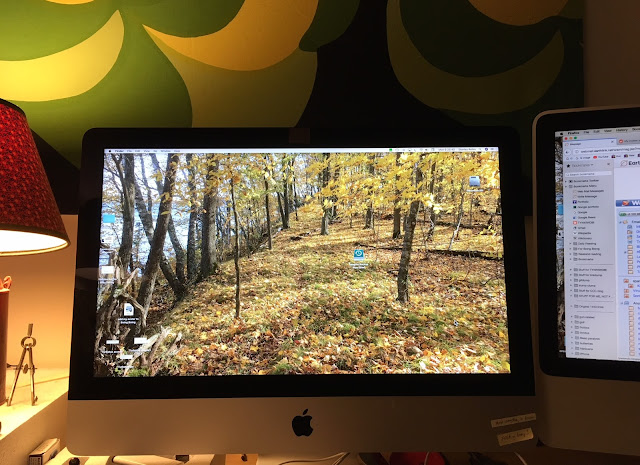 It looks like we are back in business, boys and girls.  TLDR: I reinstalled the operating system.  I don't THINK I lost anything, but I'm not touching anything right now until Time Machine is finished making a complete backup of whatever's there.

I'll leave some notes in the comment thread for those interested in the technical aspect of the problem and its solution.

Best case scenario I'll still be busy tonight and tomorrow with taxes and eBay and stuff.  TYWKIWDBI should reanimate Wednesday or Thursday.

Gloom returns the next morning - 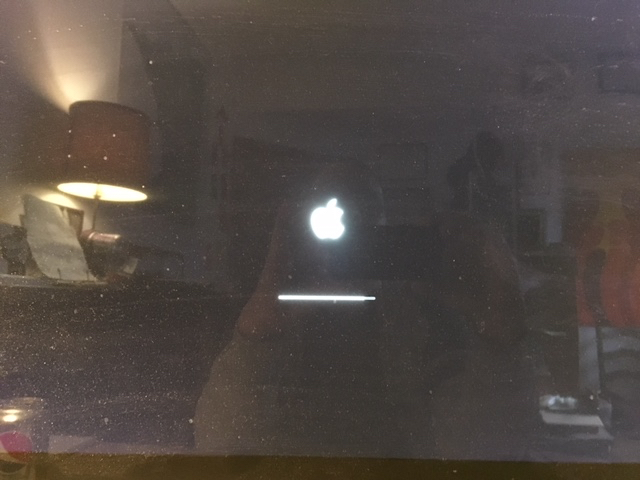 When I pushed the start button and heard no susumi chime and the screen started to open black instead of grey I had a sinking feeling.  The progress bar has been frozen at 99% for half an hour.

Thankfully I did get my taxes finished and e-filed just before midnight last night.

Now to resume troubleshooting.  Apparently reinstalling the OS was a workaround rather than a fix.  Whatever gremlin is doing this is still in there.  I'll be rebooting in various modes and probably ordering a USB-to-Thunderbolt or Firewire-to-Thunderbolt connector from Amazon, or else I'll just haul the iMac over to the Apple store.

Addendum #5: problem gone (for the moment)

The sequence of events is getting a bit fragmented between the text of this post itself and the ever-enlarging Comment thread below.  I don't have time to "optimize" the narrative, but I'll summarize with another addendum -

When the frozen progress bar first appeared, rebooting in Safe mode (space bar) didn't help.  After I used the Recovery mode reboot (R) to reinstall the operating system (which incidentally also updated from OSX 10.13.3 to 10.13.4) I was able to access the desktop.

So I restarted Safe mode, got to the desktop and went to System Preferences > Users and Groups to see what my "Login items" are. There were 6 of them: System Events, iAntiVirus, Microsoft AU Daemon, Adobe Resource Synchronizer, Dropbox, and SMART reporter.

I started looking some of them up to see what I could maybe do without.  Never did find exactly was "System Events" was.  The Microsoft "AU Daemon" is an AutoUpdater for Microsoft Office.  Dropbox and SMART reporter I remember as being add-ons that I never have used directly.

I couldn't find a way to "turn them off and back on" so it was late in the evening and I said (literally) WTF I'm just going to delete them.  Did so, pulled down the Restart command - and the iMac opened to the desktop !!  I was so happy I went directly to Civilization V and finished my Genghis Khan campaign.

This morning was the acid test.  Would I need a Safe Mode reboot?  Nope.  Started up fine.f

I don't know if the problem is fixed or dormant.  I could have an occult malignancy somewhere in the computer, but I'm guessing (it's only that) that one of the startup items caused a conflict with some other item that had been updated, or it became corrupted/went insane.  It would be ironic if the glitch that I was calling a "gremlin" turns out to be Microsoft's "Daemon."

If this problem stays fixed with this relatively simple intervention that can be performed by any elderly English major, I should probably revise the title of this post with some keywords that would be useful to others searching the same problem.

So, things are working and I have a current TimeMachine backup.  I also have dozens of new links for the blog that I bookmarked on my old iMac.  Eventually I should probably run some diagnostics.  But first, real life calls.  We're getting yet another snowstorm and I have some paperwork to attend to.

Barring surprises, I should be able to resume blogging on Friday.