"Below Suspicion" and "Patrick Butler for the Defense" 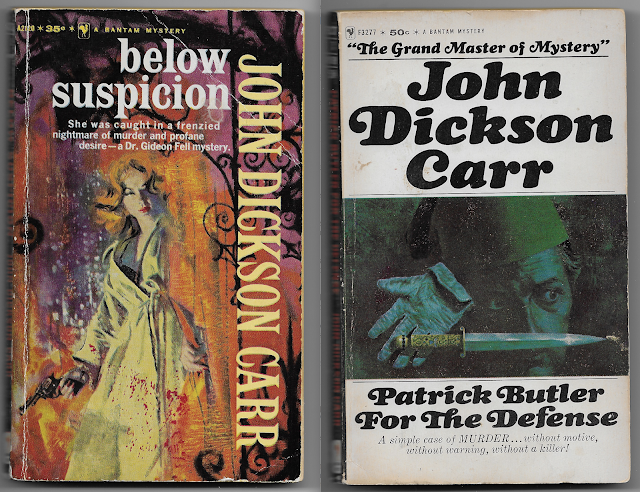 I started my review of all of John Dickson Carr's detective novels with the classic "It Walks By Night," featuring detective Henri Bencolin, and then covered Bencolin's other four mysteries in two posts (here and here).  In December I reviewed detectives Rossiter and Gaunt in "Poison in Jest and The Bowstring Murders."

Below Suspicion (1949)
John Dickson Carr introduces Patrick Butler, an arrogant and borderline unlikeable London attorney and self-styled sleuth, who in this novel is assisted by Gideon Fell.  Fell was well-known to the reading public by 1949, and well-known to the characters of this story ("you're the one - aren't you - who knows all about locked rooms"), but plays only a minor supporting role here.  The plot does involve serial poisonings in apparently-locked residences, but the elements of detection are diluted with quite a bit of derring-do and thriller aspects.  I rated the novel 2+ on my 1-4+ scale.  Herewith the interesting gleanings:


"In the room were a "plain deal table and two chairs."  The usage is not of "plain deal" but of a plain "deal table."  Deal = soft wood with implications of "cheap" or "humble."

"If it makes you feel better, my dear, I'll take my fee out of the next rich blacketeer who really is guilty."  The story is set in post-WWII London, so a "blacketeer" is a portmanteau word referring to a black-market racketeer.

"Mrs. Taylor was sitting up in bed, with her hand still on the bell-push.  It's the sort of bell-push they have in hospitals, with a long white cord fastened on the wall..."  Self-explanatory, but I've never heard the term before, despite spending 30+ years in hospitals.

"Acushla!" he chided her... I've already prepared your defense." Anglicization of the Irish word chuisle = "pulse" (of my heart). 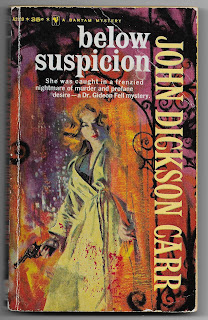 "It was blowing a gale, but there was a dancy kind of moon."  I couldn't find this anywhere.

"Counsel for the defence, producing a key which he said belonged to the back door of his own house, demonstrated that it would fit the back door of "The Priory."  Calling witnesses, he showed that the lock was a "Grierson," which had been fitted to nine-tenths of the houses built in London during the 'fifties and 'sixties of the last century."  I was startled to discover that locks of older houses were not necessarily individually keyed in the post-WWII era.  Note also the use of the apostrophe on the dates to indicate the elided "eighteen," just as Carr uses 'phone on many occasions.

"By the Lord, I think you'd give anything on earth to see me come a cropper!"  A familiar phrase with obvious meaning, but I had to look up the derivation.  It obviously means to suffer a misfortune, but originally meant to take a bad fall off the back of a horse (crupper being the horse's hindquarters).  The Aussie equivalent is said to be "come a gutsa/gutser."

"He was a spiv and a drone and an eel and a butterfly!"  Wiktionary says flashy con artist, low common thief, slacker.  Some connotation of well-dressed, perhaps related to "spiffy?"

"Since it was past nine o'clock, all electric light and heat and gas had to be turned off..."  The novel is set in 1947.  Last year I did browse the book Austerity Britain, but had forgotten that utility shortages extended this long past the end of the war.

"A man was bashed about by two wide-boys in Renshaw's pay."  Thugs in context.  Definitions indicate a man who lives by his wits, wheeling and dealing, or a petty criminal.

"The moley was an extraordinary potato, its surface jagged with the edges of safety-razor blades.  They ground it into your face, twisted it, and--"  I couldn't find this.  ?prison slang

"The so-called club was hot and frowsty, not large and not much cleaner than the billiard-saloon below."  Musty, stuffy, stale, warm.  Variant of frowsy and maybe related to fusty (etymology: 14th c. from fust wine cask, from Old French: cask, tree trunk, from Latin fūstis cudgel, club.)

"Anybody got an electric torch?"  Flashlight, obviously.  Quaint.

"She swept up the knitting-bag and hared out."  Probably to run like a hare; I don't have time to look up everything.

"We were skylarking, that's all.  No harm done."  Originally a nautical term "to jump about joyfully, frolic; to play around, play tricks."  ?presumably related to some behavior of the bird?


Patrick Butler for the Defense (1956)
Carr resurrected Patrick Butler seven years later for what in my estimation is a rather mediocre novel.  The "locked room" is weak, the protagonist unlikeable and the plot muddied with derring-do and comic overtones.  But I did find some interesting tidbits...


I mentioned in reviewing a previous book my surprise at seeing 'phone written with an apostrophe, and earlier in this post 'fifties and 'sixties.  In this story there is mention several times of the 'flu.

"His grey tie was pulled down skew-whiff from the hard collar..."  From askew (obviously) + weft to mean fabric out of alignment.  ?does this lead to "squiffy" meaning "drunk" ?

"The door was closed; or, as the barristers liked to say, sported."  Didn't find any help in the usual places.  Finally located this in the Bartleby definition of sport a door or oak: "To keep an outer door shut. In the Universities the College rooms have two doors, an outer and an inner one. The outer door is called the sporting door, and is opened with a key. When shut it is to give notice to visitors that the person who occupies the rooms is not at home, or is not to be disturbed. The word sport means to exhibit to the public, as, “to sport a new equipage,” “to sport a new tile [hat],” etc."

"Can you think of a place more poetic to plot damnation to the spalpeens than in the sink of their own iniquity?"  More from the Irish: poor migratory farm worker, often viewed as a rascal or good-for-nothing.

"Will you kindly permit me to question my client, so that all of us may not land prematurely in chokey?"  British slang for prison, but why?

"Both of them were speaking ventriloquially, without moving their lips."  The meaning is obvious, but I have never seen the word used as an adverb!

"It wouldn't have been so bad if they hadn't been so incarnadined polite." "Blood-red" by definition - presumably a play on the British use of "bloody."

"No noise!  Want the scotches on us?" The context indicates that it refers to the police.  Probably some British history related to this usage (?). 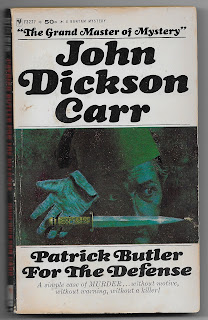 "They had thought Pam a beetle-wit, a dandelion-clock." Wiktionary: "The term is applied when the flower is used in a children's pastime by which the number of puffs needed to blow the filamentous achenes from a dandelion is supposed to tell the time."  Used here as a derogatory term for stupid or naive.

"Nobody knows.  I think I know.  But that's because more grasses come to me, with secret information..."  Slang term for police informer.

"Butler quietened Hugh as the call-boy, from mere force of habit, banged a fusillade of knocks on the dressing-room door."  A boy or man who summons actors when their presence is required for a performance.  I wonder if this is related to the "Call for Philip Morris" character in old cigarette ads?

"Before another day, I promise you, that damned old fraud will very much regret giving the cut-direct to his own nephew."  I found nothing on this.

"He was in a large and luxurious, if somewhat heavily and loweringly furnished, bedroom..."  With cloudiness or threatening gloom.  From ME louring.

"Across the bedroom a door stood open to a sybaritic bathroom."  From Sybarita, an ancient Greek city in southeastern Italy noted for the luxurious, pleasure-seeking habits of many of its inhabitants.

"On the desk, at one side, lay a heavy stone paperweight.  This would do to smash the ring to flinders; to pound and crush its diamonds, if that were possible..."  Fragments, splinters, probably of Scandinavian origin: compare Norwegian flindra (“splinter”).

In Hugh's office, and between Butler and Lord Saxemund as might have been expected, there was progressing a truly memorable schemozzle."  A state of chaos and confusion, from Yiddish.