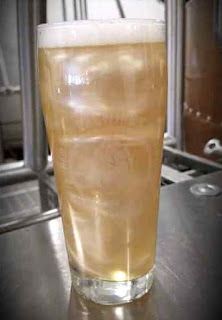 Glitter beer has become the “what will they think of next?” beer story of this spring, part of the larger trend of sparkly foods from doughnuts to pizza and cupcakes. Many news outlets have run stories of local breweries jumping into the fad...


Eichelberger said the German-made glitter he’s using does not affect flavor. It contains titanium
dioxide — a white compound that’s used as a pigment in paint and sunscreen — and tiny flakes of mica, a pearlescent mineral that’s the same stuff found in kids’ craft projects and teenagers’ hair.

All of that sounds not super great to put in your body, but if the Food and Drug Administration says it’s safe (it does), let’s have a glitter beer party! (Really, though, titanium dioxide is commonly used as a food coloring, and mica flakes have been in toothpaste for years.)...

Glitter beer has incited many eye rolls and much hand-wringing from purists, especially on beer Twitter. But appearance has always been a part of beer evaluation, and rather serious beer writer Jeff Alworth noted on his “Beervana” podcast that glitter allows a drinker to follow the usually hidden convection cycle of a beer as it is agitated while pouring and drinking.