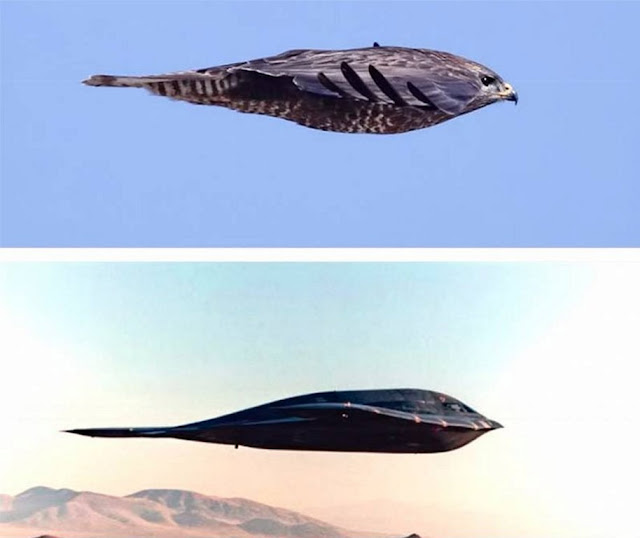 One of these is a Peregrine falcon.  The other is a B-2 bomber.


The peregrine falcon reaches faster speeds than any other animal on the planet when performing the stoop, which involves soaring to a great height and then diving steeply at speeds of over 320 km/h (200 mph), hitting one wing of its prey so as not to harm itself on impact. The air pressure from such a dive could possibly damage a bird's lungs, but small bony tubercles on a falcon's nostrils are theorized to guide the powerful airflow away from the nostrils, enabling the bird to breathe more easily while diving by reducing the change in air pressure. To protect their eyes, the falcons use their nictitating membranes (third eyelids) to spread tears and clear debris from their eyes while maintaining vision. A study testing the flight physics of an "ideal falcon" found a theoretical speed limit at 400 km/h (250 mph) for low-altitude flight and 625 km/h (388 mph) for high-altitude flight. In 2005, Ken Franklin recorded a falcon stooping at a top speed of 389 km/h (242 mph).

Discussion of biomimetics/biomimicry here.  Via.