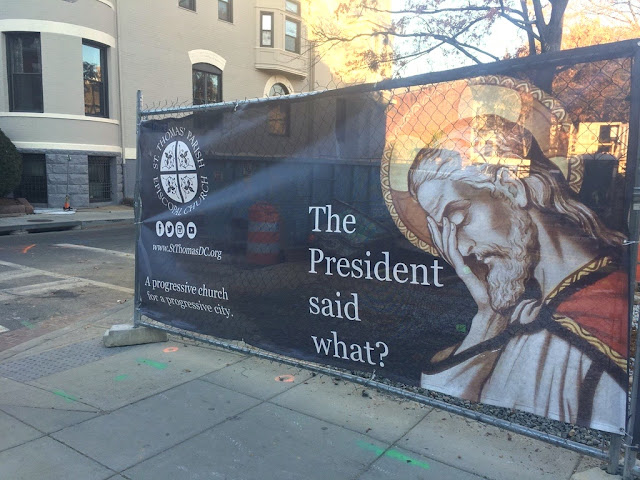 (For a background on this type of linkdump, see my introductory paragraphs on Trump clump #1 back in August.  Trump clump #2 was in November.  Here's what I've bookmarked since then.)

As of November: "Over the Thanksgiving weekend, the Secret Service reportedly spent $7,470 on golf cart rentals for its agents and the president while at Trump's private Florida club, Mar-a-Lago, according to federal purchase orders reviewed by USA Today. In total, the publication reports that the Secret Service has spent $144,975 on golf carts in the 11 months since Trump assumed office. Golfing is such an integral part of Trump’s routine — he's been on 81 trips to golf properties while in office — that the Secret Service had to sign a ongoing contract with Golf Cart & Utility Distributors, a Florida cart rental company, which now amounts to $69,430."

Are you old enough to remember the Talking Heads' video Once in a Lifetime ?  Here it is reconfigured to incorporate Donald Trump:

"On Thursday morning, Melania Trump followed the annual ritual done by all first ladies in the modern era. The @flotus Twitter account posted a photo of herself with President Donald Trump at the Pearl Harbor Memorial in Hawaii. But the tweet listed the date of the Pearl Harbor Attack as “11/7/1941,” which was a month off."

In December, the editorial board of USA Today took the gloves off:


With his latest tweet, clearly implying that a United States senator would trade sexual favors for campaign cash, President Trump has shown he is not fit for office. Rock bottom is no impediment for a president who can always find room for a new low...


A president who would all but call Sen. Kirsten Gillibrand a whore is not fit to clean the toilets in the Barack Obama Presidential Library or to shine the shoes of George W. Bush.

This isn’t about the policy differences we have with all presidents or our disappointment in some of their decisions. Obama and Bush both failed in many ways. They broke promises and told untruths, but the basic decency of each man was never in doubt.
Donald Trump, the man, on the other hand, is uniquely awful. His sickening behavior is corrosive to the enterprise of a shared governance based on common values and the consent of the governed...

The nation doesn’t seek nor expect perfect presidents, and some have certainly been deeply flawed. But a president who shows such disrespect for the truth, for ethics, for the basic duties of the job and for decency toward others fails at the very essence of what has always made America great.

Trump tweets plotted by time of day as of November: 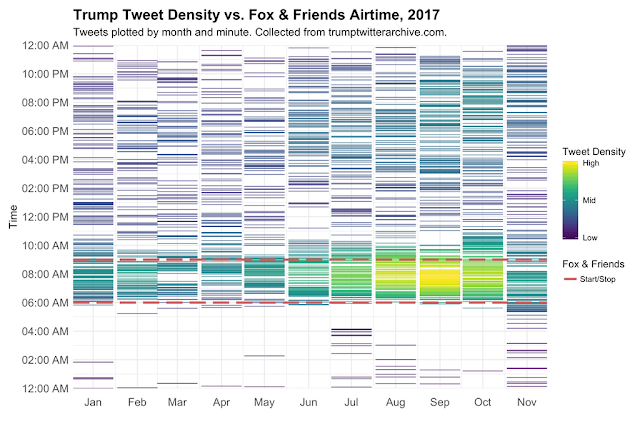 "In a speech to graduates of the FBI Academy, Trump talked about calling on Congress to end "chain migration" and "visa lottery," and compared legal immigrants to trash."  Informed discussion thread at Boing Boing.

"The glittering 72-story tower on Panama City’s oceanfront is a standout. Shaped like a sail, it was the tallest building in Latin America when it opened in 2011. It also marked the Trump Organization’s first international licensing venture. And, according to a new report from TED Prize winner Charmian Gooch and her colleagues at Global Witness, this particular building, known as the Trump Ocean Club, is a textbook example of how money gleaned through crime and corruption can enter global markets through what look like legitimate deals. Global Witness’ year-long investigation revealed how members of drug cartels and the Russian mafia used real estate in the building to launder money."

Trump tweet: "We are the highest taxed nation in the world."  Krugman rebuttal tweet: "We are, as pointed out many times, lowest-taxed major advanced nation.  Repetition of this lie shows contempt for the intelligence of the public."

Trump often cites the rise in the stock market as validation of his presidency.  The Washington Post provides some perspective: 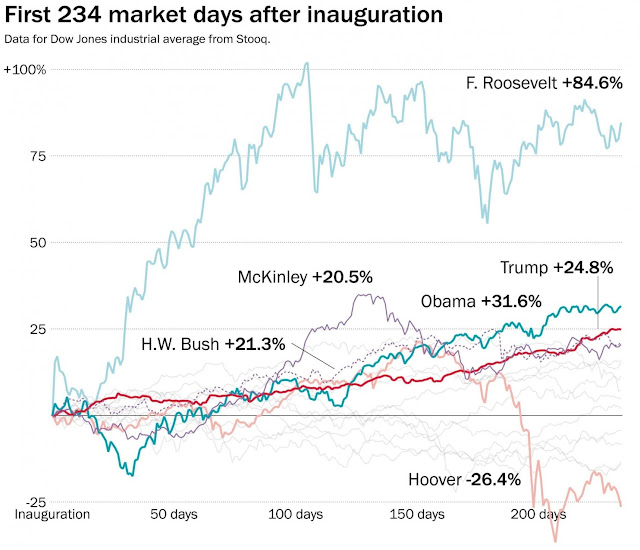 Harper's "Weekly Review" for the end of December offered a scathing summary of recent events.

In January, some reminders re accusations that the Mueller investigation is a Democratic "witch-hunt":  Robert Mueller is a registered Republican, first appointed to a federal position by Ronald Reagan, recently appointed as a Special Counsel by a Republican Deputy Attorney General nominated by a Republican president.

The Atlantic considered this "the most irresponsible tweet in history"

"North Korean Leader Kim Jong Un just stated that the “Nuclear Button is on his desk at all times.” Will someone from his depleted and food starved regime please inform him that I too have a Nuclear Button, but it is a much bigger & more powerful one than his, and my Button works!"

"Stand back, everyone.  Stable genius at work": 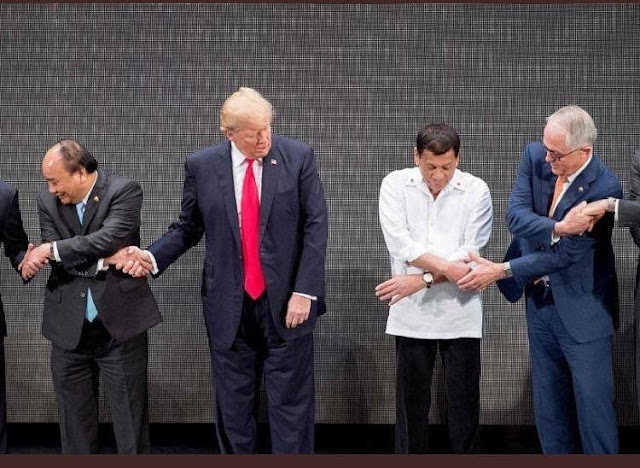 An article in The Atlantic in January asked "Is there something neurologically wrong with Donald Trump?" - "Viewers of Trump’s recent speeches have begun noticing minor abnormalities in his movements. In November, he used his free hand to steady a small Fiji bottle as he brought it to his mouth [pix at the link]... Then there was an incident of slurred speech [video at the link].. Trump has exhibited a “clear reduction in linguistic sophistication over time” with “simpler word choices and sentence structure.”

A sample Trump day goes like this: "On Tuesday, Trump has his first meeting of the day with Chief of Staff John Kelly at 11 a.m. He then has "Executive Time" for an hour followed by an hour lunch in the private dining room. Then it's another 1 hour 15 minutes of "Executive Time" followed by a 45 minute meeting with National Security Adviser H.R. McMaster. Then another 15 minutes of "Executive Time" before Trump takes his last meeting of the day — a 3:45 p.m. meeting with the head of Presidential Personnel Johnny DeStefano — before ending his official day at 4:15 p.m."

One suggestion on how to pay for the rebuilding of Puerto Rico.

Donald Trump tried to sue Macmillan, publishers of the new Fire and Fury book.  The CEO ("We cannot stand silent. We will not allow any president to achieve by intimidation what our Constitution precludes him or her from achieving in court") and the company's outside counsel responded: "...your attempt to use private contracts to act as a blanket restriction on members of the government speaking to the press is a perversion of contract law and a gross violation of the First Amendment. No court would support such an attempt to silence public servants and the press."  With an interesting comment thread at Boing Boing.

Trump's new ambassador the the Netherlands discovered that he couldn't bullshit Dutch reporters:
“If you are truly an honest and wise man,” another journalist asked, “would you please take back the remark about burned politicians — or name a politician that was burned in the Netherlands?” When Hoekstra, who was born in the Netherlands but raised in Michigan as a staunch social conservative, called for another question, two reporters asked him, “Why don’t you answer the question?” Another told the former member of U.S. Congress, “This is the Netherlands; you have to answer questions.”

Meanwhile" John Feeley, the U.S. ambassador to Panama, has written and submitted a letter of resignation, saying he is leaving the office on principle and no longer feels comfortable serving in the Trump administration."

In response to Donald Trump's comments demeaning some foreign nations, the San Francisco Federal Building was recently illuminated at night.

And finally, last night a special election for the Wisconsin state legislature yielded some surprising results with possible implications for the mid-term elections coming this November:

A month after deep-red Alabama voted for a Democratic senator, a deep-red Wisconsin district rejected a Republican candidate for a state Senate seat.

Patty Schachtner picked up 55 percent of the vote to defeat Republican Rep. Adam Jarchow. She credited the win to her message: "Be kind, be considerate and we need to help people when they're down," she told the Associated Press. She said that "negative mailings" against her from third-party groups likely influenced voters to rally around her.  Schachtner's win is sending alarm bells off in Republican circles, as the district has traditionally been a Republican stronghold. It was carried by Mitt Romney during the 2012 presidential election — even though he lost Wisconsin overall, as well as by Donald Trump (by a 55-38 margin) during the 2016 presidential election... 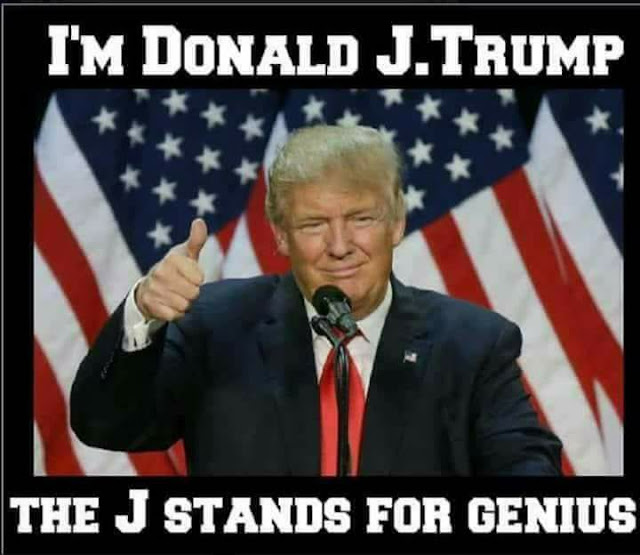 I frankly don't enjoy writing these posts, but they seem to be cathartic.  I'll minimize Trump mentions in the blog for the next three months or so, and then do another purge.

The comments are closed for this post, because the comment thread would not be a forum for rational discussion, so lets move on to more interesting matters.