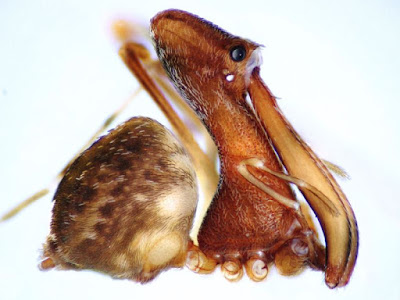 As explained by Smithsonian:

Formally known as Archaeids, the creatures are perhaps best described by their common name: “pelican spiders.” Each spider in this group boasts an extended, arching carapace and two extra-long mouthparts (called chelicerae), creating the illusion of a “neck” and “beak.” The resemblance to pelicans is uncanny.

They live in Madagascar and eat other spiders.  And as the "Archaeid" family name suggests, this is an ancient lineage, probably dating back 180 million years to before Madagascar was an island.  More at the link.