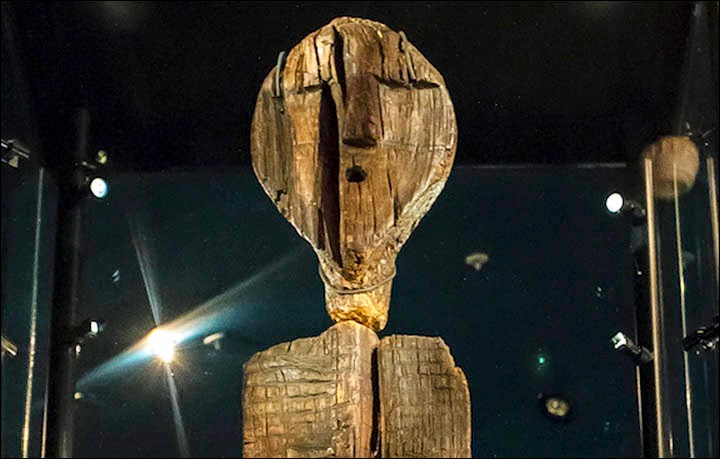 It may be older than the Egyptian pyramids:


This ancient example of human creativity was recovered in January 1890 near Kirovgrad but there remains uncertainty over its age, believed to be around 9,500 years old. Made of 159 year old larch, it is covered with Mesolithic era symbols, which are not yet decoded. Some 2.8 metres in height, it appears to have seven faces.

It was protected down the millennia by a four metre layer of peat bog on the site of an open air gold mine...

Now, German scientists secured a grant which they hope will provide the Idol's age to within half a century.

'There is no such ancient sculpture in the whole of Europe. Studying this idol is a dream come true', said Professor Thomas Terberger, of the Department of Cultural Heritage of Lower Saxony.

Reposted from 2015 to add some interesting information:


New scientific findings suggest that images and hieroglyphics on the wooden statue were carved with the jaw of a beaver, its teeth intact.

Originally dug out of a peat bog by gold miners in the Ural Mountains in 1890, the remarkable seven-faced Idol is now on display in a glass sarcophagus in a museum in Yekaterinburg. Two years ago German scientists dated the Idol as being 11,000 years old.

At a conference involving international experts held in the city this week, Professor Mikhail Zhilin said the wooden statue, originally 5.3 metres tall, was made of larch, with the basement and head carved using silicon faceted tools. 'The surface was polished with a fine-grained abrasive, after which the ornament was carved with a chisel,' said the expert. 'At least three were used, and they had different blade widths.

The faces were 'the last to be carved because apart from chisels,  some very interesting tools - made of halves of beaver lower jaws - were used'.

He said: 'Beavers are created to carve trees. If you sharpen a beaver's cutter teeth, you will get an excellent tool that is very convenient for carving concave surfaces.'..

The professor has found such a 'tool' made from beaver jaw at another archeological site - Beregovaya 2, dating to the same period.

The "basement" referred to is probably what is more conventionally referred to as a "pediment." More information and photos at The Siberian Times.  This full-length photo via Wikipedia: