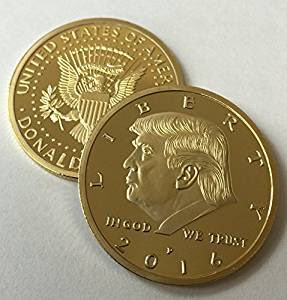 Earlier this summer I received a series of comments and emails from readers asking that I stop writing anti-Trump posts.  Surprisingly, those comments came not from pro-Trump supporters, but from progressives and non-residents who indicated they were getting enough Trump news from other sources and were seeking a little "fresh air" at TYWKIWDBI.  (the sentiment reflected in this comic): 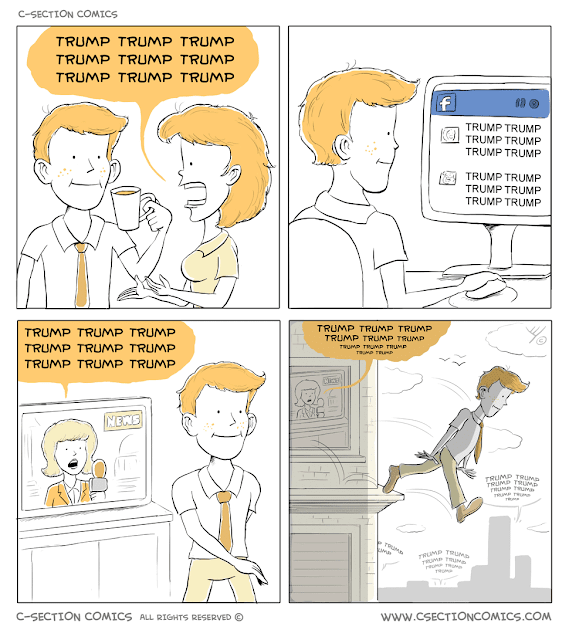 FWIW, here are the political metrics for readers of TYWKIWDBI, as monitored by Quantcast:

(I'm not sure how Quantcast determines these affiliations; I suspect part of the large proportion of "independents" comes from readers in other countries.)

I've been holding back on writing posts about Trump, but I've continued to bookmark the material, and some of it is definitely worth sharing, especially for those readers who don't range as widely on the internet.  I've decided the best compromise is to cluster all the Trump material in a series of "Trump clumps" - basically one-topic linkdumps.  That makes the material available for those interested in it, while allowing the pro-Trump readers, the news-weary, the callous, and disinterested foreigners to zoom past all of it with a quick flick on the mouse.  Here we go...

There is now a Donald Trump "presidential commemorative coin" (image embedded at top).  It's not issued by the U.S. Mint.  It's gold-plated, with an "authentic look, weight, and feel" in a "plastic collector case."

Greenpeace devised a clever way to put graffiti on the U.S. embassy in Berlin without touching the building.

International tourism to the United States has been falling ever since the election of Donald Trump.

J.K. Rowling tweeted"Very much enjoying the German press at the moment. "Earth to Trump..." (explanatory image at the link).

Crawler on CNN: "President's spokesman says he can't speak for the President."

Donald Trump's ancestors changed their surname from "Drumpf" to "Trump."

Video of that iconic incident when Trump's cabinet members were  invited to praise him. 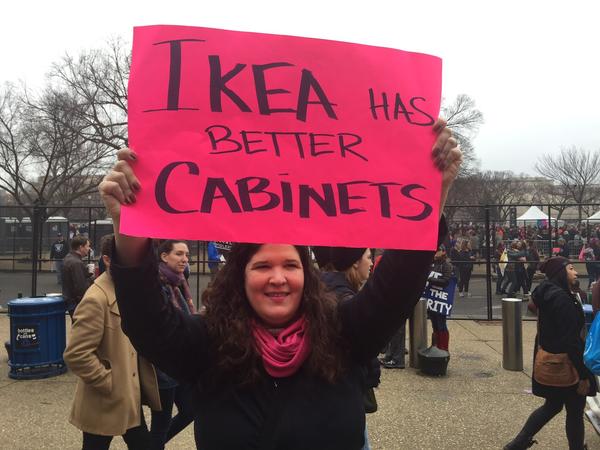 "While President Trump berates Qatar for sponsoring terrorism at the highest levels, he is simultaneously authorizing the country to purchase over $21 billion of U.S. weapons."

There seem to be an endless number of tweets of "Trump criticizing Trump."  Also this one.

"The Washington Post and Partnership for Public Service, a nonprofit, nonpartisan organization, are tracking more than 500 key executive branch nominations through the confirmation process. These positions include Cabinet secretaries, deputy and assistant secretaries, chief financial officers, general counsel, heads of agencies, ambassadors and other critical leadership positions."  As of August 17, 364 of those positions don't even have nominees yet.

"President Trump's Mar-a-Lago Club in Florida has asked permission to hire 70 foreign workers this fall, attesting — in the middle of the White House's “Made in America Week” — that it cannot find qualified Americans to serve as cooks, waiters and housekeepers."

Scaramucci is already gone.  One of his tweets was interesting.  Also his mimicry of the president. 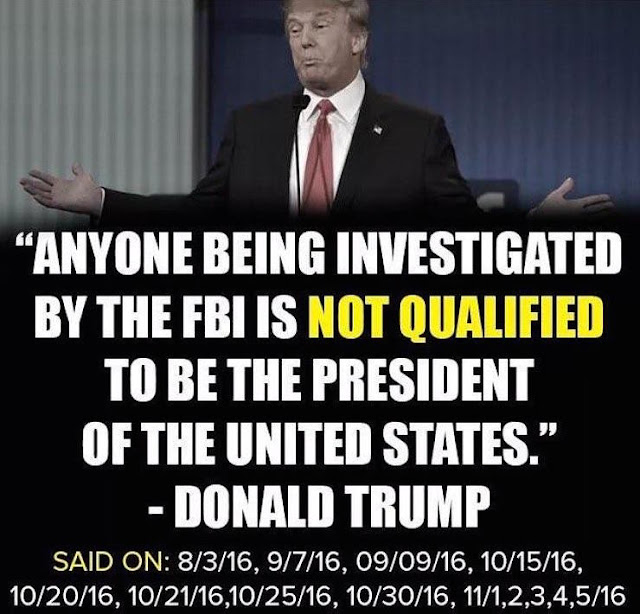 Ivanka Trump tweeted a quote "If the facts don't fit the theory, change the facts," attributing the quote to Albert Einstein.  Here's the perfect rejoinder.

A thoughtful essay by George Will posits that "Trump is something the nation did not know it needed: a feeble president whose manner can cure the nation’s excessive fixation with the presidency. Executive power expanded, with only occasional pauses (thank you, Presidents Taft and Coolidge, of blessed memory), throughout the 20th century and has surged in the 21st... Fortunately, today’s president is so innocent of information that Congress cannot continue deferring to executive policymaking... Furthermore, today’s president is doing invaluable damage to Americans’ infantilizing assumption that the presidency magically envelops its occupant with a nimbus of seriousness..."

"Cohen, who is also a top Democratic ranking Member of the House Judiciary Subcommittee on the Constitution and Civil Justice, announced on Thursday that he would be filing Articles of Impeachment against Trump."

"Ghostwriter Tony Schwartz, who spent over a year with Trump and was the co-author of the memoir, Art of the Deal, has predicted that Trump will resign, maybe as early as by the end of summer."

Tina Fey demonstrates "sheetcaking" as a response to the events in Charlottesville.  She suggests that all sane people deal with the upcoming white power rallies by not showing up because the counterprotest gives them a sense of legitimacy. 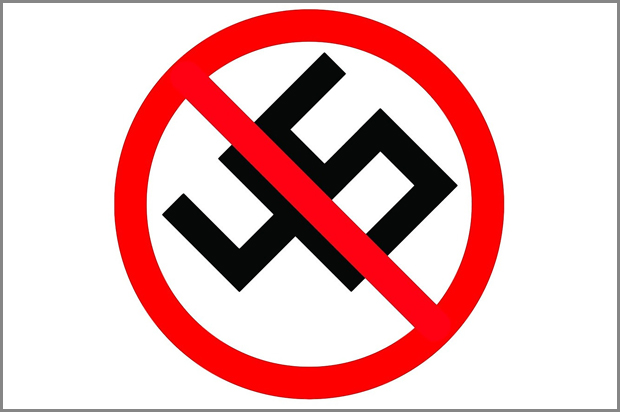 "Mitchell explained that he realized the number, when presented in a block-type font, looks eerily similar to a swastika. So, the artist moved the numbers closer together and tilted them by 45 degrees [and overlaid the numbers with the international symbol for "no"], creating a symbol that would be shared thousands of times on social media following the Charlottesville riots."

I'll close with some excerpts from an op-ed piece in The Guardian:


Like some kind of Shakespearean villain-clown, Trump plays not to the gallery but to the pit. He is a Falstaff without the humour or the self-awareness, a cowardly, bullying Richard III without a clue. Late-night US satirists find in this an unending source of high comedy. If they did not laugh, they would cry. The world is witnessing the dramatic unfolding of a tragedy whose main victims are a seemingly helpless American audience, America’s system of balanced governance and its global reputation as a leading democratic light.

As his partisan, demeaning and self-admiring speech to the Boy Scouts of America illustrated, Trump endlessly reruns last year’s presidential election campaign, rails against the “fake news” media and appeals to the lowest common denominator in public debate. Not a word about duty, service, shared purpose or high ideals was to be found in his gutter-level discourse before a youthful gathering of 30,000 in West Virginia. Instead, he served up a sad cocktail of paranoia and narcissism. It was all about him and what he has supposedly achieved against the odds.

Which, for the record, is almost precisely nothing. After more than six months in office, and despite full Republican control of Congress, Trump cannot point to a single substantial legislative achievement. The bid to repeal the Affordable Care Act, better known as Obamacare, which finally went down in flames in the Senate last week, was the most spectacular and telling of Trump’s failures. His executive orders, such as the racist ban on Muslim travellers and last week’s bigoted attack on transgender people in the military, have mostly run foul of the courts or been pre-emptively ignored by those charged with implementing them...

The common factor in all these situations is Trump’s self-induced powerlessness and ignorance, his chronic lack of credibility and presidential authority and consequent perceptions of US and western weakness. And in the case of all three actual or potential adversaries – North Korea, Iran and Russia – these perceptions are highly dangerous. Precisely because US responses, actions and reactions can no longer be relied upon or predicted, by friends and enemies alike, the potential for calamitous miscalculation is growing. This uncertainty, like the chaos in the White House and the extraordinary disarray of the American body politic, stems from Trump’s glaring unfitness for the highest office. As is now becoming ever plainer, this threatens us all.