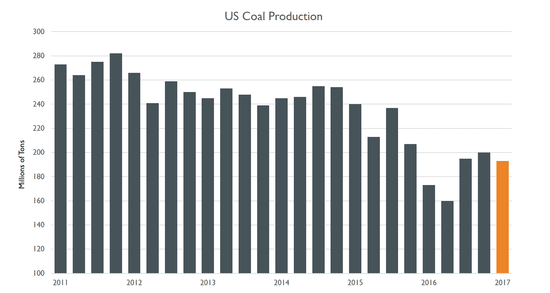 Here's how a Wall Street Journal article reported the current status of coal:


"...coal is showing signs of a revival and breathing economic life into West Virginia and other coal states. […] Yet the Trump Presidency seems to have lifted animal spirits and coal. Weekly coal production has increased by 14.5% nationwide over last year..."

Here's a resounding rebuttal in the Daily Kos:


In their attempt to support Trump, the Wall Street Journal is distorting the truth about coal and cruelly raising the hopes of people who have bought into a false promise. They’re performing a disservice to their readers and to their nation. That big increase in production they’re talking about? It’s generated by comparing the current weekly production with the same week last year...

[see the chart above]