In praise of Hmong farmers 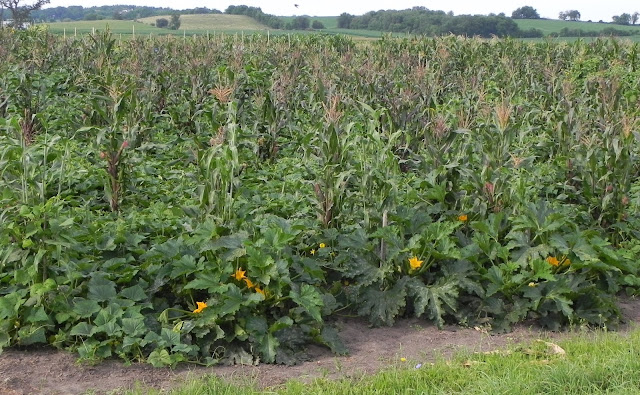 Half of my cultural heritage comes from Norwegian farmers, so I suppose I have an inherent interest in, and bias in favor of, farmers.  I'm living in a state the southern half of which is extensively farmed, but that modern farming is of a kind that would puzzle and dismay my grandparents.

By way of contrast there's the scene in the image embedded above.  I took this photo partway between my home and the local Target store.  In the far distance are uniform green fields of corn interrupted only by treelines on the property edges.  Up close you see a field of corn, planted in rows wide apart (in a conventional "factory" cornfield  you can't walk between rows without getting slashed by leaves from both sides).  And the space between the rows of corn is filled with some type of squash or melon.

This technique is essentially similar to the interplanting used by Native Americans before the arrival of Europeans - corn (maize) planted singly in small hills (fertilized with dead fish), with beans or melons between so that the vines could climb the cornstalks.  Legumes sharing the field replace nitrogen that the corn depletes from the soil.   It is a farming technique that had been used probably for millennia. 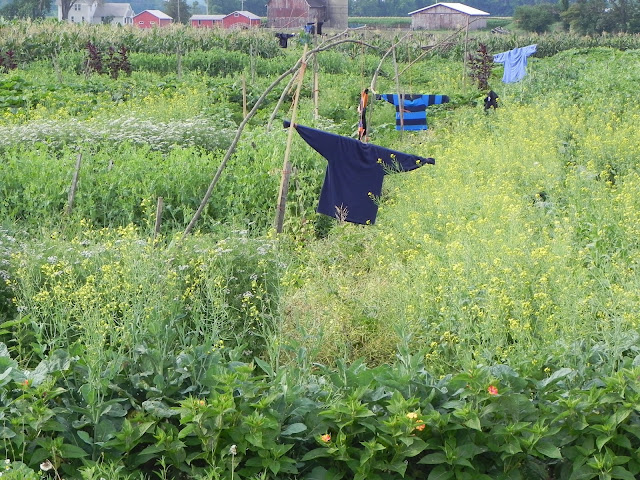 Next to the corn/squash field is another small one filled with herbs, veggies - and homemade scarecrows.  Ten years ago when I drove this road the field was all corn.  Since then the farmer who owns it appears to have sublet a portion of his property to a group of Asian (probably Hmong) farmers.  It is a large community participating in this venture - I see multiple cars out there on weekday mornings with older ladies and men wielding hoes. 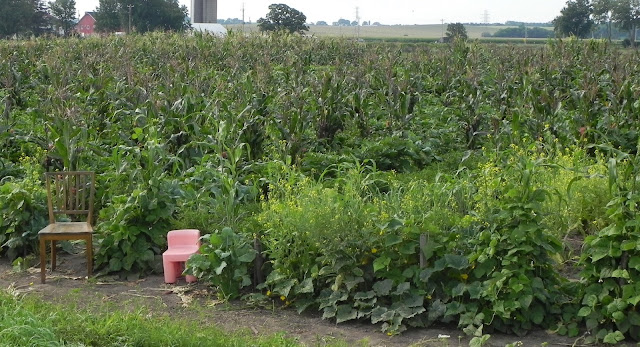 Another feature you won't find in corporate farmfields are chairs.  They are not just for resting, but for working.  The tiny child's chair is there to allow an adult to sit close to the ground in order to weed and to hand-pick pests from the crop.  They may make some use of pesticides, but I like seeing someone shuffling a chair along a row with a glass jar next to them into which Japanese beetles and caterpillars are placed).

These crops will feed many families, and the surplus will be offered at one of the many farmers' markets scattered throughout the city and the suburbs.  Excellent, clean food, pest-free and largely chemical-free, with the fruits polished so they look like a state fair display.

And... I'll bet the farmer who is subletting this portion of his field is coming out ahead financially as well, with the rent for this project probably several multiples above what he would have gotten from 40 acres of factory corn.