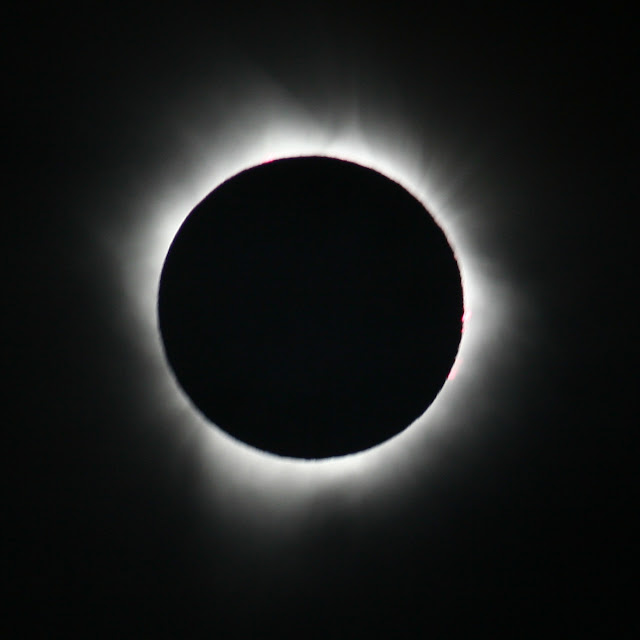 
"You may read that the moon has something to do with eclipses. I have never seen the moon yet. You do not see the moon. So near the sun, it is as completely invisible as the stars are by day. What you see before your eyes is the sun going through phases...

Now the sky to the west deepened to indigo, a color never seen. A dark sky usually loses color. This was a saturated, deep indigo, up in the air... The sun was going, and the world was wrong. The grasses were wrong; they were platinum. Their every detail of stem, head, and blade shone lightless and artificially distinct as an art photographer’s platinum print. This color has never been seen on Earth. The hues were metallic; their finish was matte...

From all the hills came screams. A piece of sky beside the crescent sun was detaching. It was a loosened circle of evening sky, suddenly lighted from the back. It was an abrupt black body out of nowhere; it was a flat disk; it was almost over the sun. That is when there were screams. At once this disk of sky slid over the sun like a lid. The sky snapped over the sun like a lens cover. The hatch in the brain slammed. Abruptly it was dark night, on the land and in the sky. In the night sky was a tiny ring of light. The hole where the sun belongs is very small. A thin ring of light marked its place. There was no sound. The eyes dried, the arteries drained, the lungs hushed. There was no world.

It did not look like a dragon, although it looked more like a dragon than the moon. It looked like a lens cover, or the lid of a pot. It materialized out of thin air—black, and flat, and sliding, outlined in flame... You have seen photographs of the sun taken during a total eclipse. The corona fills the print. All of those photographs were taken through telescopes. The lenses of telescopes and cameras can no more cover the breadth and scale of the visual array than language can cover the breadth and simultaneity of internal experience... But I pray you will never see anything more awful in the sky... It is one-360th part of the visible sky. The sun we see is less than half the diameter of a dime held at arm’s length...

I have said that I heard screams. (I have since read that screaming, with hysteria, is a common reaction even to expected total eclipses.) People on all the hillsides, including, I think, myself, screamed when the black body of the moon detached from the sky and rolled over the sun. But something else was happening at that same instant, and it was this, I believe, which made us scream.

The second before the sun went out we saw a wall of dark shadow come speeding at us. We no sooner saw it than it was upon us, like thunder. It roared up the valley. It slammed our hill and knocked us out. It was the monstrous swift shadow cone of the moon. I have since read that this wave of shadow moves 1,800 miles an hour. Language can give no sense of this sort of speed—1,800 miles an hour. It was 195 miles wide. No end was in sight—you saw only the edge. It rolled at you across the land at 1,800 miles an hour, hauling darkness like plague behind it. Seeing it, and knowing it was coming straight for you, was like feeling a slug of anesthetic shoot up your arm. If you think very fast, you may have time to think, “Soon it will hit my brain.” You can feel the deadness race up your arm; you can feel the appalling, inhuman speed of your own blood. We saw the wall of shadow coming, and screamed before it hit."

Annie Dillard's essay was originally published in 1982.  It will be available online at The Atlantic from now until August 21.  I encourage you to read it there in toto.  The essay makes me want to drive 5-6 hours to experience the totality in person.