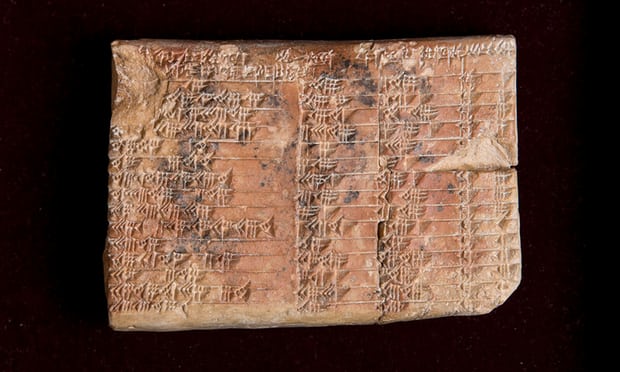 At least two articles this week about new insights in the history of mathematics, derived from a cuneiform tablet:


At least 1,000 years before the Greek mathematician Pythagoras looked at a right angled triangle and worked out that the square of the longest side is always equal to the sum of the squares of the other two, an unknown Babylonian genius took a clay tablet and a reed pen and marked out not just the same theorem, but a series of trigonometry tables which scientists claim are more accurate than any available today.

The 3,700-year-old broken clay tablet survives in the collections of Columbia University, and scientists now believe they have cracked its secrets.

The team from the University of New South Wales in Sydney believe that the four columns and 15 rows of cuneiform – wedge shaped indentations made in the wet clay – represent the world’s oldest and most accurate working trigonometric table, a working tool which could have been used in surveying, and in calculating how to construct temples, palaces and pyramids...

As far back as 1945 the Austrian mathematician Otto Neugebauer and his associate Abraham Sachs were the first to note that Plimpton 322 has 15 pairs of numbers forming parts of Pythagorean triples: three whole numbers a, b and c such that a squared plus b squared equal c squared. The integers 3, 4 and 5 are a well-known example of a Pythagorean triple, but the values on Plimpton 322 are often considerably larger with, for example, the first row referencing the triple 119, 120 and 169.

Of added importance is that the Babylonians used a base 60, which gave greater mathematical precision for fractions than our current base 10.