An excerpt from The Epic of Gilgamesh 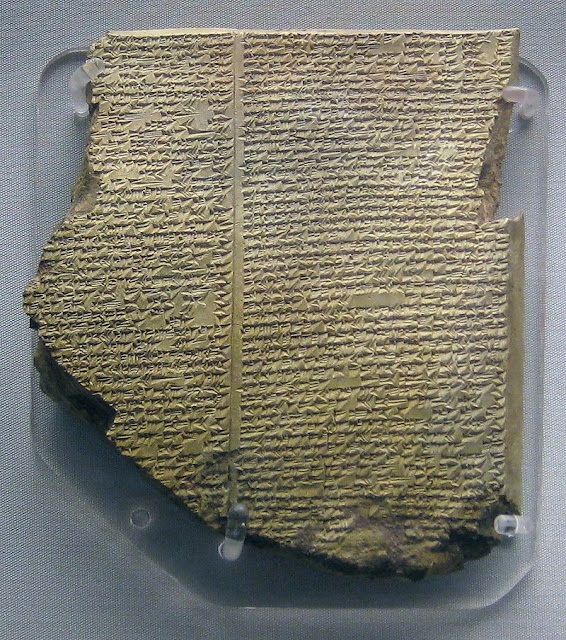 "What I had loaded thereon, the whole harvest of life
I caused to embark upon the vessel; all my family and all my relations,
The beasts of the field, the cattle of the field,
the craftsmen, I made them all embark.
I entered the vessel and closed the door...

When the young dawn gleamed forth,
From the foundations of heaven a black cloud arose...
All that is bright is turned into darkness, The brother seeth his brother no more,
The folk of the skies can no longer recognise each other
The gods feared the flood, They fled, they climbed into the heaven of Anu,
The gods crouched like a dog on the wall, they lay down...

For six days and nights
Wind and flood marched on, the hurricane subdued the land.
When the seventh day dawned, the hurricane was abated, the flood
Which had waged war like an army;
the sea was stilled, the ill wind was calmed, the flood ceased.
I beheld the sea, its voice was silent, And all mankind was turned into mud!
As high as the roofs reached the swamp;...

Cited in The Aztec Treasure House, where it is noted that the tablets (found in Ninevah) were "from the library of King Ashurbanipal, circa 650 B.C.

The embedded image is the Deluge tablet, via Wikipedia.