Everyone is familiar with driverless cars and driverless long-distance trucks.  Next come crewless ships: 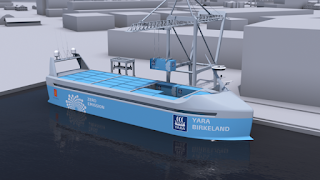 Two Norwegian companies are teaming together to construct a short-range, all-electric coastal container ship that will eventually operate autonomously—eliminating up to 40,000 diesel truck trips per year. The ship, the Yara Birkeland, will begin operations in 2018 with a crew, but it's expected to operate largely autonomously (and crewless) by 2020...

Birkeland will be a relatively small "feeder" cargo ship; its journeys will be short jaunts down a fjord on Norway's Baltic Sea coast from Yara's factory to a larger port. There, containers of fertilizer will be loaded onto larger seagoing ships for international transport. Currently, Yara ships these containers over land.

"Every day, more than 100 diesel truck journeys are needed to transport products from Yara's Porsgrunn plant to ports in Brevik and Larvik," Yara's president and CEO, Svein Tore Holsether, said in a statement issued by the two companies. "With this new autonomous battery-driven container vessel we move transport from road to sea and thereby reduce noise and dust emissions, improve the safety of local roads, and reduce nitrous oxide and CO2 emissions."

Naysayers will note that this development also eliminates jobs.

I read recently (??where???) an interesting commentary on our new robotic world.  The writer noted that we are now reaching the future that was predicted (and lavishly praised) in our childhood - a world where drones and robots do the drudge-jobs, freeing humans from mindless labor and allowing us to redirect our time and energy to more rewarding tasks.  But now, as this future arrives, it seems to be hurting the common man rather than being a benefit.

I believe the author postulated that the reason for the lack of improvement for ordinary people is that because of the structure of current economic systems, the benefits of automation only accrue to owners and management, not to employees.

I would like to find that essay, but I may have read it in a paper magazine (Atlantic, Harpers etc) rather than online.