"It Walks By Night" 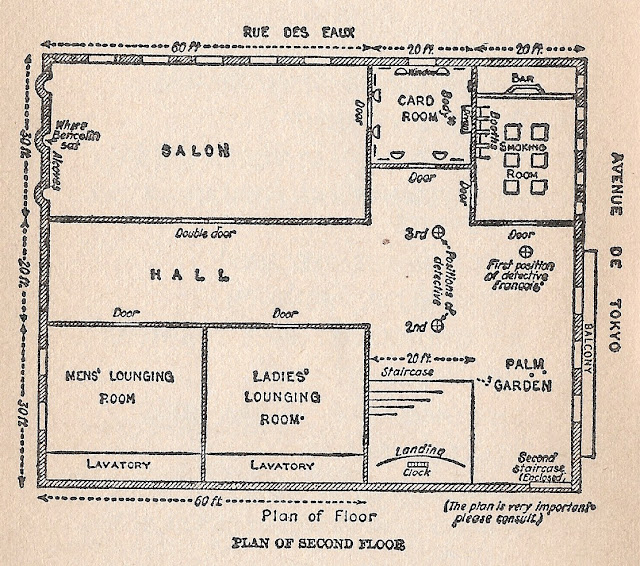 With this post I'm inaugurating a new category in TYWKIWDBI - the locked-room mysteries of John Dickson Carr.   I've been an avid reader of detective stories ever since my childhood discovery of Sherlock Holmes.  College and graduate training consumed my time for a decade, but once I achieved gainful employment and a modicum of free time I resumed reading mysteries and science fiction.  I believe it was in the 1980s when I lived in Kentucky that I read my first John Dickson Carr novel with an "impossible" murder.  Over the next ten years I scoured the used bookstores of Lexington and Indianapolis to locate some of the more elusive titles.   Finally, with the assistance of my wife and the internet I was able to acquire (and read) the corpus of about 70 titles.

Then I put them away.  I had enjoyed them so much that I wanted to read them again, and I hoped that if enough time passed I would forget the clever plot devices that characterize this remarkable series.  I carried the books with me to St. Louis and finally to Madison.  Last week I decided that I'd better not wait too long to get started with the re-reading. 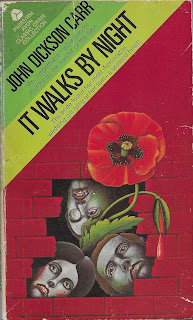 I decided to start with one of Carr's first works - It Walks By Night (1930).  It features Inspector Bencolin - not as well known as Carr's more famous detectives Gideon Fell and Sir Henry Merrivale.  It also features an element familiar to readers of detective fiction of this era - a floor plan (embedded above).  That diagram is essential to understanding and explaining the central mystery: a man was seen walking from the salon into the card room and moments later when Bencolin enters the room he finds a beheaded corpse.  Nobody saw the murderer enter or leave that room.  (In retrospect as I look at that floor plan the murderer's elusiveness is readily explicable...)

A pencilled note inside the cover of my well-worn copy indicates that I read it for the second time in 1983 and solved the "masquerade" - but not the identity of the murderer.

I've just finished re-rereading the book - and for the third time I was not able to predict the identity of the murderer.  I consider this a good prognostic sign to indicate that I can now proceed to re-read the entire series with as much surprise and enjoyment as I garnered on previous occasions.

I originally rated the book 2+ (on my arbitrary scale of 0-4+), and I'll reaffirm that rating, while acknowledging that this was Carr's first novel.

For this series of posts I don't plan to offer any textual criticism, and certainly no spoilers.  My intent is not to review the books so much as to write notes to myself regarding which ones to re-re-reread after another 30 years have passed...

As I usually do when I blog books, I'll excerpt a few interesting items:


"I expect the man at about eleven thirty o'clock."   An uncommon usage (?antiquated, ?regional) which is probably not grammatically incorrect.  It makes me wonder why we say "o'clock" at all if a statement clearly relates to time.  "I'll be home at eleven (o'clock)."

It's not necessary for a mystery writer to be an accomplished wordsmith if they can spin a good story, but I do enjoy encountering a good turn of phrase, such as these-


"He pronounced the word "tourists" with all the fervid sadness and loathing with which Job must have said "boils."

"His face had the terrible triumph of Satan beholding at last the weakness in the armour of Michael..."

"I had a crazy impulse to laugh; he bore such a weird resemblance to William Jennings Bryan reading Darwin."

I was disappointed that Carr had Bencolin offering an unscientific appraisal of the evils of cannabinoids: "You note those brown dried leaves inside the tobacco?  Marihuana or hashish, I think; I can't tell until our chemists analyse it.  They eat green hashish leaves in Egypt; this is a deadlier variety from Mexico... It kills, you know, within five years.  Somebody is most earnestly trying to do away with her."

Carr uses the word "tensity" (rather than "intensity") on several occasions ("a sense of rushing force and tensity, as though a car were hurtling to crash against a tree...)

"When we were returning along the road, he threw the light on his watch and whistled softly.  'Name of a name! it's half past one.  I had no idea the hour was so late...'"   That appears to be a mild curse, or an expletive.  I don't know that I've seen it elsewhere, and a Google search yields nothing.  Perhaps some reader can offer insight on the phrase. [addendum: answered in a reader comment]