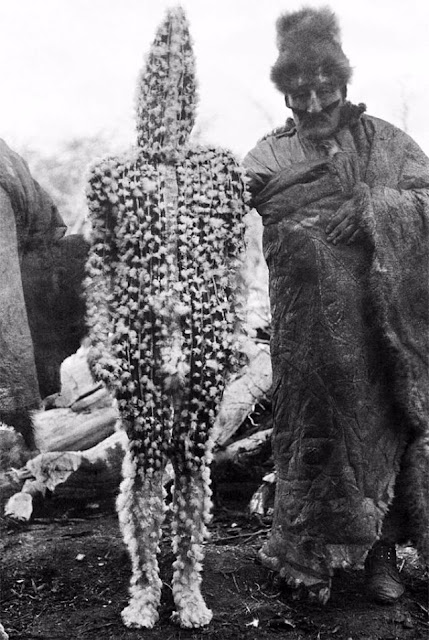 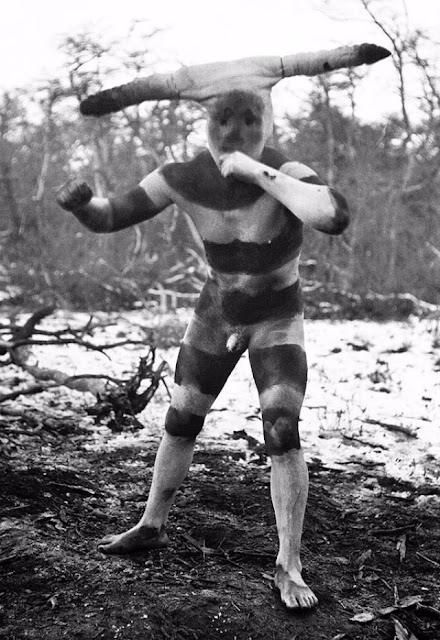 As reported in Vintage Everyday:

The Selk’nam had no chiefs, but were instead led by wise men (‘fathers of the world’) who were believed to possess spiritual power over people, weather and events. The tribe’s most sacred ceremony was the coming-of-age, or the ‘hain’. Adult male members of the tribe would be painted with red, black and white paint and don fur, down and bark costumes, impersonating much feared spirits. Over a period of days or weeks they would conduct a complex initiation to transition boys into manhood.
One of the last such ceremonies was performed in 1920 and recorded by the missionary, Martin Gusinde... Gusinde’s haunting photographs of the Selk’nam, Yamana, and Kawésqar peoples present a way of life that was already on the brink of extinction when he visited the region in 1918–1924 and that has since ceased to exist.

About a dozen more photos at the link.  Warning: lots of penises.

And I've just this morning found - but haven't explored - what looks like an interesting blog: Patagonian Monsters.

Email ThisBlogThis!Share to TwitterShare to FacebookShare to Pinterest
Labels: oddities