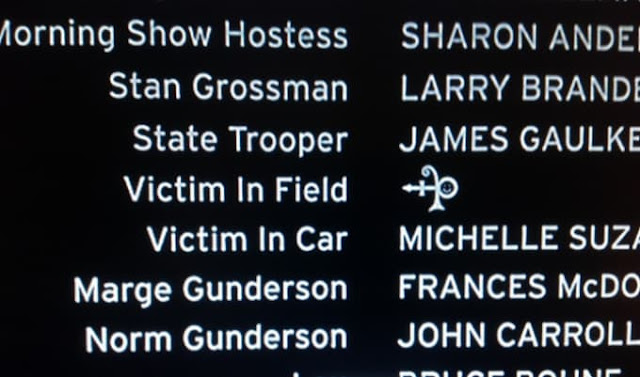 I remember seeing this symbol in the rolling credits at the end of the movie, and like many others I wondered if Prince had been involved in a cameo or as a joke.


For years, it was a source of mystery, with Fargo's cult following not 100% sure if Prince was actually in the film, but The Huffington Post caught up with the film's main villain—Gaear Grimsrud, a.k.a. actor Peter Stormare—and he laid the full story out. As Stormare tells it, Prince and the Coen brothers are actually friends, primarily because they are all from Minnesota. Apparently Prince wanted to have a small role (what would seem to be a dead victim laying in a field) in the film, but was ultimately unable to do it. The symbol was thrown in, with a smile, seemingly to add mystique to the entire Prince/Warner Bros. situation, but the rumor of Prince actually being in the film grew into a wild piece of lore.

And note there is a tiny smiley face inside the symbol.