For the better part of the past decade, however, the Catholic Church has eyed the Girl Scouts of the U.S.A. suspiciously, claiming the organization is too close to groups such as Planned Parenthood that are in conflict with the faith’s views on abortion and the family. The Girl Scouts organization has denied the allegations, but the controversies — largely rooted in misinformation — have prompted dioceses to cut ties with the Scouts.

In the latest instance, the Archdiocese of Kansas City in Kansas is ending its relationship with the Girl Scouts and transitioning its support to a Christian-based scouting group, saying the Girl Scouts’ programs and materials are “reflective of many of the troubling trends in our secular culture,” and that the organization is “no longer a compatible partner in helping us form young women with the virtues and values of the Gospel.”

Kansas City Archbishop Joseph F. Naumann said in a statement Monday the archdiocese’s pastors have been asked to begin phasing out Girl Scouts troops, either quickly or over the next several years. As an alternative, the statement said, they should begin forming troops through American Heritage Girls, which describes itself as a “Christ-centered leadership and character development ministry” and promotes itself as a faith-based alternative to the secular Girl Scouts.

This second item is mostly unrelated, but it does involve a girl who is a Scout. 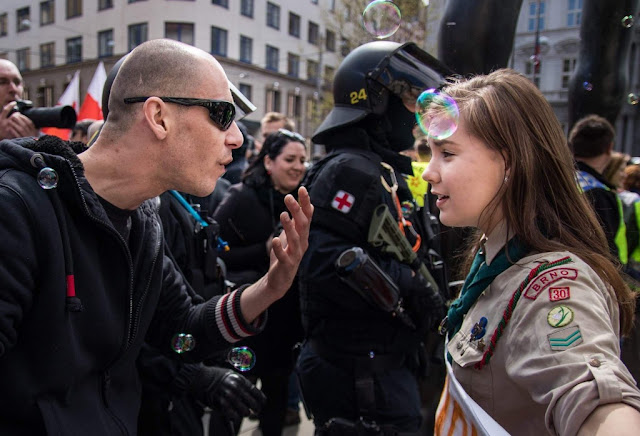 Lucie Myslíková, 16, has become an internet star after a photo of her squaring up to a neo-Nazi at a Czech rally went viral.. “It’s consistent with Scout ideology and history to fight against neo-Nazism,” she said... “We started arguing about migration and refugees. He ended up warning me the refugees will rape me. I told him, I’m not afraid of refugees, because a white or a Czech guy could do the same, it’s not a question of race or nation.”

More at the link, and at the Reddit discussion thread.