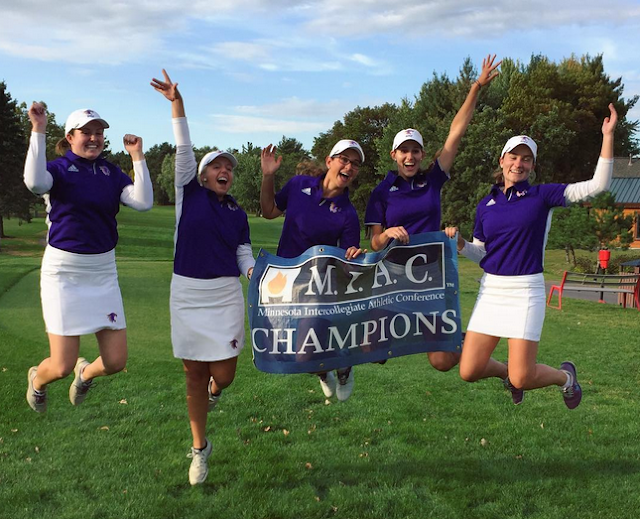 
COON RAPIDS, Minn. -- In just six years, the St. Catherine University women's golf program has gone from its infant stages, all the way to conference champions.

The Wildcats completed their incredible ascension up the Minnesota Intercollegiate Athletic Conference (MIAC) standings by winning the 2016 championship – and the conference's automatic bid to the NCAA Championships – Monday at Bunker Hills Golf Course in Coon Rapids, Minn. St. Kate's held off a furious charge from Carleton, as the Knights jumped from fifth to second on Sunday, and actually took the lead on Monday's back nine, but the Wildcats regained the lead and held on for their historic win. St. Catherine shot a 319 both Saturday and Monday sandwiched around a 311 on Sunday, with a  three-day, 54-hole total of 949 [average of 79/round] to claim the title.

The Wildcats first appeared in the MIAC Championships in 2011, and finished either ninth or 10th over their first three seasons, but the last three – culminating in the 2016 title – has shown rapid improvement. The team ascended to sixth in 2014, leapt to third in 2015 and hoisted their first-ever MIAC title in the sport Monday.

Finally - and arguably even more impressive - I would note that in July, these young ladies were recognized as a top-25 academic team nationally:


The Wildcats were named one of the top academic teams in the NCAA with a cumulative team grade point average (GPA) of 3.699 during the 2015-16 season, the WGCA announced Wednesday afternoon.

St. Kate's was tied for 18th in the WGCA's list of the top-25 team GPA's in women's golf. The list included teams from Divisions I, II, and III as well as programs in the National Association of Intercollegiate Athletics (NAIA).  St. Kate's was tied with Yale University at No. 18 and was the highest ranked team from Minnesota. More impressively, the Wildcats were one of only two Division III teams represented on the list, the other being Mount Holyoke College with the No. 22 team GPA in the country.

Left-to-right in the photo (which I think is way better than the staid official one at the team's website) (this one via Instagram): Sydney Busker, Taylor Krouse, Kaitlyn Alvarez, Madi Roe, and Abby Conzemius.  Not in the photo: Nicole Traxler, Maddie Weinman, and coach Mary Sweeney.

Addendum:  I think it's worth noting that the following year, five members of this team received Women's Golf Coaches Association (WGCA) All-American Scholar awards. "The criteria for selection to the All-American Scholar Team are some of the most stringent in all of college athletics. The minimum cumulative GPA is 3.50."  It was senior Kaitlyn Alvarez' fourth such honor, and the third for juinior Sydney Busker.