From the "Tuition and Financial Aid" page for Sidwell Friends school in Washington, D.C.:

Addendum:   After I originally posted this (brief) item, several readers have commented with queries about why this matter caught my eye, so I thought I'd elaborate a little more with an addendum.  The topic came up because of a news story about the young Trump's school tuition (the data I pulled for the above was for the school that Obama's children attended).  And the "includes hot lunch" clarification struck me as a curious item to specify - sort of like "buy this Maserati and get a free tank of gas."

But the general topic of the enormous cost of private education has been on my mind intermittently for quite a while.  Several years ago I helped several classmates as we planned our 50th high school reunion (yes, I'm that old...).  Fiftieth reunions are memoryfests for returning students, but for the schools they are major foci for fundraising.  As we prepared our reunion program, I was gobsmacked to see the current tuition, and I took the opportunity to pull some historic data from the school, then graphed it against the Consumer Price Index.  The results were startling: 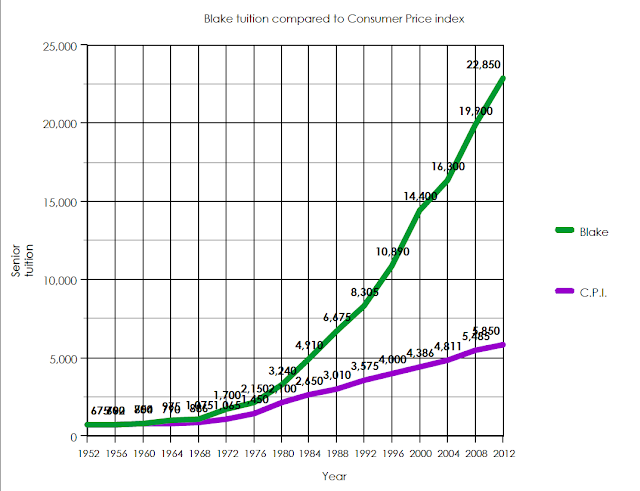 I attended this school in the suburbs of Minneapolis in the 1960s, when the tuition was a bit under $1,000 per year, which was a stress for my parents, but one they considered appropriate and necessary.  When I prepared the graph, the most recent data were from 2012: $22,850 for sixth form (senior year) - a 24-fold increase from my tuition.  A quick Google today shows the 2016 data (one more box to the right) to be $25K for kindergarten and $30,000 for senior year [and I note with some bemusement that the webpage specifies "includes lunch" !!]

The school is of course way different nowadays from the school I knew.  In those days it was a "college preparatory (day)school," with a focus on rigorous academic training.   I think my class of 54 students had probably 12-15 National Merit finalists, and 800 scores on college boards were not unusual. But the only student of color was the foreign exchange student, and there were no girls.

The current crop of students are preparing to enter a world different from the one I grew up in in the 1970s., so I don't expect their curriculum to include three years of Latin.  But what still strikes me is that tuition graph.  Financial assistance is offered in order to attract the proper mix of students.

But I can't understand why the graph departs so exponentially from the consumer price index.