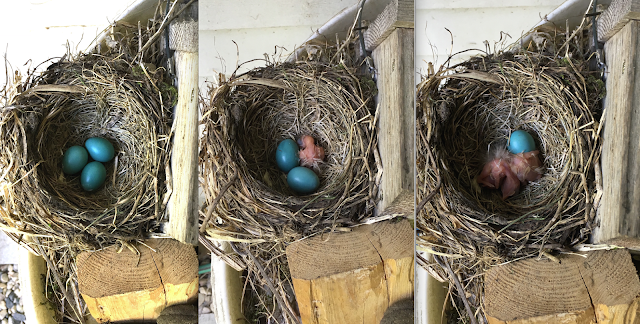 It was a happy day for the American robin who built her nest under our screen porch.  For several years we've had a robin nesting under the deck, but this year another one found an unused rain barrel under the screen porch and constructed her nest (conveniently for us) at waist-high level.

Each time I've gone to the back yard for garden chores, the mother robin has left her nest and flown to a nearby tree to chirp loudly (presumably to distract me from the nest).  This morning she flew away but landed on the grass about 10-12 feet away from me and was very loud, so I looked in and saw the first egg had hatched.  I returned later in the afternoon and found the second chick had emerged.  (I could see the nest from a downstairs window, so I didn't go out and disturb her for a final photo.)

I'll return for another photo after the chicks are fledged.