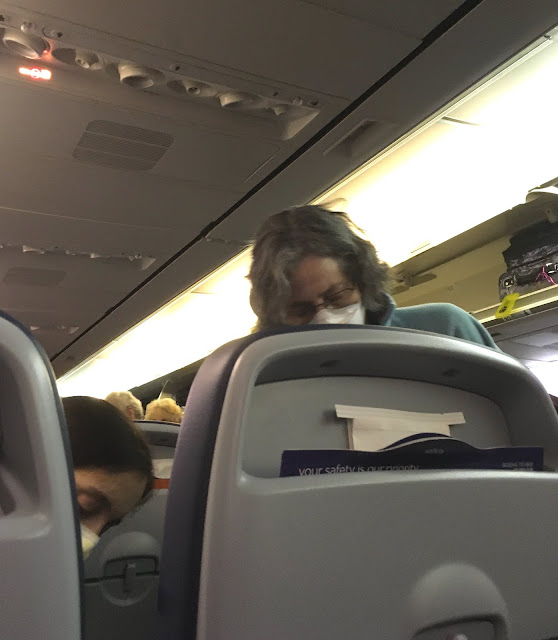 I'm starting this post on my phone while seated in an airplane.  The flight is departing Fort Myers, which is a classic and popular spring break destination, and this is "peak season" here on the Gulf Coast of Florida - but the plane has lots of empty seats.  The mood of the passengers in the boarding area seemed muted and somber rather than festive; while I was out there a girl two seats away from me coughed three times in the space of ten minutes.  I moved to a different part of the boarding area out of what is now called "an abundance of caution."

Seated on the plane, I note with interest a man across the aisle wiping down his tray table before returning it to its upright position.  Then two ladies enter the row ahead of me.  They are wearing high quality masks, with the upper edge tightly pinched to their noses and the bottom well under the chin.  They pull out two packets of wipes and proceed to scrub not only the tray tables and the armrests, but also the fabric of the seatback and seat cushions, and the full back of the seats ahead of them.  One steps into my row to scrub the backs of those seats, apologizing for the smell and explaining that they have children who touch everything.  One sits in the row ahead of me, one in the seat next to me.

I am ending a visit to Florida three days early because of uncertainties about how the coronavirus drama will unfold.  Last Friday I escaped the dreariness of a late-winter Midwest climate to visit my native-Floridian cousins.  A day after arrival in Naples I made a daytrip up to Sanibel to go on a nature hike in the Ding Darling preserve with two old friends from my high-school days.


In an outburst of mutual joy in renewing a friendship after so many years we bumped elbows.

Back in Naples, I monitored the headlines, constrained by the limits of a small phone rather than my heavily bookmarked desktop Mac. CNN gave me thumbnail sketches of the news; the BBC and the Bloomberg business channel provided better insight into the views from Europe and Asia.  Events moved quickly; analysts were unable to predict what will happen to the world economy since there is no precedent for a simultaneous supply-side shock and demand shock. The world has shifted into a risk-off mode with 10-year treasuries briefly trading at an incomprehensible 31 basis points.

My cousins received a message from a daughter in Salt Lake City, where the Mormon church has cancelled all services. Worldwide.  A hospital there has set up negative-pressure tents on the grounds outside the building to house suspected COVID-19 patients. Medical staff are resigned to the likelihood of becoming infected.

Each day after reading these news items, I stepped outside to find the sky blue and the temperature moderate, and I walked for miles on neighborhood streets and the nearby beach.  Everything was quite normal in the natural world.

The human world began to evolve a response that metastasized with a rapidity that the pre-internet world could never have achieved. Museums closed, tourist sites closed their gates. Restaurants were empty. Minor sports events stopped, then major ones. Universities told students to go home, followed by local schools, placing huge burdens on embattled working parents.  I decide to terminate my vacation early, uncertain whether travel restrictions might be put into place.

On my final day I’m in a boat in Morgan Bay in the Ten Thousand Island preserve south of Marco.  We have arrived at low tide for some birdwatching and beachcombing; we range far apart, as explorers of the natural world often do.  Its a reminder that away from urban areas, "social distancing" can be the norm. 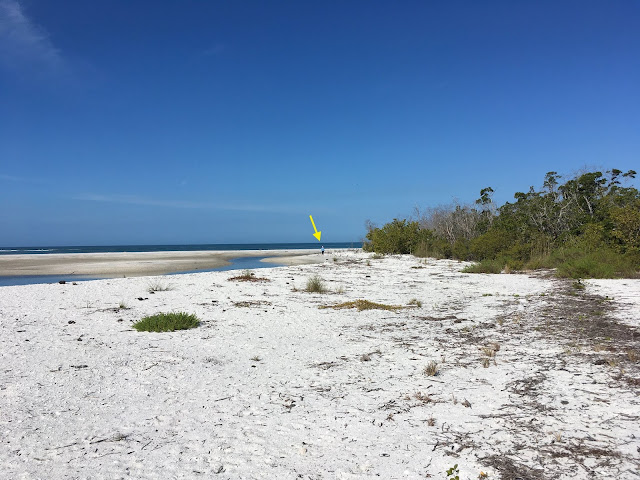 I walk on this island, my shoes accelerating the conversion of shells into sand.  I find a fascinating lightning whelk egg case but toss it back because I don't need to accumulate any more stuff in my life.  Dolphins are cavorting just offshore. Nothing is unusual.  It's a day just like most of the previous ten million.

But now nine hours later I'm seated in this plane watching masked people swabbing everything that doesn't move with alcohol.  So I look up the definition of "surreal" -


An appropriate term.  And today is Friday the 13th...

The view from the window on this night flight is as beautiful as always, with spiderwebs of lights interconnected by ribbons of highways.  Nothing unusual out there.  I walk once up and down the aisle of the airplane.  Most of the tray tables are in their "full upright and locked position" - perhaps because this is a discount "red-eye" flight, but it may be a change in behavior.  Some passengers are holding tablets and laptops on their knees.  Many have their hands folded neatly on their laps, their elbows not touching the armrests.  Normal?  Maybe.  I return to my seat before the flight service begins; while doing so I sense that some passengers are unhappy that I touched the back of their seat while navigating my way down the passageway.  The flight attendants move quickly down the aisle with their cart, with many passengers refusing the offer of refreshment.  Because it's nighttime, or out of "an abundance of caution"?

I feel like I’m living in a movie adaptation of some Stephen King novel or a 28 Days Later sequel. In my life I've read literally dozens of zombie and postapocalyptic stories (and I've always particularly enjoyed the Last Man On Earth ones), but in none of them did the public response first manifest itself with a hoarding of toilet paper.


I rejoice that I am no longer chief of a pulmonary service and an intensive care unit attending physician responsible for deciding who gets those precious beds and who has to be bumped out to a step-down unit on the ward. And I now appreciate that in those days if my hospital faced a shortage of ventilators, all that needed to be done was to place a call to a vendor or borrow one from a nearby facility. I don’t envy whoever has those triage responsibilities now.  And I think of all my favorite trainees - the pulmonary fellows and the respiratory therapy students - who are likely out there on the front lines now.

My seatmate asks me if I have ever seen anything like this. I tell her I was an unwilling participant in the big polio epidemic of 1952 and that I escaped with only an ambulatory impairment while other children in the Sister Kenney institute wound up on iron lungs.  But I was a child, way too young to share the more apocalyptic horror my father must have felt to see his wife and both of his children afflicted and hospitalized with a disease for which there was no cure and not yet a vaccine.


Now I'm back at my desk, cleaning up these trip notes.  I visited my local Target this morning - not to "stock up" on anything, just for regular grocery needs.  The store was not crowded; signs were posted limiting the hoardable items to two per customer.  I gathered my cheese and raspberries and naan bread and other staples and returned home.  Now I need to attend to paperwork, laundry, house chores, etc and generally recombobulate for a couple days.  Then regular blogging will resume.

In the meantime, I invite readers to share their experiences in the Comment section below.  No politics please.