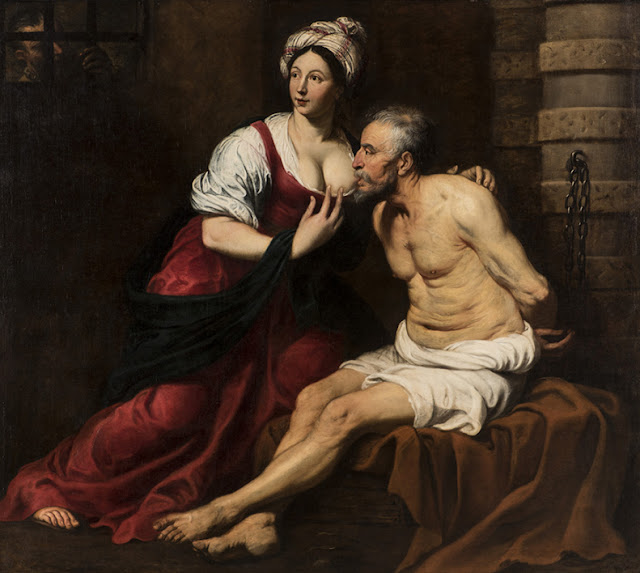 Roman Charity (Latin Caritas romana; Italian Carità Romana) is the exemplary story of a woman, Pero, who secretly breastfeeds her father, Cimon, after he is incarcerated and sentenced to death by starvation.

The story is recorded in Factorum ac dictorum memorabilium (Nine Books of Memorable Acts and Sayings of the Ancient Romans) by the ancient Roman historian Valerius Maximus, and was presented as a great act of pietas (i.e., filial piety) and Roman honour. A painting in the Temple of Pietas depicted the scene. Among Romans, the theme had mythological echoes in Juno's breastfeeding of the adult Hercules, an Etruscan myth.

The story of Cimon is predated, however, by an almost identical story recorded by Roman historian Valerius Maximus, later retold by Pliny the Elder (AD 23–79), of a jailed plebeian woman who was nursed by her daughter. Historians note that Renaissance and Baroque depictions have more incestuous overtones.

In the seventeenth and eighteenth centuries, many European artists depicted the scene. Peter Paul Rubens is known to have painted several versions. Baroque artist Caravaggio also featured the scene in his work from 1606, The Seven Works of Mercy.

The painting depicted at the top is by Pieter van Mol (c 1640), via Wikipedia, where there is a gallery of 16 depictions of Roman charity, including the one by Peter Paul Rubens (1612), below: 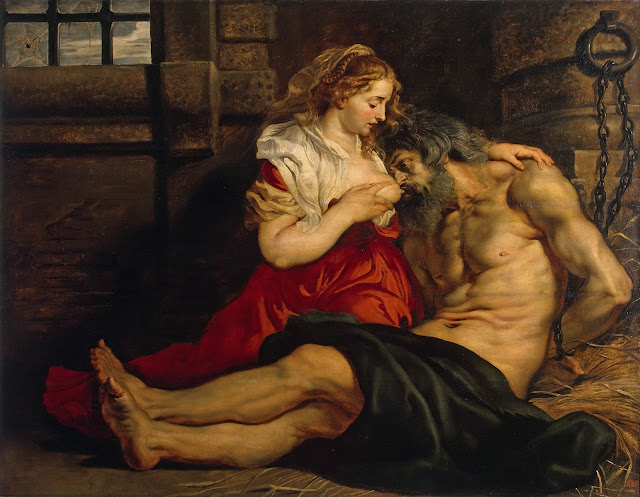