I have featured Hans Rosling on a number of previous posts at TYWKIWDBI because I truly admire his style of presentation.  The best hours of my academic life were spent behind or beside the podium in front of an classroom full of students, so I'm supersensitive to the nuances of lecturing.  This guy has all the skills.  He is recognized as a wizard at portraying otherwise-dry statistics in comprehensible visual forms (see his superb TED talk on the developing world).  In addition his stage presence is captivating, and his use of English (as a second language) is excellent.

I'm not blogging today, but I wanted to put this up for you.  I know everyone's life these days is one continuous TL;DR, but take my word for it, if you are interested in the world beyond your doorstep, this video is worth 15 minutes of your time.  Or at least the first five, and then see if you can stop.

Reposted from 2015 to cleanse my mind.  A lifelong (60+ year) best friend emailed me a link to a Mark Steyn video, identifying it as "the biggest story of the year."  The video began by deploring the childlessness of European leaders (and Europeans in general), then devolved into frank Islamophobia and a broader xenophobia.  This was done by presenting demographic data and concluding from those data that the Europeans who "built the modern world" will "be extinguished" by an overwhelming tide of brown-skinned invaders.

I needed the intellectual equivalent of the "eye bleach" recommended for "unseeing" internet images, and then I remembered this old post featuring one of Hans Rosling's presentations.  He presents data that is probably equivalent to that which Mark Steyn employs, but does so with the perspective of a man of the Enlightenment, not a fearmonger.

Totally worth viewing if you've not seen it.  And worth reviewing every now and then. 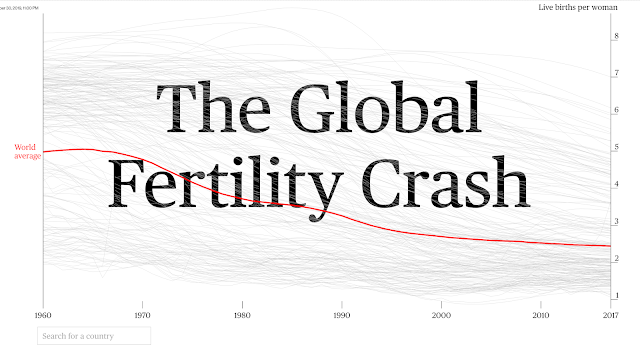 - from a Bloomberg article about the world's falling birthrates. The image at the link is interactive, so you can mouse over those grey lines to see which country is which.  Some interesting results...


While the global average fertility rate was still above the rate of replacement—technically 2.1 children per woman—in 2017, about half of all countries had already fallen below it, up from 1 in 20 just half a century ago. For places such as the U.S. and parts of Western Europe, which historically are attractive to migrants, loosening immigration policies could make up for low birthrates. In other places, more drastic policy interventions may be called for. Most of the available options place a high burden on women, who’ll be relied upon not only to bear children but also to help fill widening gaps in the workforce...


Productivity gains can make up some of the gaps as populations taper off and begin to shrink, but it's a much more challenging way to grow an economy and may not be sustainable over time: For most of the countries in the OECD’s study, the relative contribution of productivity to growth has fallen over time.

Ultimately, no country will be left untouched by demographic decline. Governments will have to think creatively about ways to manage population, whether through state-sponsored benefits or family-planning edicts or discrimination protections, or else find their own path to sustainable economic growth with ever fewer native-born workers, consumers, and entrepreneurs.

Some other interesting graphics and discussion at the link.  I note in passing that the Bloomberg author shares the common belief among businesspeople that "economic growth" is a sine qua non for progress.