"Flight Behavior" and "The Poisonwood Bible" 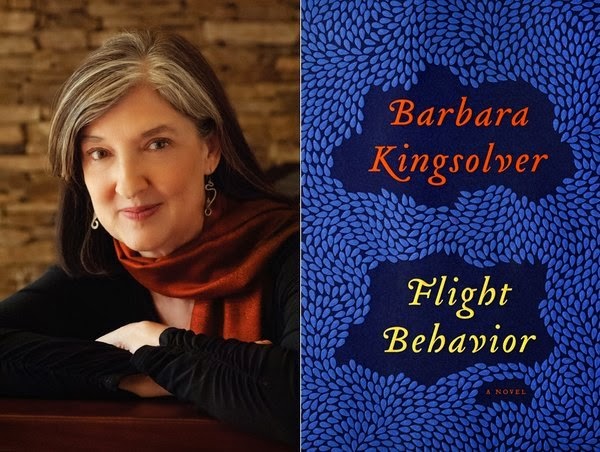 This was my first encounter with the work of award-winning author Barbara Kingsolver ("Her 1998 bestseller, The Poisonwood Bible, won the National Book Prize of South Africa, and was shortlisted for both the Pulitzer Prize and PEN/Faulkner Award.)  I was directed to this particular book by a reader who (correctly) thought the discussion of Monarch butterflies so central to the book would be of interest to me.

The title refers both to the migratory behavior of the Monarchs and (I presume) to the geographically-shorter but equally complex "flight" of the female protagonist from an increasingly restrictive lifestyle in the mountains of southern Appalachia.  I found the latter aspect of the book more compelling than the commentary on climate change (which for me would amount to "preaching to the converted").   I spent 20+ years living in central Kentucky and working with many people whose lifestyle and worldview were not much different from that of Dellarobia Turnbow, the protagonist of the novel.  Kingsolver's portrayal is "spot on" - not surprising, since she herself was raised in rural Kentucky.

I won't attempt a full review of the novel.  The discussion of Monarch behavior and physiology is comprehensive and well-informed, and will provide some additional insights even to committed butterfly enthusiasts.  This detail was new to me: 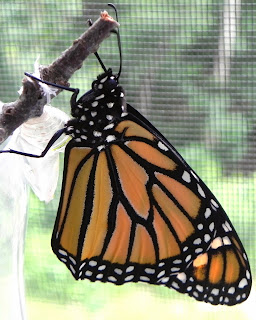 "Hester called the butterflies "King Billies."  She seemed to think each one should be addressed as the king himself.  "There he goes, King Billy," she would say. (p. 74)

I had to look it up, since my Kentucky acquaintances never used the term.


The name Monarch is probably related to the eponymous appellation "King Billy" used by Canadians; the butterfly has the black and orange colors associated with William of Orange, Coregent with Mary after the Glorious Revolution of 1688 and the hero of Protestant England for his victory over the Catholic James II at the Battle of the Boyne.

I enjoy reading works by authors who have enough command of the language to create new turns of phrases or colorful metaphors and similes.  Some examples from this book:


"Her every possession was either unbreakable, or broken."

"The equipment was not necessarily new.  Most of it, in fact, seemed to be older than she was, "pre-Reagan administration," they both remarked dolefully, as if that had been some Appomattox Court House with the scientists on the losing side."

"She'd asked him to tidy things up, but men and barns were like a bucket of forks, tidy was no part of the equation."

"Dellarobia was amazed he could see roadkill from the backseat.  The animal was as flat as a drive-through hamburger."

"She'd seen the man's face.  Straining, neck veins and ligaments bulging.  He looked like a tied-up horse in a barn fire."

And I enjoy encountering new words.  (I haven't looked all these up yet):


"She could certainly bring over some more from Hester's, as they'd canned about fifty quarts.  How could a person never have heard of dilly beans?" [explained in a comment]

"It had no shoulder harnesses in the backseat, only lap belts, so the kids' car seats fit in a sigoggling way that was probably unsafe."

"niddy-noddy" and "Moorit" (a black sheep)

Author/cover image at top from Sustainable Kentucky, where the book is also reviewed.  The side embed is of a Monarch raised at our home last summer.

Reposted from 2013 (?has it really been that long?) to add some thoughts about another book: 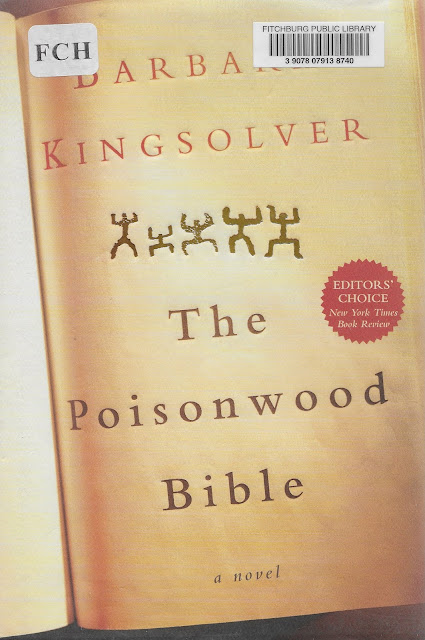 I am about two decades behind the general public in discovering this Pulitzer Prize-finalist novel by Barbara Kingsolver.   It is an interesting and engaging read, about an evangelical minister who takes his family from the American South to the jungles of the Congo.  The narrative is presented in the voices of his wife and each of his three daughters (the death of one of whom will be a driving force in the destinies of the others).

It will probably take the reader an hour or two to learn the voices and viewpoints of the children, who will pass in the course of the book from youth through adolescence to full adulthood.  There are  few conventional "plot" elements; the strength of the book is its examination of the maturation and evolution of the character of the narrators.  Even the overwhelming attack by army ants is important not for the physical trauma, but for the degree to which it forces instant decisions about familial interpersonal relationships.  [Inset photo shows the blue mouth of the Congolese green mamba, described with emphasis in the book].

All members of the family experience cultural shock after their sudden displacement from America to a Congolese village; their adaptations (and maladaptations) are dramatic and distinctly different one from another.  Interestingly several of them also experience "reverse cultural shock" on their return to the United States where there are "no smells" - even in a grocery store.

The final aspect of the book worthy of note is that Kingsolver uses this novel for an incisive critique of American and European colonization and exploitation of Africa, including the rape of the natural mineral resources, the corruption of local governments, and the overthrow and eventual assassination of Democratically-elected officials like Patrice Lumumba and the later similar perfidy in Angola.

In my commentary on Flight Behavior I commended Barbara Kingsolver for her facility with language.  I particularly enjoyed this turn of phrase:  "Thérèse leans close and looks up at me, her eyebrows tilting like the accents above her name."  I enjoyed the humor in the voice of the insufferable Rachel ("He calls me Princess, which really is maybe too much polish for the jalopy"), and especially her neverending malapropisms ("the forest prime evil", "I was feeling at loose odds and ends", "You have your way of thinking and [Africa] has its, and never the train ye shall meet", "I won't tell her [who I am].  I prefer to remain anomalous", "[the children] clamber around me until I feel like Gulliver among the Lepidopterans.")

In this book I encountered only two new words:  Sigoggling (again).  Looked it up this time - an Appalachian term for "out of balance/crooked/not built properly" - with an interesting etymology: "Apparently from side + goggling, from goggle (“to stare at with wide eyes”), indicating that something had to be stared at sideways to appear straight."  And calabash - a bottle-shaped gourd, or the tree on which it grows, or a container of that shape, or a musical instrument made from the gourd.  And of course I'm old enough to remember "Goodnight Mrs. Calabash, wherever you are."

Photo of mamba's blue mouth via.