A visual reminder that billions are not at all like millions 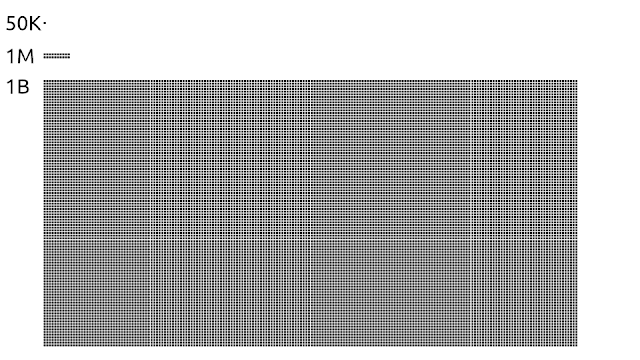 For a variety of reasons, discussions of wealth, taxes, and inequality often involve comments about the ultra-wealthy, and sometimes "millionaires and billionaires" are conflated as a group.  The image above is a reminder that a billion (of anything - not just $) is not like a million.  It's not even a log-power larger.  In present-day usage it is a thousand millions (3 log powers) (in old British parlance a billion was a million million).

This isn't the post for arguing whether billionaires are inherently wicked or guilty of something and/or how they should be treated.  This is just a reminder about size differences.  The same perspective needs to be applied when referring to deep time (billions of years is vastly different from merely millions of years) and deep space (billions/millions of miles).

Discussed at the dataisbeautiful subreddit, where in addition to the usual analogies ("one million seconds is around 11 days, one billion seconds is over 31 years") is this even more dramatic one:  "How much larger is a billion than a million? The difference is about a billion."

Email ThisBlogThis!Share to TwitterShare to FacebookShare to Pinterest
Labels: mathematics