... [there are] Facebook groups with names such as “Not Putting on a Shirt” and “Flat and Fabulous” that included many hundreds of women’s happy stories — and photos — about their choice to have an “aesthetic flat closure,’’ the term used by the National Cancer Institute starting in 2020, and forgo breast reconstruction. 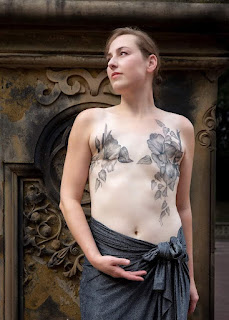 So Attai did her own survey of close to 1,000 women who’d had a single or double mastectomy without reconstruction. Published last year in Annals of Surgical Oncology, it found that close to three-quarters of the women said they were satisfied with the outcome...
While many women still opt for breast reconstruction, as the numbers from the American Society of Plastic Surgeons make clear, Champagne and others engaged with the issue of flat closure tick off a list of reasons, including increased awareness of the option, for what cancer doctors and surgeons say is a growing interest in going flat...
“A breast cancer diagnosis can be particularly overwhelming because there are so many decisions to be made in a short period of time including choices of doctors, a treatment plan and the woman’s post-mastectomy chest,” says Attai, in an email. There’s more awareness now that the process of reconstruction has risks. “Women who opt for reconstruction, whether a breast implant or their own tissue (called autologous reconstruction) could face multiple surgeries, post-surgery recovery, a 10 percent risk of infection which can get in the way of a chemotherapy or radiation schedule, and, occasionally, implant recalls and removals.”
For women who want to do reconstruction, Attai says, they often feel the effort and risk is worth it. “But for others, it isn’t.”