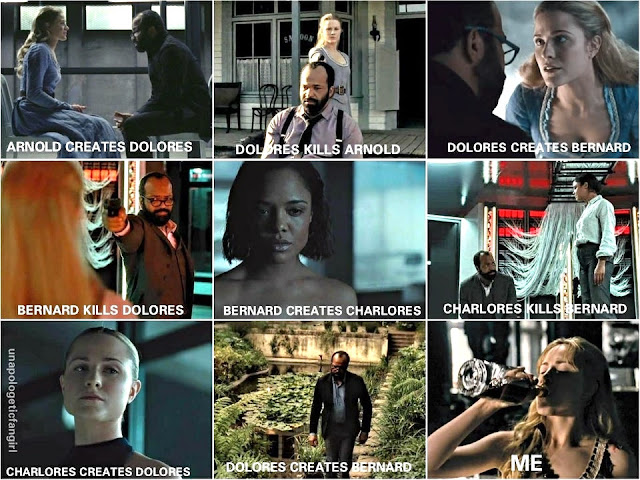 I thought about each panel in sequence, then laughed when I finally got to the final one, because I totally enjoyed the Westworld TV series, but before it was over I too was resorting to some recreational beverages.

Some discussion at the via.
Reposted from 2018 to add the official trailer for the upcoming Season 4:
I'm willing to give the series another chance.
Addendum:  Found this "recap" of the first three seasons -
I'm still confused.  But it's such a visual treat.  And I am entranced by the implied storyline:  the robots love the world, humans are screwing up the world, so what should the robots do about that...?
Addendum: A harshly negative pan of the upcoming season 4:

The once mysterious show-as-a-puzzlebox has, four seasons in, become nothing but an endless MacGuffin hunt. How maddening for its seven remaining fans... There’s only so much I can tell you about where we are at the start of season four, but, as is typical for Westworld, they are truly making it up as they go along... Nobody in Westworld seems to be capable of answering a direct question without reciting a riddle. It is maddening... Normally when I hate something, I hate it with no remorse. But with Westworld, I genuinely feel sorry for the few remaining viewers who are invested in this story. You are not going to get a satisfying conclusion to all of this. What an amazing first episode that once was. What an absolute mess it is now.