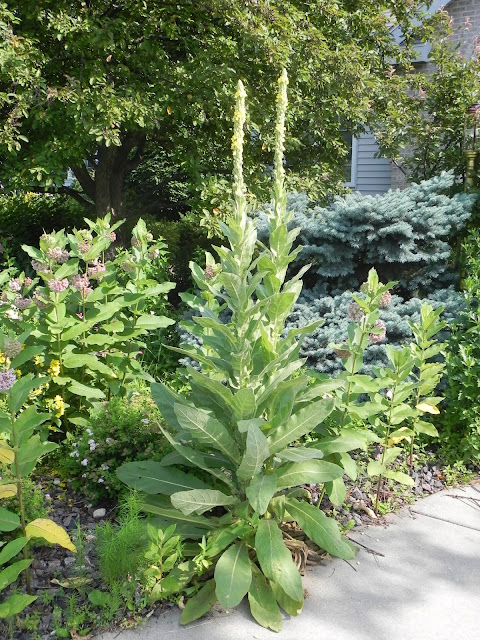 We occasionally find mullein (Verbascum sp.) growing next to our driveway, mixed i with the milkweed and shrubbery.  It's not something we plant, so is technically a weed, but we tolerate it because it can grow to such magnificent proportions.  The photo above is from 2013.
This year mullein appeared in the same general area, but met a sad fate.  The central "spear" was persistently attacked and eaten, not by the rabbits, but by some insect. 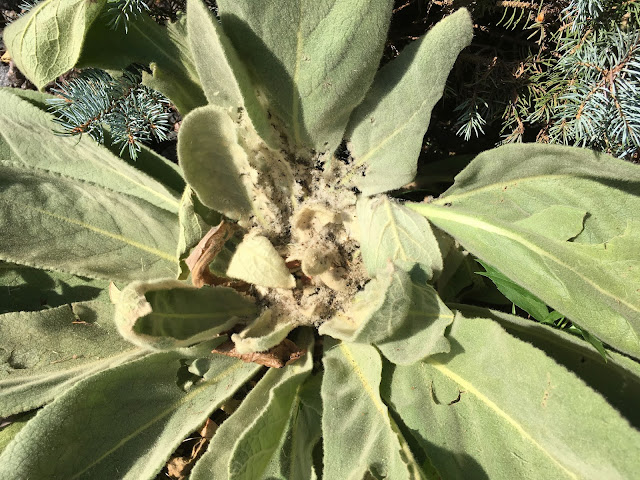 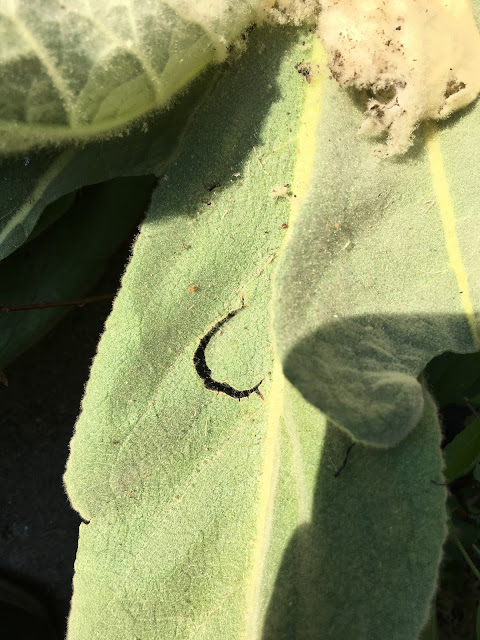 -  but never found a caterpillar under the leaves (it might feed only at night).   I let the process go on its own for most of the summer, then this past week decided to dig into the central mass. 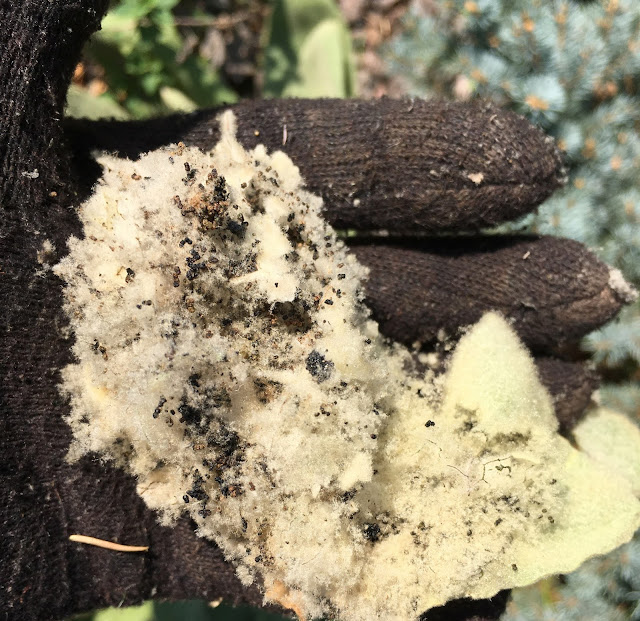 What I retrieved is a generally formless mass of plant fibers liberally admixed with frass.  I didn't want to remove all of it, but I did finally dissect the "mass of frass" to find this little fellow - 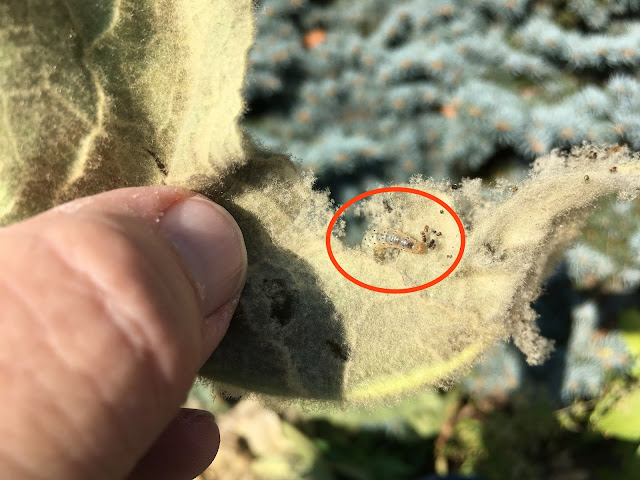 - a semitranslucent larva that doesn't resemble any butterfly caterpillar I'm aware of.  It could be a moth larva, but the overall appearance frankly looks a bit more like a beetle larva than a lepidoptera species - 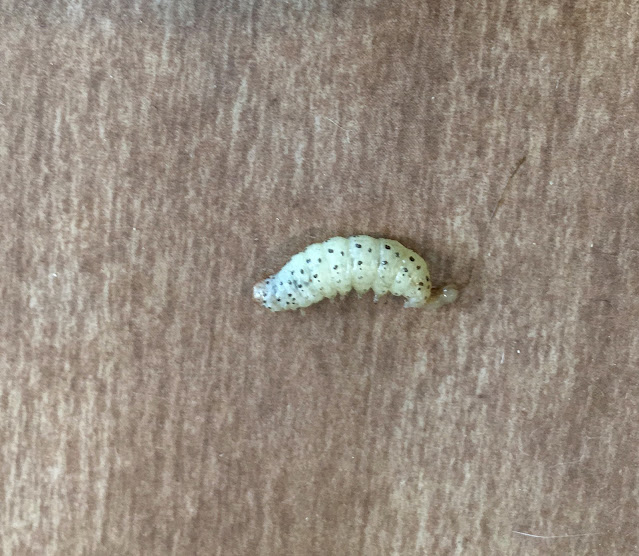 It looks not unlike the "grubs" that my mom and I used to dig out of rotting stumps in the woods up at Leech Lake to use for fishing bait back in the 1960s. (the color a bit inaccurate in my available-light photo; it was more yellowish in real life).
I have no idea what it is.  It currently is residing in a container with some of that chewed mass plus some fresh leaves in a closed container on our screen porch.  Given the season I would expect it to pupate in anticipation of winter.
A brief internet search didn't yield an answer for me.  Googling mullein + caterpillar results in numerous hits for a "mullein moth" that is native to Europe.  A 1904 article "What ate the mullein?" in Elementary School Teacher didn't offer a definitive answer.
I'd be delighted to hear any suggestions.  Is this important?  Not at all.  Just that curious minds want to know.
Addendum:  SOLVED by reader Kniffler, who found the moth Paracorsia repandalis at the Maryland Biodiversity Project, where these photos were posted: 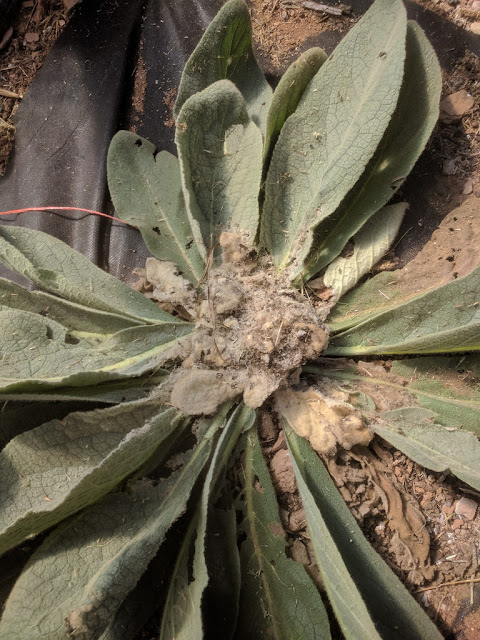 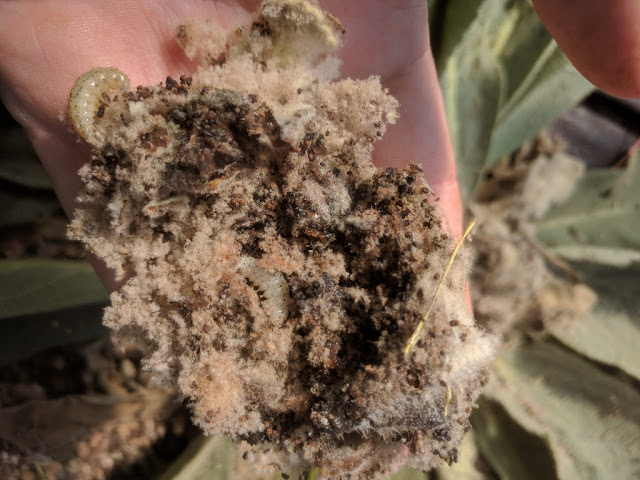 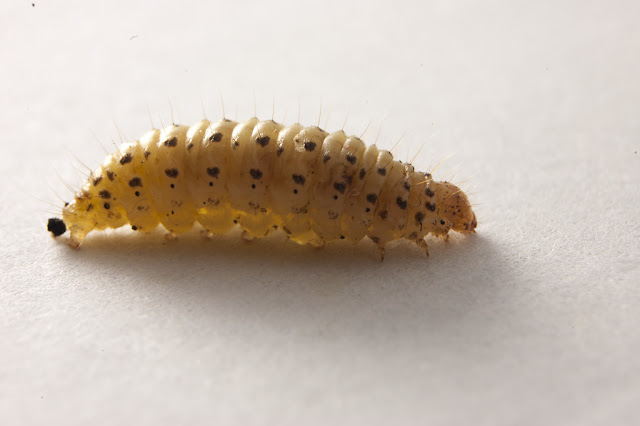 Credit for all photos to Peter Coffey.  Apparently what I referred to as a "formless mass of plant fibers" was actually composed of trichomes from the leaves (admixed with an abundance of frass).
I'll check in a few days and see if I can find the pupa.
Addendum:  Here's a good article about mullein found by reader Crowboy.
And also I'm wondering if the "cotton" in the bee nest I found in a window back in 2019 was comprised of these trichomes from mullein.  Looks very similar.