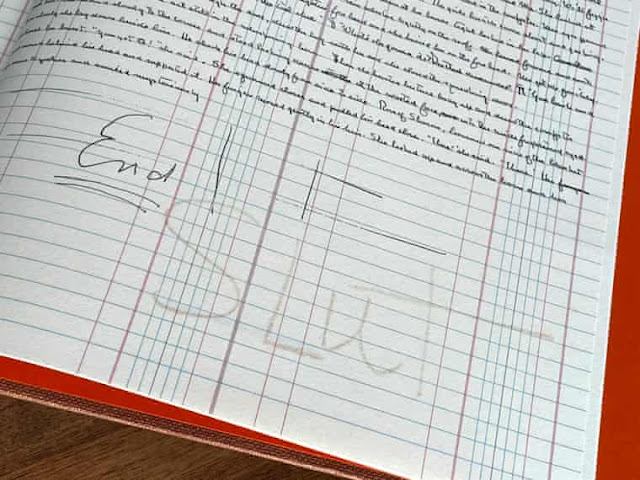 As reported in The Guardian:

The word “slut” scrawled at the end of the manuscript for John Steinbeck’s seminal novel The Grapes of Wrath may have been explained, thanks to a handful of Swedish academics.
The Grapes of Wrath was written by Steinbeck in a frenzy of creativity in under 100 days, between May and October 1938. Independent press SP Books released the first ever facsimile of the handwritten manuscript last week, showing Steinbeck’s increasingly tiny handwriting, his swear words, which were excised from the final novel – and a faint “slut”, written in red, at its conclusion.
Welcoming the manuscript’s release last week, Steinbeck expert Susan Shillinglaw described the word “slut” as “an archival mystery”, pondering whether Steinbeck’s wife Carol might have “playfully” written it in red and then erased it, or if someone in the University of Virginia archives had defaced the manuscript. “I suspect the latter, but we’ll never know for sure,” she told the Guardian last week.
But after the Guardian article about the facsimile was published, a handful of Swedish scholars got in touch with Shillinglaw, pointing out the meaning of “slut” in Swedish.
“It is the Swedish expression for ‘the end’, used on the last page of all kinds of books, especially children’s books,” wrote Jonathan Shaheen, an academic at Stockholm University, to Shillinglaw. “A well placed ‘slut’ always makes me laugh.

“When the matter was brought to my attention by the University of Virginia archivist, I had no idea when the word was added to the manuscript. I thought perhaps someone was objecting to the final scene, and that the word referred to Rose of Sharon’s actions, offering her breast to a dying man,” she said. “I consulted with Steinbeck scholar Bob DeMott. He had no idea about what the light ‘slut’ at the end meant or who might have written it – a visitor to special collections, perhaps? But when I wrote Bob this week, he said, ‘Mystery solved.’ I felt the same way.”