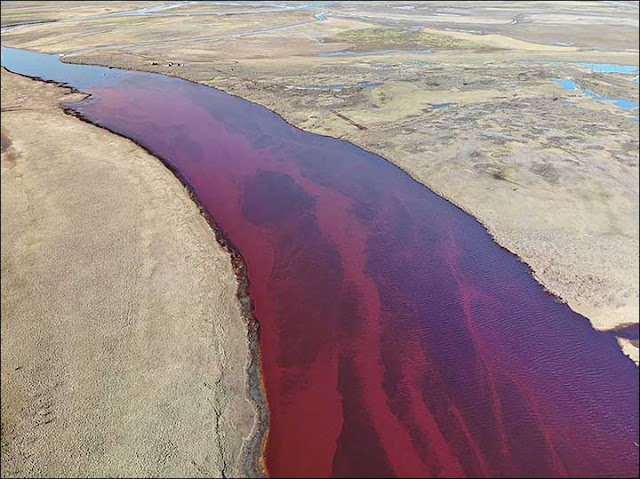 A huge flow of diesel has reached stunning Lake Pyasino in the Arctic after the recent accident at a thermal power plant near Norilsk, it is believed.
This indicates the failure of initial attempts to contain the toxic pollution, and with the lake linked by the Pyasina River to the Kara Sea there are now fears much worse is to come...
On 29 May, diesel leaked into the Ambarnaya and Daldykan rivers from a fuel tank weakened by permafrost thawing at Power Plant No. 3 of Norilsk-Taymyr Energy Company (NTEC), which is part of Norilsk Nickel and provides electricity for the Norilsk industrial district.
Disturbing pictures and footage of the discoloured toxic rivers were revealed by the media. It is now clear that early hopes of stemming the pollution have failed, and the scale of the ecological catastrophe is becoming clearer.
The quantity fuel released mainly into the river system above the Arctic Circle would fit into 350 train wagons. 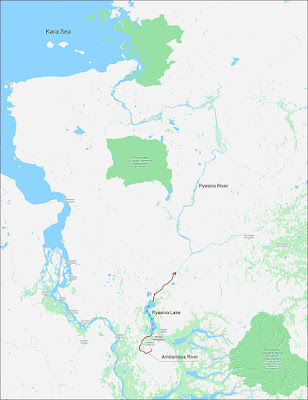 The lake under immediate threat is of glacial origin and is some 20 km from Norilsk. The only river flowing out of it - the Pyasina passes through the Great Arctic State Nature Reserve and flows into the Kara Sea, part of the Arctic Ocean...
Disturbingly, she revealed that on the Ambarnaya, beyond the booms, the concentration varies from 80 to 116 times the maximum limits...
This sounds incredible but it was true: the state’s own local ecological watchdog officials were not permitted to visit the scene of an environmental emergency of huge proportions.
‘They told us we must get permission from the chiefs of Norilsk Fuel and Energy Company, but we did not have much time,’ said Vasily Ryabinin. ‘We asked them: ‘Whose interests are you protecting, guys?’ But they did not allow us to enter. ..
‘The main problem is that the leak was not of oil itself, but of the product of its processing - diesel.  ‘An oil slick is held on the surface of the water, and diesel sinks to the bottom and mixes with water and silt. In addition, the chemical components of diesel fuel are much more toxic.
‘Booms will not be able to completely stop the diesel, part of the oil product will still go beyond and then settle to the bottom. For complete cleaning, it is necessary to completely remove the soil from the bottom of water bodies. So far it is about at least collecting all the spots from the surface.

Addendum:  A tip of the blogging cap to reader Kolo Jezdec, who found this followup report by Greenpeace, which included this ominous map - 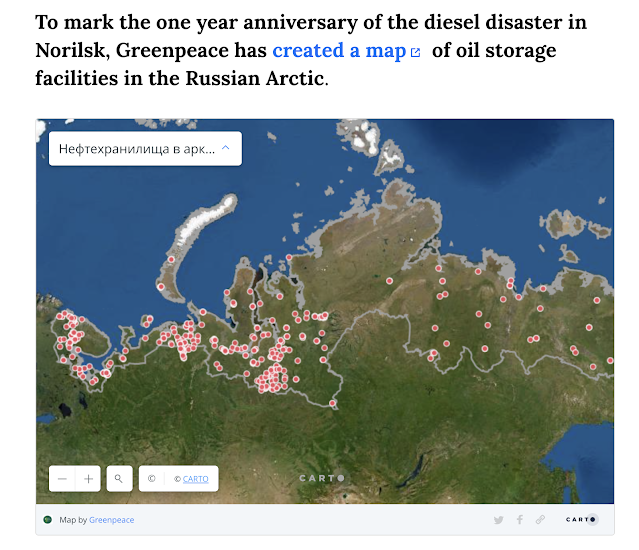