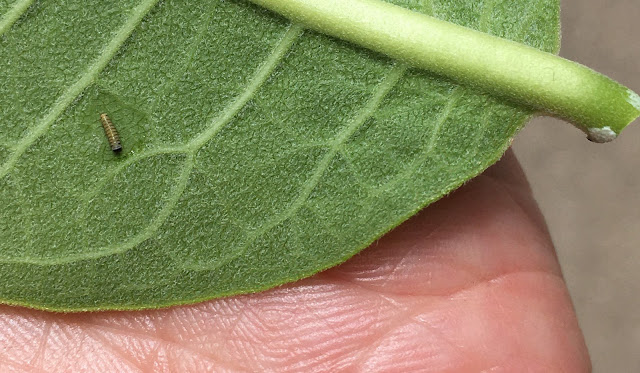 Reposted from 2019 to add the photo above - my best yet at depicting the early feeding pattern of the first instar of a Monarch caterpillar.  Contrary to what I stated below when I started this post in 2011, the first instar does not begin by cutting the hole.  The first step - after eating its eggshell - is to eat the trichomes (the "little hairs" on the undersurface of the leaf).   The above photo, taken a few days ago, captures that moment in time.
With that clarification you can now proceed with the rest of this old post; I'm not planning to re-edit all the old text. 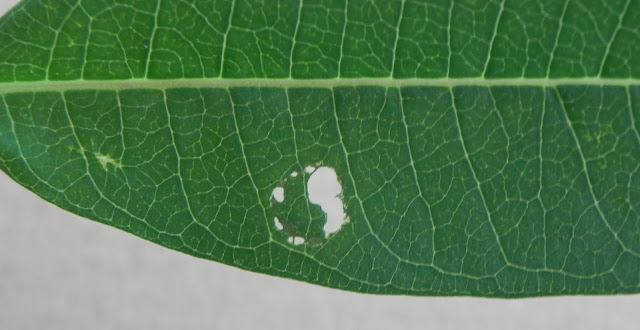 [2011 text] If you're walking past milkweed plants, sometimes you can see a tiny hole in the leaf.  Turn the leaf over, and you may see droplets of the sticky latex sap oozing from the cut area. 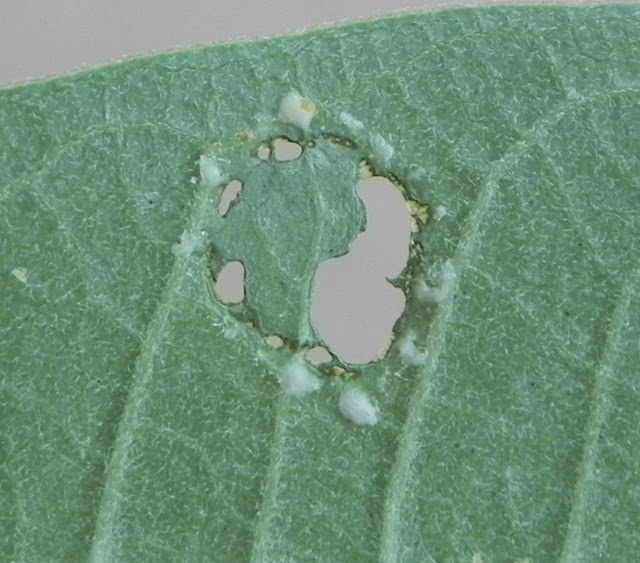 In this case, the perpetrator is not present.  This is the feeding pattern of the first generation (first instar) larva of the Monarch butterfly.  The female Monarch lays her egg (typically one to a plant) by grasping the leaf edge with her feet and stretching her abdomen underneath.  When the larva hatches, it begins eating the leaf by cutting that circle, which breaks the flow of latex to the tissue in the center.  The little instar can then continue eating that part of the leaf without being physically overwhelmed by the flow. 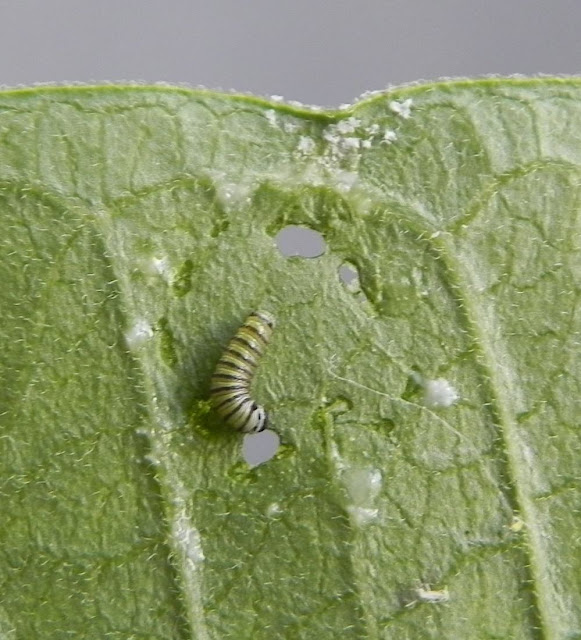 Here's one at work.  First they eat the little hairs inside the circle, then they finish the contents of the circle, then (usually as a larger second instar) head out to work on the leaf edge itself.

When we see leaves like the one at the top, it typically means the caterpillar has fallen victim to a bird or to the ants who patrol the plant tending their aphids.

There's one other caterpillar that has evolved to favor the highly toxic milkweed leaves as a food source - the "milkweed tussock moth." 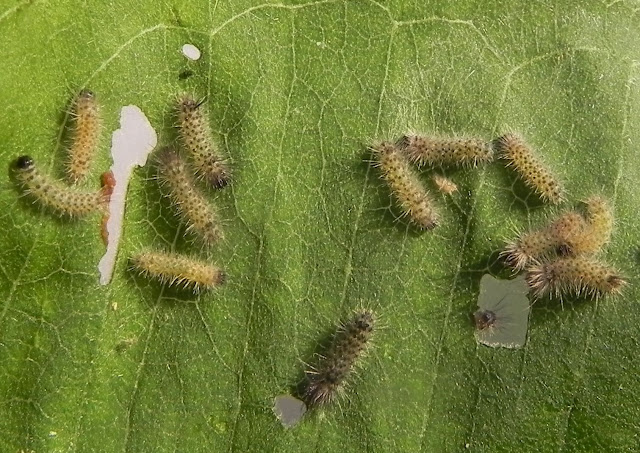 Unlike the monarch cats, these are gregarious creatures, emerging from large clusters of eggs laid by the moth.  They can tolerate the cardiac glycosides in the latex, but also don't want to be overwhelmed by the flow, so while they are little, instead of cutting the vein as the Monarch does, they eat between the veins.  The result looks like this leaf I photographed yesterday - 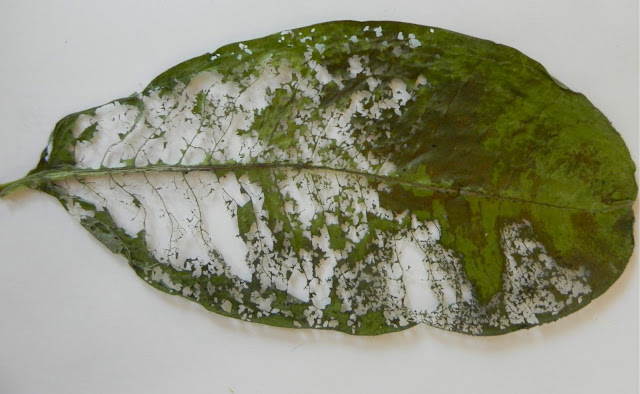 Totally "skeletonized" but with the arborized veins still intact.  In this case they had moved on to a different leaf; as they get larger they are capable of consuming the entire leaf and defoliating the plant.  Milkweeds have large taproots and tolerate the process quite well, especially because these are late-summer caterpillars and the plant is already in blossom or seed.

Addendum July 30:  Here's what leaves look like that have been consumed by the next generation of tussock moth instars.  It's not as delicate.  The generation after this one is capable of stripping a milkweed right down to the stem. 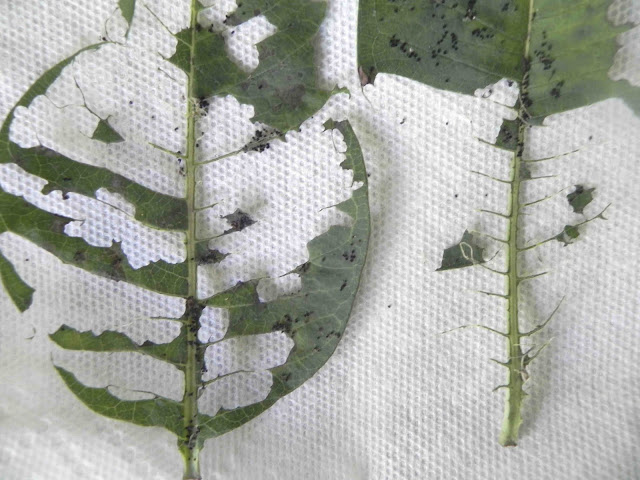 Reposted from 2011 to add this photo and comments: 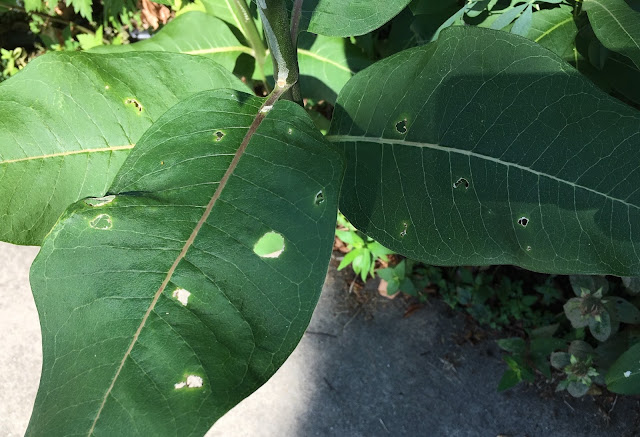 The image above shows why we bring Monarch eggs into the house and screen porch.  The milkweed plant in the photo is next to our driveway.  We have never seen a caterpillar on it.  Each of those holes represents a location where a Monarch deposited an egg, the first instar emerged and began feeding, perhaps molted once... and then disappeared.  At our location that probably represents predation (or accidental dislodgement) by ants.  The survival percentage may be higher in more rural locations, but it is still high; consider that a female Monarch can lay 500 eggs in her lifetime, and sustaining the population requires that 2 survive, then do the math. 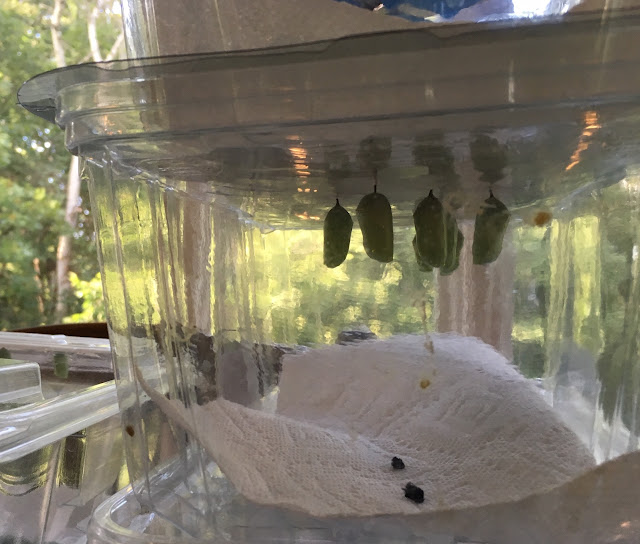 When we find eggs on milkweed leaves, we pluck the leaf and bring it inside away from predators.  The containers require cleaning and changing, but the cats are quite content to pupate there.

This (September) morning we had a couple eclose; we released them from the south side of the house because they have a long trip to get to Mexico before the weather turns cold (though they can travel a hundred miles in a day).