The Battle of Teutoburg Forest 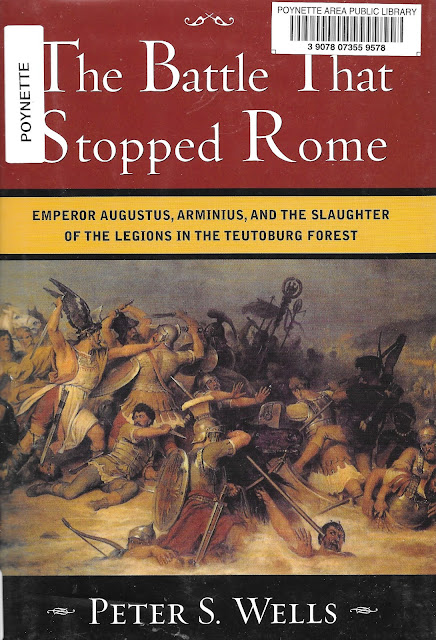 When I was growing up I thought I was receiving an excellent education; it wasn't until adulthood that I realized I had been taught almost nothing about world history outside the United States.  My first inkling that something had happened in Teutoberg Forest came in the 1970s, when PBS ran the I, Claudius series.  I should get out that DVD set and rewatch, but I seem to remember Augustus sending Germanicus off to "Get me back my eagles!" (or "legions", whichever).
The battle occurred in 9 A.D. in central Germany/Germania and resulted in the slaughter of three full legions (15,000 footsoldiers and cavalry) by a coalition of "barbarians."  The battle can be viewed as a pivotal point in the history of the world, because it effectively halted Roman expansion into Europe.  As decisive as it was at the time, the battle was effectively forgotten for a milennium (in part because the victors' transmission of history was oral rather than written) and the battle was not rediscovered until the writings of Tacitus and other Romans were translated and published widely; at that point the battle served to help Germany establish an identity and a pride in their cultural history.
The book is an easy read that can be finished in perhaps 4-5 hours.  There are chapters about Augustus, the field commander Varus, the German leader Arminius (later mistranslated by Martin Luther as "Herman"), the tactics of both sides and the presumed sequence of events.   The book repeats itself with regard to various details, suggesting to me that it is perhaps an amalgamation of various essays and reports the author had previously published, and it is a bit light on the archaeological documentation of the battle, but overall I'm pleased to recommend it.
For a quick but detailed preview, the Wikipedia entry is outstanding.