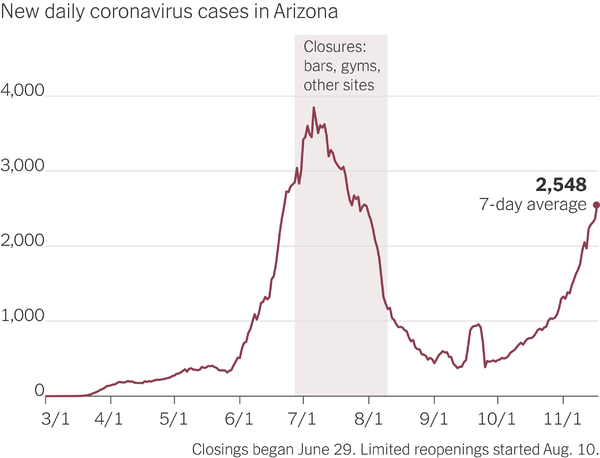 Mask-wearing makes a big difference. So does limiting indoor gatherings. In particular, closing indoor restaurants, bars and gyms has reduced the virus’s spread in many places.

Arizona is an excellent example. Its governor, Doug Ducey, a Republican, resisted taking aggressive action for weeks. But in late June, he closed bars, movie theaters and gyms and banned gatherings of 50 people or more. The rules began to lift in August.
Look at what happened to the virus in Arizona while the restrictions were in place — and what happened afterward (chart above).

Since Gov. Ron DeSantis reopened Florida in late September, the number of reported Covid-19 cases per week in the state has tripled.
On September 25, DeSantis signed an executive order reopening the state, freeing restaurants and bars to operate at 100% capacity. In the week leading up to the order, Florida reported more than 17,000 new cases.
In the past 7 days, the state has reported more than 53,000 -- meaning three times more Floridians have tested positive in the past week than in the week before the reopening.