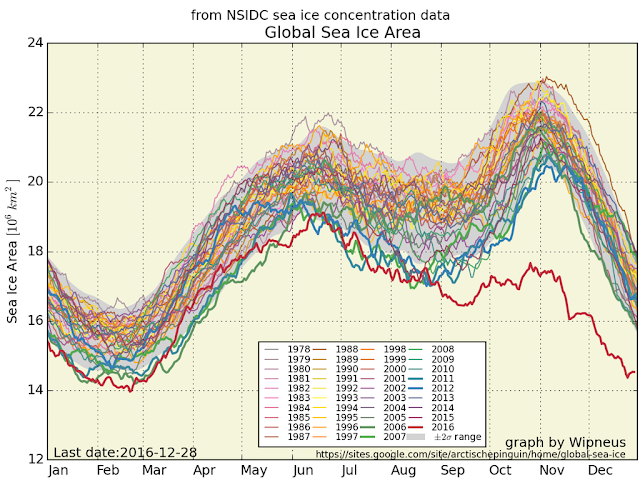 You don't need a p value to see that 2016 is a striking outlier.

Note this is a graph of sea ice, not land ice, and that it includes both arctic and antarctic ice, which is why it doesn't have a unimodal curve.  More info at the National Snow and Ice Data Center.

A related story from Wisconsin:


The Wisconsin Department of Natural Resources recently scrubbed language from an agency web page on the Great Lakes that said humans and greenhouse gases are the main cause of climate change.

The DNR now says the subject is a matter of scientific debate.

The department made the changes on Dec. 21, striking out whole sentences attributing global warming to human activities and rising levels of carbon dioxide.

It’s the most recent example of the DNR removing information related to climate change. More broadly, the changes reflect how the administration of Republican Gov. Scott Walker has de-emphasized the subject since he took office in 2011.

In the latest changes, the DNR says of climate change, “as it has done throughout the centuries, the earth is going through a change. The reasons for this change at this particular time in the earth’s long history are being debated and researched by academic entities outside the Department of Natural Resources.”

Don't blame the staff at the Department of Natural Resources.  This change in language was mandated by Governor Scott Walker.