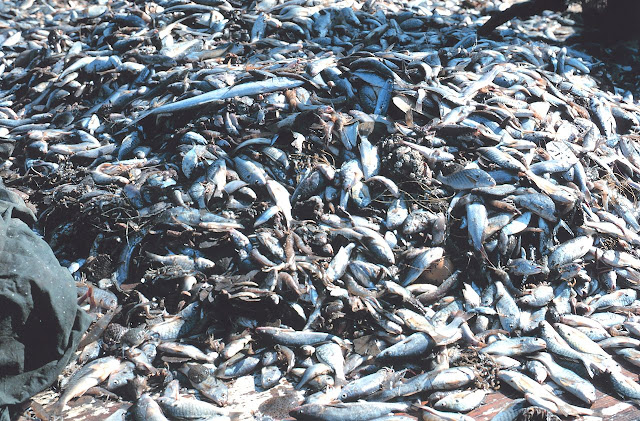 "Bycatch, in the fishing industry, is a fish or other marine species that is caught unintentionally while catching certain target species and target sizes of fish, crabs etc. Bycatch is either of a different species, the wrong sex, or is undersized or juvenile individuals of the target species. The term "bycatch" is also sometimes used for untargeted catch in other forms of animal harvesting or collecting."

More at the link.  Here's an example, described by Bill Bryson in The Road to Little Dribbling:


"... in his book, [Callum] Roberts gives a list of all the aquatic life incidentally killed - the bycatch, as it is known - by a fishing boat in the Pacific Ocean in the process of legally catching just 211 Mahi-mahi. Among the aquatic animals hauled aboard and tossed back dead in a single sweep were:

This was legal under international protocols. The hooks on the longlines were certified "Turtle Friendly."  All this to give 211 people a dinner of Mahi Mahi.

Photo credit for the shrimp bycatch to NOAA's Fisheries Collection.