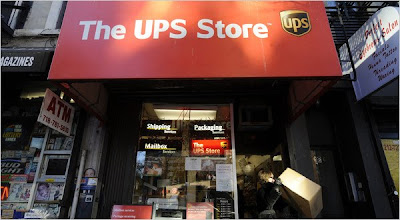 TYWKIWDBI doesn't intend to become a consumer advice blog, but I would like to echo the sentiments of an article at the NYT this week.

Two weeks ago I went to our neighborhood UPS store to mail a package; the friendly clerk asked if I wanted it to go via UPS or USPS and I replied "whichever is cheapest." She quoted a price, I paid, and it wasn't until I was walking out that I decided it seemed to be too high, but I hadn't weighed the package and couldn't offer a protest.

So the last time I decided to use a Priority Mail Flat Rate package. When I was quoted a price WAY over the flat rate, I realized how much of a surcharge they add. I decided that based on the price of gas it was worthwhile to drive the extra 8 miles to the post office.

Here's an excerpt from the NYT article:

Posing as customers, reporters for The New York Times visited several U.P.S. stores last week looking to mail an item by Priority Mail — one of the postal service’s signature offerings. In nearly every instance, they were quoted prices well above the government postal rate, and only one of them was told they were paying a premium for the convenience of using a U.P.S. Store.

One store on the Upper East Side said it would cost $21 to send an eight-pound package by Priority Mail to Old Greenwich, Conn. The clerk suggested using U.P.S. Ground instead for $19.90. At the post office across the street, the same package cost $8.80 to ship. Each arrived in two days...

No rules govern how much a U.P.S. Store can charge for postal services, or mandate that it tell customers that it is adding a surcharge.

The only notice the reporters found was a notation on the receipt that reads “U.S. Postal Rates Are Subject to Surcharge,” though with no indication of what the markup is...

Addendum: I should clarify that my comments and the NYT article apply to "UPS stores" which are franchised by UPS and may vary enormously around the country. By contrast, our family has been absolutely delighted with package delivery to our home by UPS itself, to the extent that we routinely give our local carrier a Christmas present.