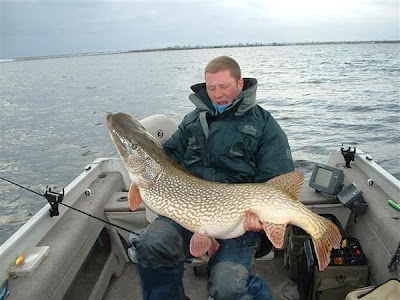 “This pike was caught on the 6th of March 2006 by Dutch fisherman Ewout Blom in a pretty big lake in the south of Holland, I know the name of the lake from where quite a number of 40 plus pikes were caught and released but promised not to mention the name to avoid too heavy fishing pressure.

"This pike had a length of 127 cm and a weight of 19,5 kilo and was caught trolling with a Rapala Super Shad Rap in perch colour and I have about 10 original digital pictures of this fish.

I didn't know until I just read the Wiki entry that the fish is called a "pike" from its resemblance to the pole-weapon pike. You learn something every day.