Drought in the Amazon basin


Last week I posted the photo below of the Amazonian drought. This morning I found a video at Al Jazeera (those who are interested but don't have time to view the video can speedscan the text here). The first minute or so is visually impressive regarding the fecundity of the Amazonian basin, after which the video wanders into commentary on global warming (the drought appears to be a manifestation of El Niño). Which reminds me, there's a nice essay on the subject of climate change in last month's issue of Harper's:

Some see Earth before agrarian humans as an Arcadia against which we can assess the sins of industrial society. The world without us, in this view, would return to its true temperature, its steady state. Growing up as a species, however, means accepting that we are neither blessed by Heaven nor shatterers of the natural order. No such order exists: no true or natural climate, no normal rate of extinction, no ideal ecology. The only thing normal about climate is its propensity to slam back and forth between maxima and minima, between infernal winters and refrigerated summers. In the oscillating dance of the glaciers, species die. Whether they die from meteorites or from billions of human decisions makes no difference. Either way, they leave behind abandoned niches—the ecological spaces organisms inhabit—resulting in evolutionary cascades of new species. Everything alive is matter in one momentary form, soon to take some other momentary form... 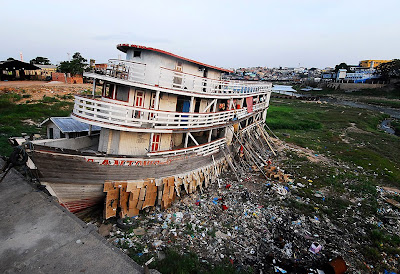 "A riverboat sat on the bottom of a dry tributary of the Amazon River in Manaus, Brazil, Monday. The Amazon Basin is facing a worsening drought. (Marcio Silva/Amazonas Press/Reuters)." Click for bigger.

I'd dry up too if I had to carry all that trash downstream...