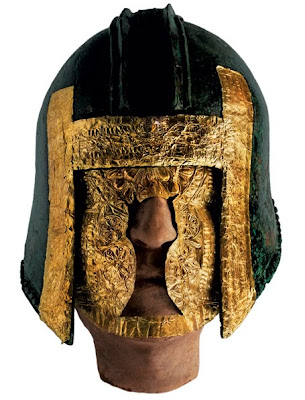 "Excavations in Archontiko have uncovered 450 tombs from the sixth century B.C. Archaeologists Pavlos and Anastasia Chrysostomou, of the Greek Ministry of Culture, describe scores of warriors whose armor, swords, and shoes sparkled with gold and silver..."

Photo: A gold mask and gold-trimmed helmet, seen here on a mannequin, were found in a Macedonian warrior’s grave. Photograph by Gianluca Colla.

I would hope that the one pictured above is ceremonial rather than functional. The nose poking out reminds me of some ?cartoon character, but I can't for the moment remember what or who... Maybe the little alien on some Bugs Bunny cartoons...*

*nope, just checked. That was "Marvin the Martian," and he had prominent visible eyes.