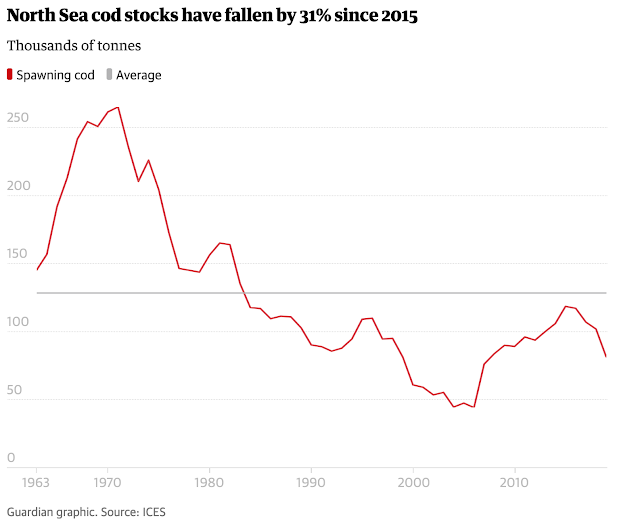 As reported by The Guardian:


... A report published last month by the International Council for the Exploration of the Sea (Ices) revealed that North Sea cod stocks had fallen to critical levels. Warning that cod was being harvested unsustainably, it recommended a 63% cut in the catch – and that’s on top of a 47% reduction last year...

North Sea cod stocks were once plentiful but plummeted – and came perilously close to collapse – between the early 1970s and 2006. A “cod recovery plan” sought to restore stocks to sustainable levels by limiting fishing days, decommissioning boats, banning catches in nursery areas and putting larger holes in nets to allow young cod to escape...

Environmental organisations point out that cod has been fished above its maximum sustainable yield in recent years, meaning the fish are taken from the sea faster than they can reproduce.

The species is not breeding as fast as it used to, too many unwanted “juvenile” fish are caught, and the practice of “discarding” – throwing dead fish back into the sea to keep within quotas – continues despite being banned.

With the end of the cod recovery plan, fishing vessels are now entering sites that have not been trawled for more than a decade, causing damage to the ecosystem, they say.

“This is a fishery that was on the road to recovery, but failures to reduce fishing pressure have led to serious overfishing and a reversal of fortunes for cod,” said Samuel Stone of the Marine Conservation Society.

The story continues at the link with a history of fish and chips.