This skull was extensively trepanned. For scruples. Updated. 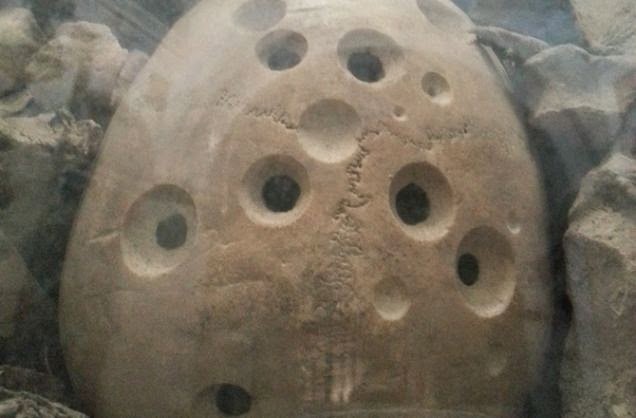 
Researchers at the University of Pisa, Italy, have solved a longstanding mystery around the honeycombed skull of one of the Italian martyrs beheaded by 15th century Ottoman Turk invaders when they refused to give up their Christian faith...

The skull was later drilled, most likely to obtain bone powder to treat diseases such as paralysis, stroke, and epilepsy, which were believed to arise from magical or demonic influences...

"The perfectly cupped shape of the incomplete perforations leads(us) to hypothesize the use of a particular type of trepan, with semi-lunar shaped blade or rounded bit; a tool of this type could not produce bone discs, but only bone powder," Fornaciari said...

This would make the Otranto skull a unique piece of evidence supporting historical accounts on the use of skull bone powder as an ingredient in pharmacological preparations...


Indeed, in his Pharmacopée universelle, a comprehensive work on pharmaceutical composition, French chemist Nicolas Lémery (1645 –1715) detailed how powdered human skull drunk in water was effective to treat "paralysis, stroke, epilepsy and other illness of the brain."

"The dose is from half scruple up to two scruples," Lémery wrote.

"The skull of a person who died of violent and sudden death is better than that of a man who died of a long illness or who had been taken from a cemetery: the former has held almost all of his spirits, which in the latter they have been consumed, either by illness or by the earth," he added.

Scruple: a unit of apothecary weight, with symbol ℈. It is a twenty-fourth part of an ounce, or 20 grains, or approximately 1.3 grams. More generally, any small quantity might be called a scruple.

Note this harvesting of bone powder with a trepan tool is a bit different from trepanning to treat disease in the patient on whom it is done.

Reposted from 2015 to add this photo of a trepanned cow skull: 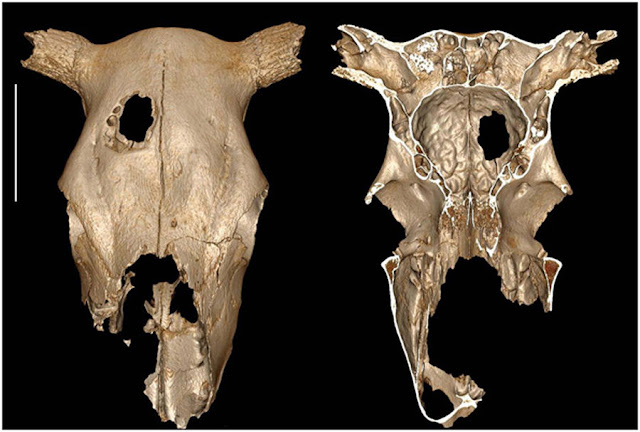 
The earliest cranial surgery (trepanation) has been attested since the Mesolithic period. The meaning of such a practice remains elusive but it is evident that, even in prehistoric times, humans from this period and from the Neolithic period had already achieved a high degree of mastery of surgical techniques practiced on bones. How such mastery was acquired in prehistoric societies remains an open question. The analysis of an almost complete cow cranium found in the Neolithic site of Champ-Durand (France) (3400-3000 BC) presenting a hole in the right frontal bone reveals that this cranium underwent cranial surgery using the same techniques as those used on human crania. If bone surgery on the cow cranium was performed in order to save the animal, Champ-Durant would provide the earliest evidence of veterinary surgical practice. Alternatively, the evidence of surgery on this cranium can also suggest that Neolithic people practiced on domestic animals in order to perfect the technique before applying it to humans.

The full study is published in Nature (via Gizmodo).

Editorial comment:  I do wish that people would stop referring to trepanation as "brain surgery."  It is - as the Nature article authors state - "cranial surgery."

Reposted (again) from 2018 to add new information about obelion trepanation:


Archaeologists were excavating a prehistoric burial site close to the city of Rostov-on-Don in the far south of Russia, near the northern reaches of the Black Sea...

Finding multiple skeletons in the same prehistoric grave is not particularly unusual. But what had been done to their skulls was: the two women, two of the men and the teenage girl had all been trepanned...

They had all been made in almost exactly the same location: a point on the skull called the "obelion". The obelion is on the top of the skull and towards the rear, roughly where a high ponytail might be gathered...

The obelion point is located directly above the superior sagittal sinus, where blood from the brain collects before flowing into the brain's main outgoing veins. Opening the skull in this location would have risked major haemorrhage and death.

This suggests the Copper Age inhabitants of Russia must have had good reason to perform such trepanation procedures. Yet none of the skulls showed any signs of having suffered any injury or illness, before or after the trepanation had been performed.

Now Gresky, Batieva and other archaeologists have teamed up to describe all 12 of the obelion trepanations from Southern Russia. Their study was published in April 2016 in the American Journal of Physical Anthropology.

The story continues at the BBC.