The rites of spring 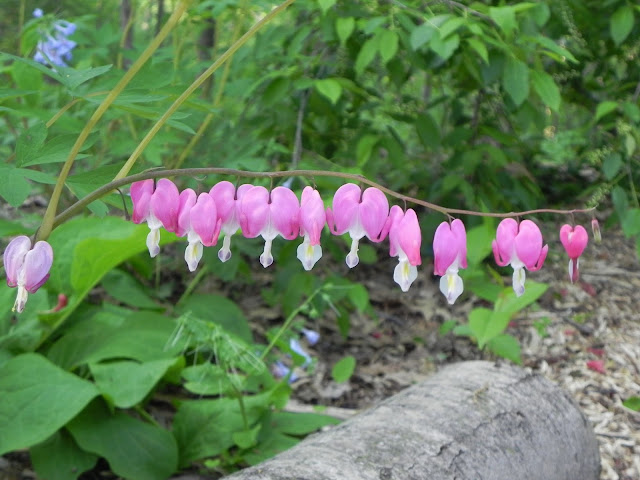 As a partial explanation of my absence from the blog for several days, I'll offer this photoessay showing the outburst of growth in the woods behind our home.  This past winter was unusually prolonged, so when non-Arctic temperatures finally arrived, most people in this part of the country rushed outdoors.  I headed to the woods behind our house.  (The photos should enlarge with a click) 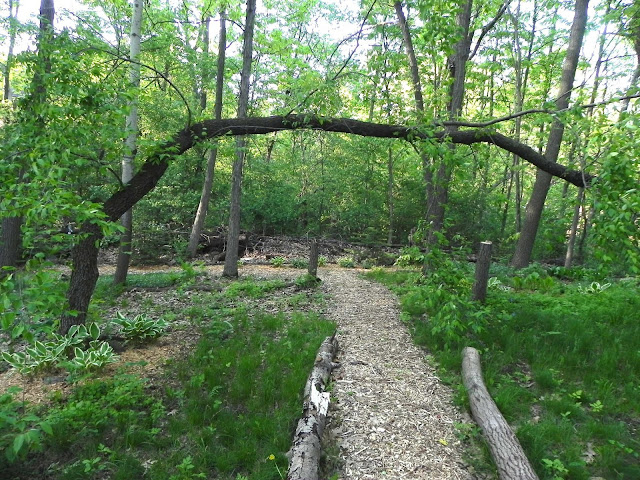 This tree arches over the entry to the woods; this past winter we had several dead and undesirable trees taken out and failed to realize that this tree was leaning on one of those.  When its support was removed it bent to the extent that the top branches now touch the ground.  Not sure if they will collect enough light there for the tree to thrive, but for now it creates a living gateway. 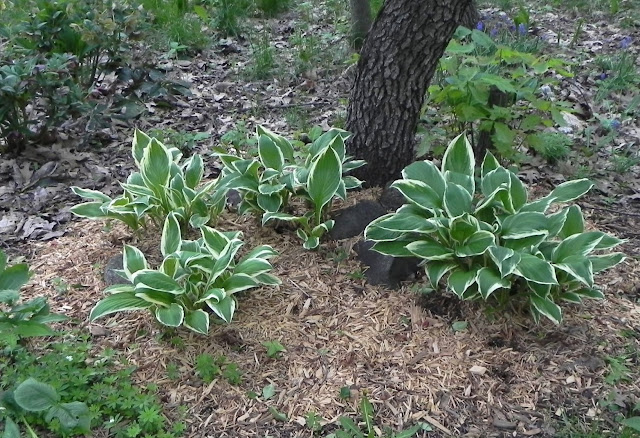 In the Upper Midwest of the U.S., the primary choices for foliage plants in shaded woodlands are hostas.   This cluster at the base of the arching tree was one of the first I planted perhaps 10 years ago.  It will fill out to cover the entire mulched area before midsummer.  All except one of the clusters have had Repellex tablets placed in the root zone in an effort to dissuade rabbits from enjoying lunch here; one plant serves as a control.  We'll see what happens. 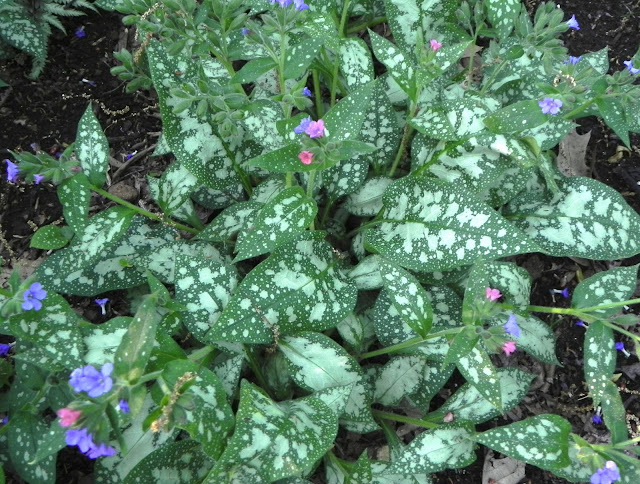 An even more striking foliage plant in my view is Pulmonaria spp.  I think we planted just a few; now they have proliferated in scattered locations in the woods.  I love the leaf patterns; the flowers are a bonus in the early spring but don't last long. 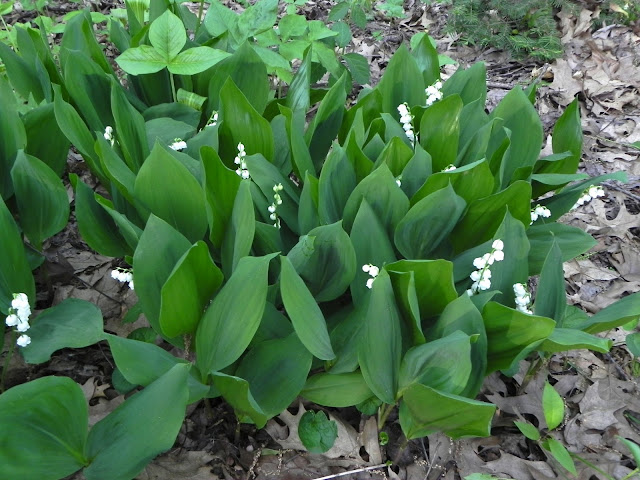 These Lilies of the Valley came to us in an exchange with a neighbor to whom we donated some of the pulmonaria.  The other flowers in bloom this week include the bleeding hearts (photo at the top of this post), phlox, trillium, bluebells, dandelions, wild geraniums and violets. 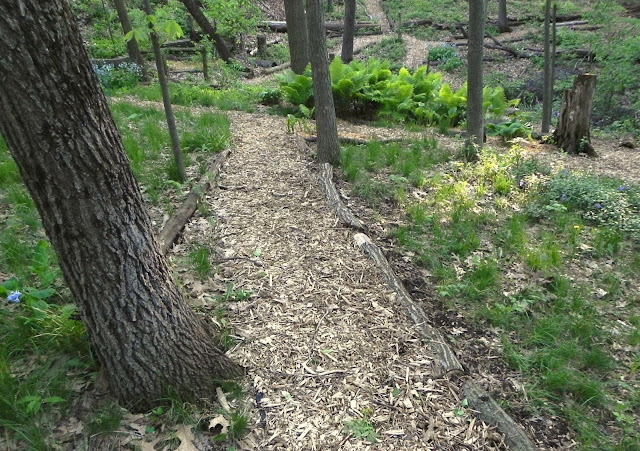 Last fall I spent uncounted hours laying down landscape fabric and then dragging tarps full of hardwood mulch to the woods to create walking paths.   There's still lots of work to do to finish the paths (I'm laying down logs from the cut trees and partially embedding them on the sides of the paths to keep the mulch from spreading.   The paths give me a more secure footing for walking and also subdivide the garden into areas where we can experiment with different botanical combinations. 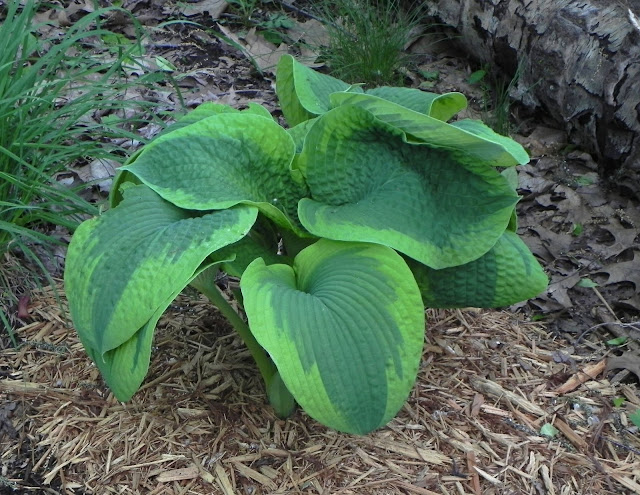 This hosta was the first one I planted in the woods after I spent the better part of probably two summers grubbing out the buckthorn and honeysuckle underbrush by the roots.  The soil back here is black loam several inches deep, and the other plants love it once you remove the invasives that steal all the water and light.  This fellow will be huge by the end of the summer; I probably should subdivide him. 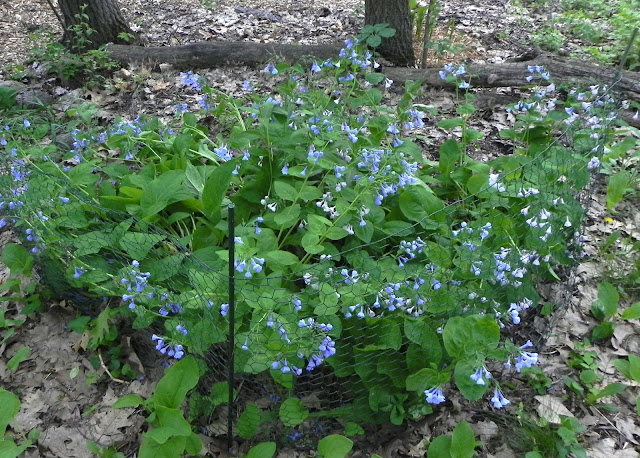 We've added bluebells; these are not the English bluebells that you see in immense masses in the forests of the National Trust in Britain.  I put chicken wire around this cluster this week to keep the rabbits at bay, because we want to harvest the seeds to scatter in other areas of the woods.  Last summer the rabbits nibbled these down to the ground. 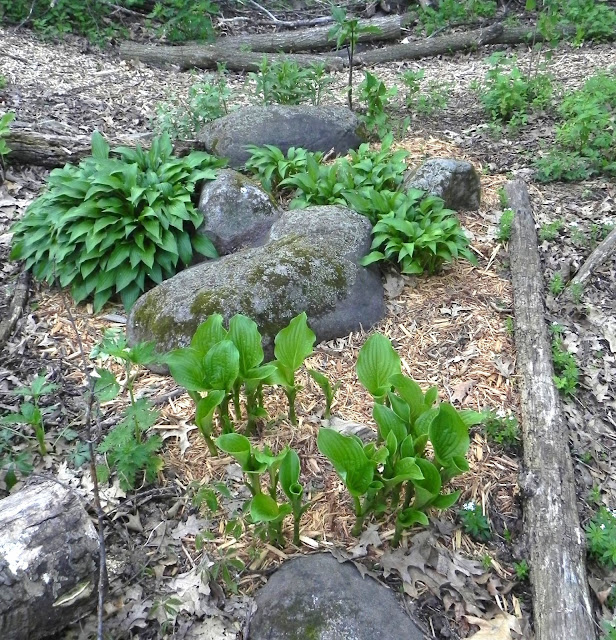 It makes sense to incorporate some landscape features into the planting scheme (and it makes way more sense than trying to move them).  Here three varieties of hosta cluster around a set of large boulders. 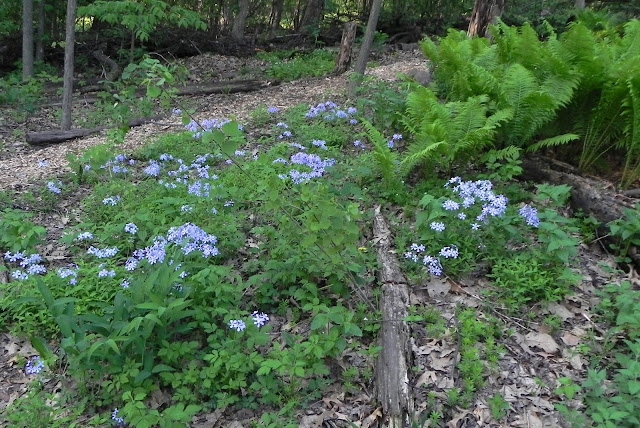 Some phlox was initially planted in the center of this area; it has now spread up and down the hillside.  The ferns are escaping from their bed and may have to be restrained because they will shade out everything else, and they are aggressive spreaders in soil like this.


A felicitous combination of plants - Jacks in the Pulpit at the far left just getting started, a variegated hosta, a Pulmonaria cluster, and at the far right some native violets. 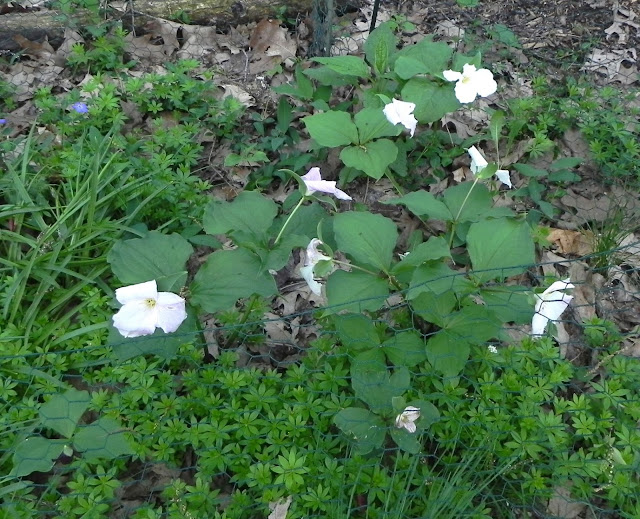 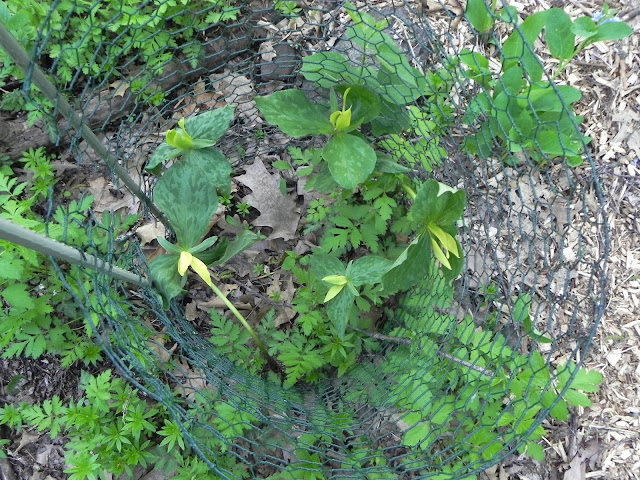 Both the white trillium and the yellow ones need some protection from rabbits until they manage to spread to some distant locations.  The chicken wire is unattractive and "unnatural,", but is a temporary means to an end. 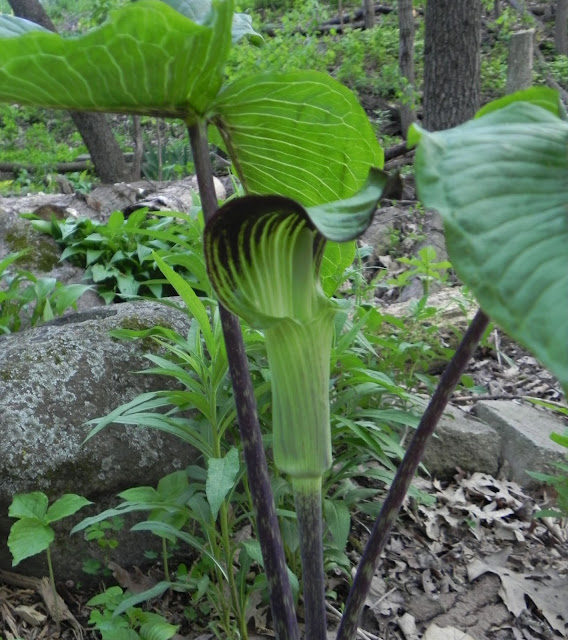 I really enjoy having Jacks-in-the-pulpit (Arisaema triphyllum) in the woods.  Never had to plant them; the year after I got out all the invasive underbrush, a couple Jacks emerged.  Now there are hundreds of them; the largest/oldest ones in the woods get as high as my thigh.

Last fall I wrote a post for this blog about propagating Jacks; I heard recently from my friend that her transplants have emerged and appear healthy.

I'll be back out in the woods and yard in the days to come.  Also facing the annual monster chore of Cleaning The Garage.  And hobby and family stuff is accelerating - and the Monarchs will be arriving within a week or so.  So the blog posts will be fewer for the next several weeks.

Reposted from 2013 to add some additional photos: 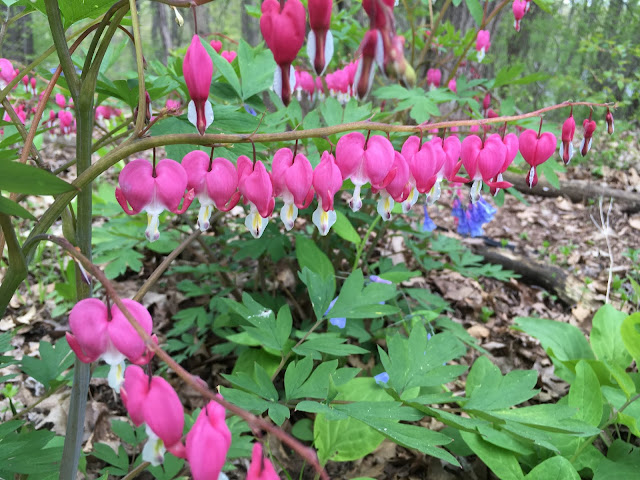 The bleeding hearts are five years older and the plants somewhat bigger.  I think there are more "hearts" in each array now, but that may be my imagination. 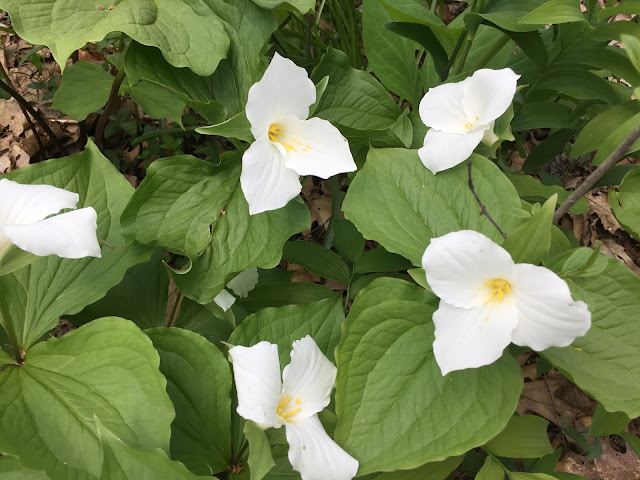 The trillium are also larger and more numerous, but the area they cover has increased only by a couple square meters, with only a few outliers beyond the original cluster.  That rate of change makes one appreciate how many centuries it must have required when they eventually cover a forest floor as far as one can see in every direction. 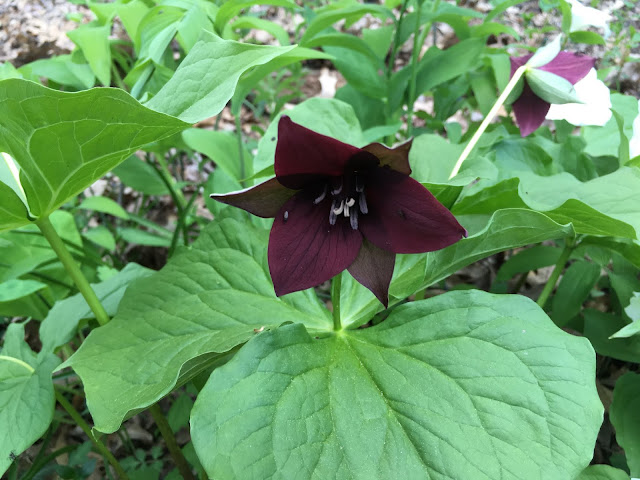 We now have some purple trillium, probably Trillium flexipes ("bent trillium") rather than Trillium erectum, which are native to eastern woodlands, and which I used to love to photograph when I lived in Kentucky.  I've not seen them native in Minnesota/Wisconsin but maybe I haven't walked enough woods.  They also have multiplied slowly; I think the oxalic acid in their leaves protects them from rabbit predation. 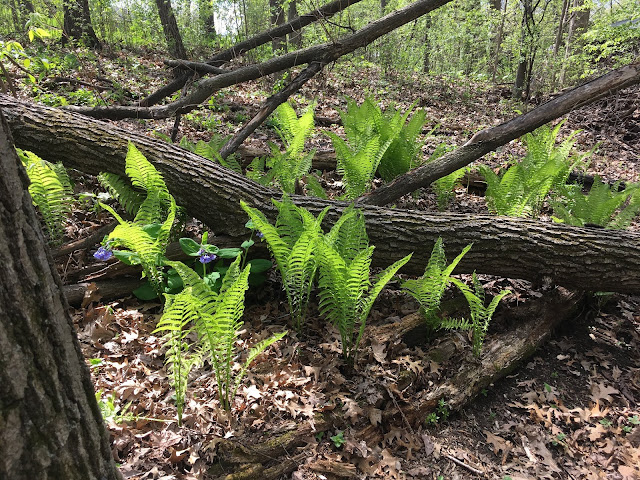 Two winters ago a large oak fell in our woods.  It wasn't practicable to harvest the wood, and the work of removing the deadfall would have been enormous because of its size, so it now serves as a new "feature" on that slope - and provides a handy place to sit and rest one's gluteus maximus while gardening.  Also a nice contrast to the ferns backlit by the late-afternoon sun.