Wealth inequality in the U.S. - updated 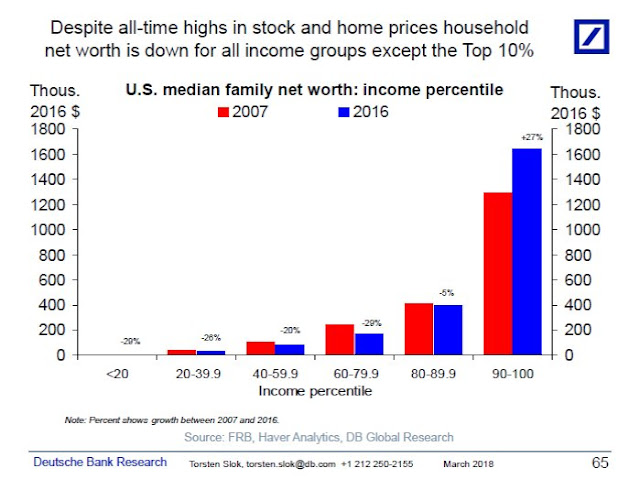 According to Torsten Sløk, the chief international economist at Deutsche Bank Securities, income inequality is a major factor that has been holding back the U.S. economy for nearly a decade.

“One important reason why the expansion since 2009 has been so weak is that wealth gains have been unevenly distributed,” he wrote. “A decline in the homeownership rate and the number of households holding stocks has dampened consumer spending growth for the bottom 90% of households.”

Per his data, the median net worth for all income percentiles except the wealthiest one dropped between 2007 and 2016, usually by double-digit amounts.

The wealthy and the corporate CEOs continue to recite the mantra that wealth "trickles down."

"We must make our choice.  We may have democracy, or we may have wealth concentrated in the hands of a few, but we can't have both."

The chart at the top of the post reported data up through 2016.  A new report by the Federal Reserve includes data through 2018, and presents it in a graph that is more intuitive for interpreting: 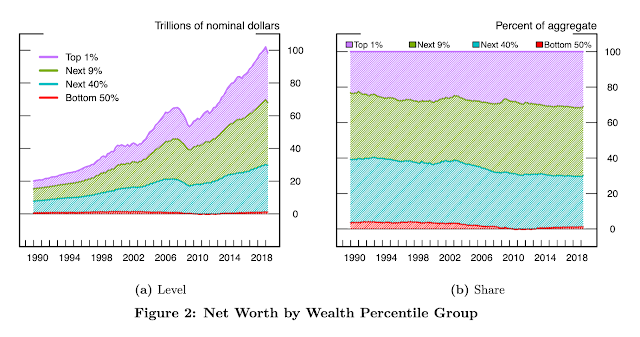 
Deutsche Bank’s Torsten Sløk says that the distribution of household wealth in America has become even more disproportionate over the past decade, with the richest 10% of U.S. households representing 70% of all U.S. wealth in 2018, compared with 60% in 1989...

To make a finer point, Fed researchers say the increase in wealth among the top 10% is largely a result of that cohort obtaining a larger concentration of assets: “The share of assets held by the top 10% of the wealth distribution rose from 55% to 64% since 1989, with asset shares increasing the most for the top 1% of households. These increases were mirrored by decreases for households in the 50-90th percentiles of the wealth distribution,” Fed researchers said.

Sløk said the financial crisis has played a significant part in this growing gap, which resulted in the Federal Reserve stepping in to stem a massive ripple of losses through the global financial system as the housing market imploded.

As a result, the Fed lowered interest rates, which had the knock-on effect of pushing easy money into the hands of the already-wealthy.

An extensive detailed discussion is at the Federal Reserve report, with additional data and graphs.