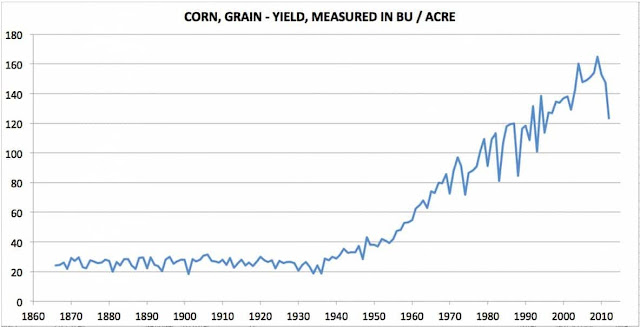 
Today, the United States is the largest producer and consumer of corn — and by a long shot. Corn is in the sodas Americans drink and the potato chips they snack on; it's in hamburgers and french fries, sauces and salad dressings, baked goods, breakfast cereals, virtually all poultry, and even most fish...

In the 1920s and 1930s, scientists discovered a way to boost corn production to a level that was previously unthinkable. They bred hybrid strains that had larger ears and could be grown closer together, which allowed farmers to produce a lot more corn without more land. The discovery, coupled with the introduction of new industrial fertilizers and more efficient farm tools, such as tractors, led to a thunderous rise in output...

[In the 1930s, when my mother cultivated her family's cornfields with horse-drawn equipment, she cross-cultivated - first traversing the field east-west, then north-south.  That's how far apart the corn plants were.]


The most incredible thing about the corn grown in America today is how little of it we actually eat. Less than 10 percent of the corn used in the United States is directly ingested by humans. The bulk is either turned into ethanol, for use as fuel, or fed to the hundreds of millions of animals we raise. Cows, chickens, pigs and even fish, which are fed pellets made largely of corn, eat several times the amount of the grain consumed by people each year...

Sweet corn is what Americans grill in the summer, and boil or bake during the rest of the year. It's eaten on the cob. It gets stuck in your teeth. And it accounts for only about 1 percent of the corn grown in America...

Flint corn, which has a soft center and harder outer shell, is what most people know as popcorn...

And then there's dent corn, a.k.a. field corn, the most important kinds. It accounts for the vast majority of corn grown in America today..

This morning an article at Accuweather is entitled Trouble could be brewing for farmers in the US Corn Belt.


Corn planting is behind schedule in the United States because of the weather in four of the top six states for corn production -- and that situation is not expected to improve when the latest Crop Progress report is issued Monday by the U.S. Department of Agriculture (USDA), according to an AccuWeather analysis.

Illinois, Minnesota, Indiana and South Dakota are the four states significantly behind schedule and expected to remain that way, according to AccuWeather meteorologists who have been analyzing the data. Those four states combined produce nearly 40% of the corn in the U.S. If the weather continues a wet pattern through late May, consumer prices could go up this summer...

And note that based on the Washington Post article, a significant rise in corn prices will affect a broad array of products. 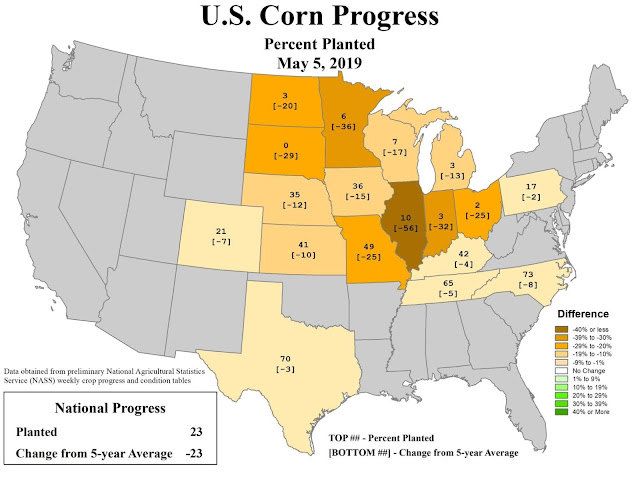 Addendum #2 (June):
The map above was for early May.  The one below depicts precipitation for the months of April and May, described not only as extreme but "biblical" in extent: 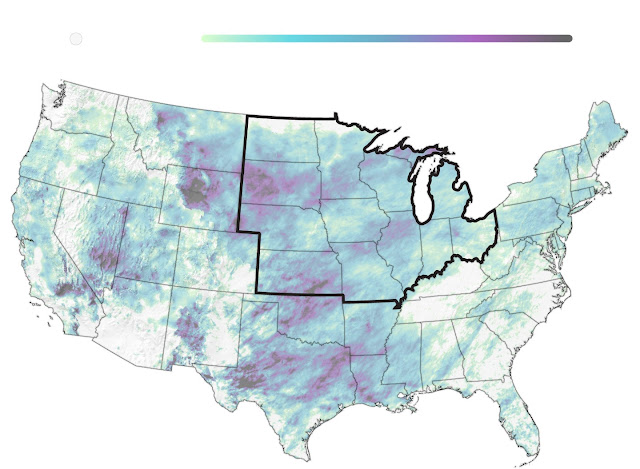 Here in Madison in early June I returned from an out-of-town errand yesterday, driving past farm fields that not only are not showing growth, but often had not even been planted.

Topsoil moisture is extremely high, and the question arises as to whether when farmers are able to get into their fields, will the late start mean they won't even be able to plant corn?