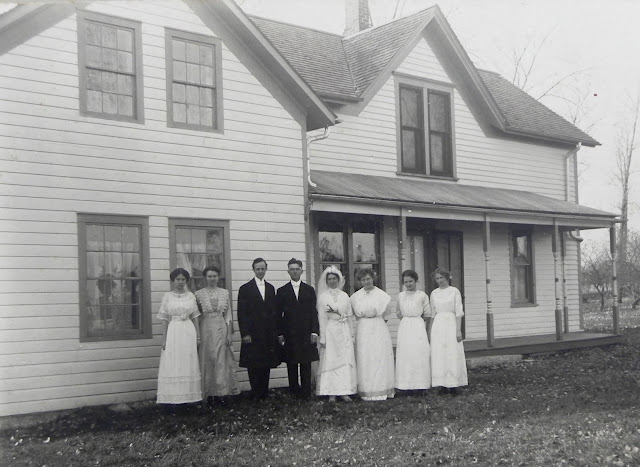 I was digitizing this old family photo yesterday to distribute to family members, when I noticed something odd. 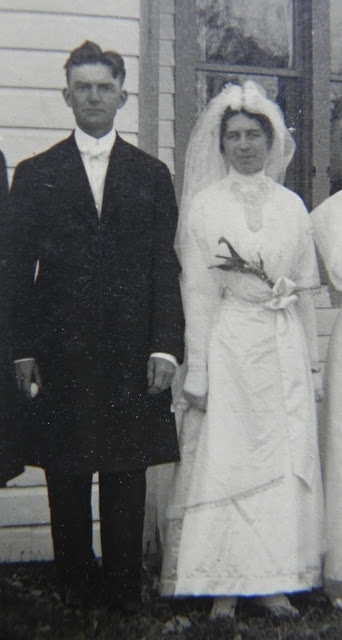 The occasion is the 1912 wedding of my maternal grandfather, Knut Olaus Finseth, to his new bride Selma Aline Distad.  They and the others in the wedding party are standing in front of their apparently-new home in rural Minnesota.  They were both teachers, but farming would become his full-time occupation.

As I zoomed the photo to view the bride and groom (in true Norwegian fashion holding in their abundant joy behind a dour visage), I noticed a white object in Grandfather Knut's right hand.  It looks ever so much like a golf ball, but I'm sure he would have consigned golf to the same category as pool and solitaire - as tools of the Devil to distract people from their chores.  So what is it?

I would venture to guess it might be an egg.  I am not sufficiently au fait with traditional Norwegian wedding customs to know whether an egg might be incorporated into the festivities as a token of fertility.  Or maybe he just came from the henhouse...

I also don't know what the raptor-talon-shaped object is at my grandmother's waist.  Her left arm is at her side, so I presume it is some kind of floral bouquet tucked into her waistband.  Both of them were very much old-country traditionalists, so again there may be some symbolism involved.

The Finseths arrive in the United States. 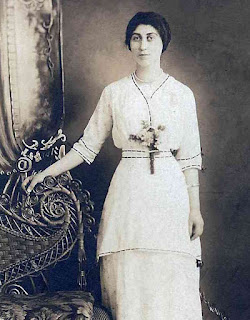 Addendum:
A hat tip to an anonymous reader, who found the photo
at the right (cropped from the original here), showing a woman from approximately the same time period wearing a "waist corsage."

I did find a writeup of the wedding in the Olmstead County Democrat which says that my grandmother "was attired in marquisette over messaline" and that she and the bridesmaids carried pink and white roses.

I suspect the white flowers are just inapparent against the white dress in the wedding photo.

Of interest, the wedding report also notes that "following the plighting of vows, a seven-course dinner was served to sixty guests."  That would have been prepared on a wood-burning stove...

Now if I could only figure out about that egg in grandpa's hand.  I'll see if anyone in the family can track down an elderly Norwegian relative...

Reposted from 2015 to add this contemporary wedding photo that was enhanced by the unexpected appearance of a pig: 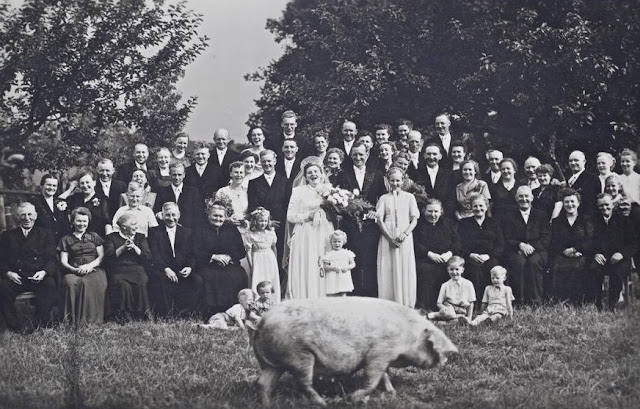